101 Not So Random Encounters: Forest Kingdom

101 Not So Random Encounters: Forest Kingdom 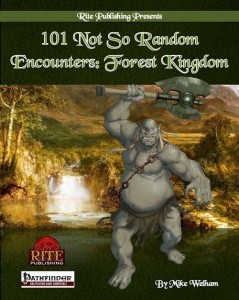 This pdf clocks in at 48 pages, 1 page front cover, 1 page editorial, 1 page SRD, leaving us with a more than massive array of 45 pages, so let’s take a look!

The 101 Not So Random Encounters-series has been a delight to read – beyond just adding certain creatures, it provides iconic creatures and NPCs, ranging throughout the CRs (in this case from CR 23 to CR 1/3). The basic, central benefit of these encounters, though, would be that they essentially tell a story that is linked, should you choose to use them in conjunction.

While the statblock of the CR 23 Vine creature hamadryad druid 8, Vessa Broadleaf, may be a glorious build, what makes this book awesome goes beyond that – she essentially is the mastermind behind the conspiracy of which the respective encounters are components and each of the individual encounters tie in with others, making this essentially a massive, huge collection of diverse encounters that, by design can be woven into a tapestry of a campaign…or a subplot thereof.

Which brings me to the second component of this pdf one should know about – the campaign-spanning meta-plot implied by these encounters ties in perfectly with Kingmaker – this is an AP-plug-in if ever there was one. Especially in Kingmaker, this makes sense – with a metaplot that takes a backseat in favor of Kingdom-building rules, the interwoven encounters, when applied to the AP, net a sense of cohesion of the metaplot that is not particularly pronounced in the otherwise great AP.

Now don’t get me wrong – the massive conspiracy (which I try to avoid spoiling in this review), can stand on its own – this supplement essentially delivers enough plot to act as a whole, full-blown campaign. Now another thing I can tell you without spoiling the awesome writing, would be the fact that not all encounters belong to the same monolithic entity of an organization – rather than that, some of the creatures herein are generally opposed to one another, with an array of them serving as foils and red herrings for the true end-game of the hamadryad.

Beyond a neat assortment of cool encounters and fluff-only write-ups, we also, quite often, in fact, receive cool and relatively complex statblocks…and unique creatures. What about Mandragora swarms? Or the dread irlgaunt? What about an accelerated giant swamp eel or the Blodeunwedd with their allergen auras? Fiendish plants that collapse into brown mold? It should also be noted that a two-page appendix reprints e.g. Black Rots and Living Lakes for those not owning ToHC, making the pdf rather user-friendly.

Editing and formatting are top-notch, I didn’t notice any glitches. Layout adheres to RiP’s 2-column full-color standard, with nice borders of a thematically-fitting extract of stock art. The pdf comes with a plethora of different full color artworks that fit the theme. I have not seen any of the artworks before in other publications, so kudos for that.

Mike Welham’s massive collection of encounters is perhaps the single most inexpensive, easy way to make the Kingmaker AP more awesome – and its essentially a rough draft for a whole AP in one neat book. It’s functionality does not end there, though, for thankfully the ideas for these glorious encounters can easily be scavenged for just about any woodland/forest/swampy environment, taken apart – even on their own, the encounters rock. I did my very best to prevent spoiling the meat of these awesome encounters, but rest assured this collection is simply glorious – and well worth 5 stars + seal of approval . This vastly improves Kingmaker et al. and should be considered one of the best bang-for-buck-ratios to improve an AP.

You can get this awesome, inexpensive supplement here on OBS and here on d20pfsrd.com’s shop!