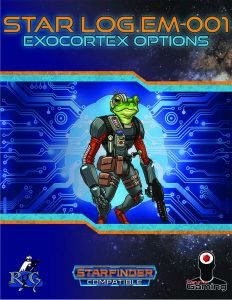 This small supplement for Starfinder clocks in at 8 pages, 1 page front cover, 1 page editorial, 2 pages of advertisement, 1.5 pages of SRD, leaving us with 2.5 pages of content, so let’s take a look!

So, this time around,w e take a look at new options for the exocortex choice of the mechanic – at 2nd level or higher, mechanics get 3 new choices for mechanic tricks: Enemy database builds on combat tracking: When you’re tracking a foe, you may substitute Computers to identify the tracked creature instead of using the usual skill; however, failed attempts can only be retried after 10 minutes, at which point you may take 20 on the skill as though accessing a database. The Exocortex datajack makes the exocortex count as a datajack with an item level equal to your mechanic level, allowing for combination with a custom rig. If connected to a network or data set, you may make Computers to recall information related to a variety of skills. As per the clarification-request of one of my readers: The exocortex gains the ability to work as a datajack, freeing your brain augment slot. This exocortex datajack may by used with custom rigs, etc.

Improved combat tracking lets you attempt an identification of a tracked creature when attacking with a special property or small/long arm – on a success, the attack deals + class level damage. This stacks with Weapon Specialization. Only one target takes this bonus damage, if multiple ones are targeted.

There also are 3 tricks unlocked at 8th level – the first would be AI Usurpation: The exocortex must have access to the system to hack and uploading the exocortex into the system is a move action – a total of 2d4 rounds need to be expended thus, and the exocortex uploaded behaves like an AI using your social skills and only obeys your spoken command. While thus uploaded, you lose all exocortex abilities and mechanic tricks tied to the exocortex. Instead, you gain an untyped bonus on all Computer, Engineering and Piloting checks involving the hacked vessel. Additionally, this bonus extends to starship stunts and crew actions and you may spend 1 Resolve Point at the start of the round to gain an additional crew action. If unused, said action is lost, as is the Resolve Point. Downloading the AI again also takes time, and losing it lets you replace it without much hassle. While uploaded, the AI can’t fill a starship crew role.

Martial rewire lets you treat your mechanic level as BAB for prerequisite purposes of combat feats. You select 3 combat feats for which you meet the prerequisites. As a move action, you can have your muscle memory rewired, gaining one of these feats until you spend a Resolve Point and have a 10-minute rest to regain Stamina, at which point you can change the feat you have access to. Upon gaining a level, you can change the combat feats in question. Enhanced memory lets you reroll Int-based skill checks, even if not recalling. You may also spend 1 Resolve Point as a reaction to failing such a check, gaining a reroll at +5.

Finally, there are two tricks that are unlocked at 14th level – the first of these would be construct usurpation, which does what it says on the tin, thankfully with a CR-cap and a temporary duration – this duplicates control machines (not italicized) in a way, with the AI handling concentration, allowing you to act normally. Nice balancing tool: 1/24 hour caveat. Enhanced martial rewire nets you a second set of 3 combat feats to choose from, and allows you to access two of your pool of 6 at once.

Editing and formatting, on both a formal and a rules-language level, are very good. No complaints here, apart from a missed italicization. Layout adheres to a nice, colorful two-column full-color standard. The artwork featured is nice and the pdf has no bookmarks, but needs none at this length.

Alexander Augunas’ exocortex options makes sense to me – while the added crew action is potent, it makes sense to me – so do the virtual feats. Note that RAW, martial rewiring does not allow you to stack combat feats due to the prerequisite fulfillment caveat, which prevents abuse of feat trees there – breadth instead of depth. As a whole, I enjoyed this supplement and consider it to be a sensible addition to the mechanic’s options. Hence, my final verdict will clock in at 5 stars.