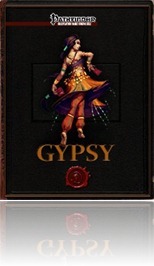 I’m not going to get into any political correctness discussions, as this is a supplement for a fantasy game. We have individuals with pointy ears and tusks in our game. That being said, in irl, I’m rather intrigued by e.g. the Sinti and Roma and their rich tradition of unconventional folklore – if you’re looking for some inspiration, their legends and fairy-tales offer a rich backdrop of potential hooks. That being said, in game I’ve been in love with mysterious gypsy-characters ever since the vistana of Ravenloft.

That out of the way, I was looking forward to this base-class, which gets d6, 6+Int skills per level, simple and some light bladed weapon proficiency and light armor proficiency, bad BAB, good ref and will-saves and full spellcasting progression. It is also this spellcasting that makes for the most interesting aspect of the gypsy-class – they cast via a so-called deck of divinations, i.e. a stack of Tarot-like special cards that expands over the levels.

The gypsy chooses a spell from ANY spell-list and makes a card of this spell. Only one version of each spell may be kept in the deck, no metamagic feats maybe applied, all spells are considered divine and there’s another catch to offset the supreme access to spell-lists: Every day, the deck is shuffled and put face down. As a swift action, the Gypsy may draw the top-most card and then activate the spell depicted by the card via standard casting time or discard it to the discard pile, thus forfeiting usage of the spell until resting and reshuffling the deck. More interesting, starting at 2nd level and every even level after that, the Gypsy can create an augury-card selected from 20 auguries. These special cards are shuffled as well into the deck and provide supernatural bonuses and are mostly (though not all) designed after classic motives of the Tarot-deck – The hanged Man, for example, when drawn, grants the gypsy’s entire party (defined as PCs & cohorts) fast healing equal to the gypsy’s class-level for half of her class levels. If anyone of the recipients takes a standard or full-round action, the effect ends. If the effect runs for the whole duration, everyone is targeted by a single restoration spell and at higher levels, even a greater restoration. A cool balance of a massively useful effect with a strict limitation to ensure balance. Starting at 12th level, a gypsy may also select one of 10 greater auguries instead, even more powerful cards for inclusion into the deck. At higher levels, you can thus also gain the option of drawing from the deck, discarding spells and abilities until an aforementioned card is drawn or even include two versions of a given card within your deck, which still count against your card maximum, though.

The gypsy also gains visions via the Premonition abilities and let me tell you: I LOVE this ability – essentially, the base-chance is 70%+1% per gypsy-level and I had a half-vistani character in my game once that had a similar ability and it’s story-writing/roleplaying GOLD. As a DM, you can easily foreshadow deadly ambushes, clues, hints etc. and the ability is just plain awesome and can be used more often at higher levels. Very cool fluffy ability.

The pdf also includes a page of faces and one of backs for decks of divination you can print out and glue to cardboard if you want to make your very own deck of divination and apart from some tips, Dreadfox Games has also released an extra pdf of tips for using this uncommon class.

Editing and formatting are top-notch and I didn’t notice any glitches. Layout adheres to a 2-column standard with sepia background and a thorny black border and features a beautiful full-color artwork of the Gypsy by Jeff Hill as well as a b/w-sketch of a gypsy. The pdf has no bookmarks. First of all, let me say that I applaud Dreadfox Games’ guts in making this class, for the gypsy is completely different from any other class released for PFRPG and oozes flavor. However, that’s also one of the drawbacks of this pdf: The deck of divination provides ultimate spell access, but at the price of being controllable. If you’re looking for an optimized character, the gypsy might not be for you and a given party has to be aware of the unreliable nature of all of the gypsy’s significant effects, from spellcasting to the exciting augury-cards. A draw in combat could deliver just what you’re looking for, or provide just a wasted spell. Due to the inability to apply metamagic feats to the spells, modification of the effects is not possible in any significant amount and much of the gypsy’s utility is up to chance. While this limitation is by design, a given group should be aware of it and practice lenience, especially when the player seeks to draw a particular card and just doesn’t manage to draw it.

Seeing that the gypsy suffers from bad BAB and HD, combat utility can be considered at the lower end of the spectrum due to its unreliability. That being said, the gypsy might still be a cool addition for your game and will find its way into my home-game, albeit only as a NPC-class and with at least some modicum of control. A feat or similar ways to at least partially draw the cards you’re looking for, accessible at low levels, would have gone a long way of improving the gypsy, as would archetypes.

However, there is more to be aware of: If you’re like me and allow access to A LOT of books, more spells might mean more power and a daunting task of spell-selection indeed – add RiP’s 1001 spells, 330 Spell Variants by SGG etc. and you get a wide, wide array of potential, which might work in favor or against the class. Some advice for DMs on how to expand the options for deck in-game would have been appreciated.

The second gripe I have is the pricing of the class. The gypsy, while professionally done, costs $4.99, which is about the price you for example pay for a Frog God Games adventure. While SGG and RiP don’t have the one piece of full color artwork, their class-supplements are much cheaper: RiP’s excellent Luckbringer costs $2.99, as does SGG’s Godling or Time Thief. SGG’s Anachronistic Adventurer “the Investigator” provides 21 1/3 pages of raw content versus the gypsy’s 10 pages, including excellent research rules and excellent archetypes for $4.99. The poor gypsy-class does not gain alternate class options, feats, archetypes or any other form of bonus content, which is a pity, for not all of the cards of Tarot are covered by auguries and greater auguries. This lack of content hurts the pdf and makes me downgrade my final verdict by another star.

In the end, one has to acknowledge that the class is not for everyone – while I liked several of the ideas, I didn’t feel the urge to play the gypsy as a player or to yell eureka – while the deck is imaginative and players who love waving rods of wonders around in climactic battles will love the more controlled game of chance the gypsy provides, but nevertheless a nagging sense of not reliably adequately filling any role in an adventure group remains. If you’re only in it for the fluff and consider the unreliability fun, this class might be 3.5 stars for you. If you, however, want archetypes, feats, or even the whole tarot-deck covered via auguries, you’ll be disappointed. And then there’s the pricing. While we do get a professionally presented book, the amount of content is far below what similar products from other 3pps offer, without having an edge over them in quality that would justify the price-point. Dreadfox Games offers a subscription as a way to somewhat alleviate costs, but paying for a subscription of a relatively new company without an extensive track-record of quality is not something I’ll do. My final verdict for the gypsy, as much as it pains me to do so, can only be 2.5 stars – while personally I like the class, it suffers from rough edges, can lead to annoyed players (“You can’t ever draw the right cards, can you?”) and offers not enough content for the rather steep price point. Nevertheless, it’s innovative and interesting and thus, I’ll round up for the purposes of this platform.

Gypsy is available from: