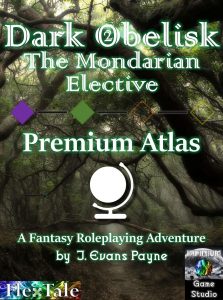 The massive Atlas-supplement for Dark Obelisk II: The Mondarian Elective, clocks in at 479 pages, already minus editorial, front/back cover, etc.

I STRONGLY suggest getting this book if you’re planning on playing Dark Obelisk II – it is almost required.

This review was moved up in my reviewing queue due to me receiving a print copy in exchange for a fair and unbiased review.

So, as usual for the hardcovers produced by Infinium Game Studios, this is a HUGE tome, with proper notes on the spine and color-coded bands on the side that allow you to immediately jump to the proper maps for a given level/environment, making navigation of this huge tome of maps quick and simple in the physical version as well. In the pdf, you can use multi-letter search-codes to immediately find the proper map.

The first half of the book provides the GM-maps – with secret doors, numbers, etc. all provided, just like in the regular adventure book; as noted in my review of Dark Obelisk II, the cartography of these maps has VASTLY improved over the ones featured for the first adventure. While it is evident that software as used here, I have never seen one employed so well: Different tables, chairs and objects, different types of spider webs – this is all lavishly-handcrafted, and the constructions do make sense, everything feels organic, lived in, or formerly lived-in. The cartography is exceedingly impressive.

The Dark Obelisk II-adventure is mainly compelling due to its detail-oriented approach; this is very much underlined by some of its challenges. For example, there is an inconspicuous pile of barrels and crates, with a blank space between their massive piles. That space conceals a trapdoor, which is properly depicted in the GM-map. In the player-friendly version, it’s just a piece of ground! That sort of level of care is frankly amazing to see. I wished every module went to that length.

So, all fantastic? Alas, no. You see, the city and dungeon depicted in Dark Obelisk II have more than one such hidden area that was redacted from the respective overview maps. It’s great that they’re redacted.

But what once the PCs have found one such area?

Well, unfortunately, these secret areas, out of some unfathomable reason, LACK player-friendly maps! This makes no sense, and remains the one big strike against the atlas, and it is one that seriously hurts it, considering that the convenience of the player-friendly maps is a core selling point of the book.

I already commented on the hardcover version; the pdf-iteration comes in two versions, with one printer-friendly iteration and a regular one; the regular iteration is properly bookmarked. The supplement comes with several archives containing the maps in jpg-versions.

The full-color cartography contained in this tome is massive, excessively detailed, makes the environments feel organic and alive, and as a whole can be considered to be a great success for J. Evans Payne. Unfortunately, this triumph is somewhat diminished by the utterly puzzling decision to get leave out player-friendly versions of the secret areas. While certainly not enough to sink this tome, it does represent a serious blemish, which is while my final verdict will clock in at 4 stars.

You can get this gigantic tome of maps here on OBS!