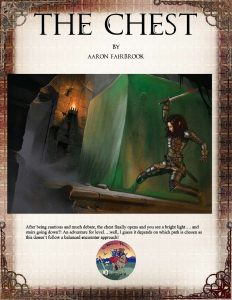 This module clocks in at 16 pages, 1 page front cover, ½ a page editorial (the other half is an introduction/how to use), 1 page SRD, 2 pages of advertisement, and 1 page back cover, leaving us with 10.5 pages of content, so let’s take a look!

Okay, so as always for The Merciless Merchants, the rules-system employed is For Gold & Glory – based on second edition AD&D. Ultimately, this means that adaption to e.g. OSRIC is super simple, and that there is a lot of information given – We have size categories, morale, activity cycles (!!), organization etc. noted for creatures. Attack values use the good ole’ THAC0 ( What we knew as ETW0, for all fellow Germans reading this…), and HD-ratings as well as descending AC are standards. As you can see, conversion to other old-school systems thus is pretty simple. 7 new monsters are presented, and these do come with a bit of information on them, and a separate combat section that explains the more unusual properties of the creatures.

The pdf comes with a b/w map that deserves special applause, in spite of not featuring an extra key-less, player-friendly version. Why? Well, the secret doors with their obtrusive “S”s that SPOILER players? For the most part (but not in all instances, alas, they form a straight line with the walls – so in most instances, you can cut up a printout of the map, and the PCs will be none the wiser, for the telltale “S”-secret-door blocks are beyond the wall. I like this, and with the exception of a few of them, this does render the dungeon easier to use for the GM. Speaking of GM-convenience: While we do not get read-aloud text, dark areas are noted FIRST in descriptions; then, a comprehensive description (that makes most read-aloud texts hang their head in shame) follows – further information is presented in concise bullet points, which makes parsing information simple and convenient.

Now, this is a dungeon adventure and an old-school module – it is not designated for a specific level-range, and there is a reason for that. While low-level parties can very much successfully explore quite a few of the rooms herein, there also are more deadly environments that are designed to challenge mid-level characters – this complex is intended as a campaign-accompaniment, as a kind of downtime module, if you will. So yeah, to master this module, the PCs will have to attain mid-level range. Design-wise, the module is excellent – while there is e.g. a riddle door, failing to answer correctly does not stump progress – instead, success allows for the avoidance of an encounter. Traps are telegraphed in a way that is not too obvious, but remains fair. The module comes with a wandering encounter table as well as a couple of magic items, but the main treasure provided here is something else. It should also be noted that there is an inherent logic to the complex presented and the presence of all adversaries. Oh, and this module can be seamlessly inserted into ANY conceivable campaign, at any time, any place. How does it do that?

Well, this is as far as I can go without diving into SPOILERS. Potential players should REALLY jump ahead to the conclusion.

All right, only GMs around? Great! So, the eponymous chest can be found any place you want it to be. The PCs will do the usual routine (check for traps, etc.), and then open it. There is no treasure inside. There are no traps. Instead, they see an impossible stairway leading down. The chest may be moved – it is an entrance to a demiplane of sorts, and full exploration of the place within, understanding how it operates, will allow the PCs to claim mastery and ownership of it.

Inside, there is a vault of sorts – the central hub rooms feature doors associated with different valuables – copper, silver – you get the idea. The chest spawns guardians appropriate for the respective region, and its depths also hide a kind of refuge…though that has been compromised. The aforementioned monsters mainly feature guardians associated with the precious metals, though e.g. skittering coin scarabs and a jewel golem may also be found. See, and this is where the variable difficulty curve comes into play: The copper region is pretty easy, while the refuge and the more valuable regions can be pretty deadly indeed. The greed of the PCs and players, their own willingness to take risks, very much governs the difficulty of this adventure.

Note that both players and PCs will find out the operation of this complex without requiring the rolling of the dice – the module is structured in a clever manner that way, and in case you do want to fill the party in on lore, there is a friendly gold dragon as one of the guardians. He does not attack, and can tell the PCs that something bad has happened. Turns out that a somewhat psychedelic monster (think eye-studded pyramid with tendrils that can shoot beholder-lite effects!) has intruded upon this place – and that the best-guarded door, currently sealed, seals the monstrosity as well. This is a brutal boss, but the party will have to face the monster sooner or later if they want to claim ownership of the chest…and they will want to do that. Safe, a secure place to rest, unfathomable potential for infiltrations, means to lure in enemies – the potential this magic item has? It’s staggering. (And the intruder creatures? The GM can use them as a means to discourage abuse of this potent tool…)

Editing and formatting are very good – while not perfect, the module is presented in a manner that will not result in issues for the GM, with precious few minor hiccups (such as a homophone error of waste/waist). Layout adheres to an elegant, old-school two-column standard that primarily presents nice b/w-artworks. While these are stock pieces, they perfectly fit what they depict and are rare ones – i.e. I haven’t seen them used in a ton of other supplements. The pdf does not have bookmarks, which is a slight comfort-detriment, but at this length still okay. The cartography in b/w, with its grid properly noted, is nice – as mentioned above, I wish the secret doors had been imperceptible in all instances, but that is a minor nitpick.

Aaron Fairbrook’s small adventure blows whole lines of adventures out of the water without even trying. It presents a module that is super easy to integrate into any campaign; it is clever, features a unique reward, is VERY inexpensive considering the quality provided, and it’s not boring. It is a genuinely creative, cool adventure that knows exactly what it is – it doesn’t try to aim for a world-ending plot, instead presenting a humble adventure that exemplifies how you can achieve excellence with even the tiniest of underdog budgets. This is an adventure that is both well-written, and well-designed, and precious few adventures genuinely get me this excited anymore….something that’s even harder to achieve when considering the limited scope and room this has. I could list a whole series of publishers that don’t have a single module as compelling as this humble mini-adventure.

It’s not perfect; the magic items found in the dungeon are not particularly mind-boggling for the most part, though I did love the glove that lets you call a fully statted silver falcon – come on, that’s cool! That being said, considering the goal and the price point, this is a no-brainer module that you definitely should check out! My final verdict will be 5 stars + seal of approval. And if you like what you’re seeing, please also check out the City of Vermilion kickstarter – I so want this mega-adventure to fund! The Merciless Merchants definitely deserve it, and I want their mega-adventure in a gorgeous Friesens-hardcover!

You can get this little gem of a module here on OBS!

You can support The Merciless Merchants here on patreon!

Please consider supporting the City of Vermilion mega-adventure they are trying to fund – when I think of what they can do with a genuine budget, I start salivating…

If you consider my reviews to be helpful and can afford it, I’d appreciate a donation or joining my patreon. Every bit helps