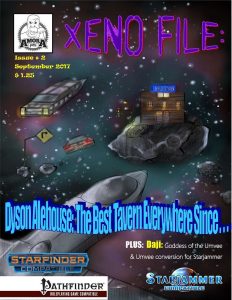 So, this time around, we visit the Dyson Alehouse, which is basically a Western saloon coated in chrome and steel plates, docking stations scattered around…and a single automatic door at the front of the building. Okay, yes, antennae and neon lights are added as well, but still – a really surreal and intriguing place….though the inside is truly futuristic, with every section covered with doors, apertures and portholes and a bar of silver metal, tended by an insectoid android. In order to get a drink, the PCs will have to actually talk to it – and there is only a 50-50-chance it’ll respond in a broken dialect of their language: Basically, they have to get a ticket (visually represented in the file!) from a terminal. In order to get this ticket, the PCs will have to enter gold coins. Nope, not credits, gold coins. 100 of them. For that, the machine will spit out a 10-drink coupon. Where do the PCs get gold coins?

Well, you see, while the countless doors in Dyson’s can lead pretty much anywhere – there are basically fully-functional wormholes, making this a scifi-version of the traditional extra-planar tavern-hub trope. 3 sample more or less fixed destinations are mentioned, including a Valhalla-style meadhall. The tavern does not gain a proper map or the like, but we get a serious amount of different tables: There are 20 drink descriptions and 20 effects, for example: These btw. include falling unconscious sans save, hallucinations, recalling one’s fondest memories or getting transparent skin, etc. Another table lets you determine descriptions, shapes and miscellaneous qualities of a wormhole-door with 20 entries each. Now, each of the myriad rooms that connect to the tavern also has its own, strange rules – and a huge table provides all the material you need to craft adventure-hooks based on them: No less than 100 entries for rules, punishments and clientele of a given room can be found. We also get some advice on how to use the alehouse.

As far as supplemental content is concerned, we get two different articles: the first would be Daji, living goddess of the umvee (including a basic, subdomain-less PFRPG deity-write-up). The second article would be a conversion of the Umvee to PFRPG: +2 Constitution, +2 “Intelligaince”[sic!], -2 Charisma. The race is Medium, kemonomimi subtype. They get +2 to Survival and Handle Animals, limited telepathy…and the caste conversion has some glitches. Alphas mention e.g. Stamina increases per level, which *MAY* tie in with PFU’s rules, but I’m not sure. Betas get to choose two skills from Bluff, Diplomacy, intimidate and Sense Motive and get +1 to the skills chosen. Omegas get +1 to Knowledge (religion) and (arcana) and +2 to CL-checks and Zeats get +2 to saves versus disease, poison, becoming nauseated and sickened as well as mind-affecting effects. Not a bad conversion per se, but neither an inspired one.

Editing and formatting are okay; while I noticed a couple minor and avoidable hiccups in the pretty thin crunch, they did not overly detract from my enjoyment of the pdf. Layout adheres to a 2-column full-color standard (with 3 pages using 1-column instead); the pdf has no bookmarks, but doesn’t exactly need them at this length.

Chance Phillips and Greg LaRose provide a nice, inexpensive, almost system-agnostic supplement here…which may be slightly to the detriment of the supplement. You see, I very much like Dyson’s. The idea and aesthetics are cool – but I found myself wishing we got a map or at least stats for the barkeep. Similarly, being knocked out cold by a drink, sans save, is not something you get to see in SFRPG or PFRPG, for that matter. While easily remedied, it is small hiccups like this that make this feel a bit less refined than what I hoped to get. Similarly, the tie-ins to Starfinder’s mechanics could have been much stronger. While still an inexpensive and fun offering, Dyson’s thus falls into the realm of being a solid, if not perfect little supplement. Hence, my final verdict will clock in at 3.5 stars, rounded down for the purpose of this platform.