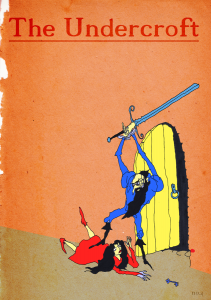 This installment of the Undercroft clocks in at 24 pages, minus one page if you take away the editorial; this is laid out, as always, in 6’’ by 9’’ (A5), so let’s take a look! My review is primarily based on the stitch-bound softcover version.

As always for the ‘zine, the rules employed are LotFP (Lamentations of the Flame Princess) rules, but conversion to other OSR rules-sets is not particularly taxing. Theme-wise, this is a horror-supplement; the easily-offended or squeamish need not apply.

So, let us begin with the crunchiest article contained within – penned by Marc “Lord Inar” Gacy, we have an alternate take on LotFP, attempting an engine to present a class-less system: Characters get 10 points at character creation, 4 on every subsequent level, and use the fighter’s experience progression. Saves start at Paralysis 14, poison 13, breath weapon 16, magic device 14, magic 15. The standard hit points gained are d4, with each subsequent die-size costing +1 point.; after 9th level, the fixed hp gained for free amount to 1, +1 per character point spent. An improvement to hit costs 2 pts; at 1st level, you can choose +2 to hit for 5 pts. An attack improvement may only be taken once per level. Saving throws may be taken twice at character creation, once per level. 2 points for +1 to each save, or for +2 to two of the five saves; for 1 pt., you get +1 to two of the five saves. A single skill point costs 1 point; for 3 points, you can get +2 in a skill. An improvement in an attribute also costs 2 points. Moving up a level in cleric spellcasting costs 3 points, magic-users pay 4 points.

Racial and class effects, such as being agile or being able to memorize an additional spell, gaining press, etc. –all covered. The system does present a full page of sample kits – 20 are provided for your convenience. The system acknowledges that its results are slightly weaker than standard classes, but ostensibly make up for that by the added flexibility. Whether you consider this to be true depends – for example, you get cleric spellcasting and HD as well as the save improvements over the default rules for 6 points, leaving 4 more points for you; however, the default cleric gains levels quicker. The same can’t be said for the magic-user, whose XP-thresholds are higher, making the class-level take on the magic-user actually better in pretty much every way. This doesn’t break the game, but it’s something to be aware of. Personally, I would have actually loved to see more different, unique abilities. All in all, a solid offering I ended up enjoying more than I figured I would.

Luke Gearing also has something for us – Smother. A kind of abstract infection that subsists on noise and light, the cool tentacle-y b/w-artworks here didn’t seem to fit the text as well as I figured they’d do – we essentially have a thing that seeks to consume sound and light, only defeated by starving it. Contact can result in a whole table of debilitating effects, as its non-attacks (attempts to grab the delicious sound-sources) instill catastrophic vibrations in the targets. These are cool, but getting an idea how well it hits/ a more traditional statblock would have made the entity a bit easier to implement.

Anxious P. also has a creature for us (also provided the deliciously surreal artwork), and one I am happy to say I really love – it reminded me of one of my current favorite tracks, Selofan’s “Shadowmen” – picture the Dream troll as a grotesque thing existing in the luminal state between waking and dreaming, a painfully goofy thing eliciting at once repulsion and pity, a stalker whose reality bending powers are contingent on sight. The combat effects the creature features make it genuinely interesting, and communicating about its presence will be hard, as memory sifts away like a bad dream. Even how it’s hit and how you can force it into combat are unique – a winner of a creature, as far as I’m concerned.

As in the former installment, master Barry Blatt returns with a complex encounter/faction-set-up that has been expertly-contextualized within the framework of the Early Modern period. (Seriously, I appreciate all the tidbits, including e.g. notes that discrimination was focused on faith and not race and the like – well-researched!) This time around, the article isn’t about horror in the traditional sense, instead focusing on the more psychedelic aspects we sometimes associate with LotFP. 3 sample NPCs, a unique magic item and a whole array of suggestions on how to get the PCs involved are provided.

All right, only referees around? Great! A soldier in a London-trained band, ones James Hendricks, has managed to get his hands on one of those early 5-stringed guitars, playing with his buddies Noel Reading (viola da gamba) and Michael Mitchell (tabor) in London’s bar-scene. They are living the high life, accusations of Ranterism notwithstanding. Of course, the Puritans want them banned; Things become more complex when you take an English Catholic magic-user/musician into the fray, which includes a plot to mention a demon’s true name banned in a music instrument…and then there would be the clever Jesuit spymaster and his assassin troupe. This makes for a great “meta-quest” – you know, one that happens in between adventures, slowly building up between scenarios. Love it!

Editing and formatting are good, but not as tight as in previous issues – I noticed a couple of typos, and rules-language components also were not as precise. Layout adheres to a 1-column b/w-standard, and the pdf features quite a bunch of really nice b/w-artworks. The pdf has no bookmarks, which is a comfort-detriment. Personally, I’d suggest getting print. That being said, the front/back cover of this issue is not as hardy as the one used for the other Undercroft-‘zines, making it feel slightly cheaper.

The fourth Undercroft offers a nice array of options – I particularly liked Barry Blatt’s unique encounter/plot and Anxious P.’s creature. The class-level LotFP-engine is cool and something that the game may want to take a look at for the second edition, particularly under the premise that more things could easily be added to the material. What’s here is cool, but getting more would have had the chance to make this a true must-implement option. All in all, I did consider this one to be a tad bit weaker than the previous Undercrofts; not by much, but enough to make me round down from my final verdict of 4.5 stars.

You can get the print copy here from the Melsonian Arts Council, or, alternatively, here from Exalted Funeral!