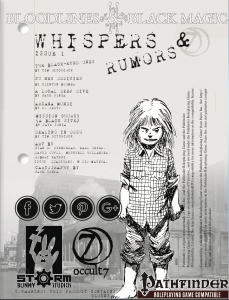 The first of the Whispers & Rumors-expansions for Bloodlines and Black Magic clocks in at 13 pages, 1 page front cover, 1 page SRD, leaving us with 11 pages of content, so let’s take a look!

We begin with the black-eyed ones, penned by Tim Hitchcock – illustrated in a pretty nice one-page b/w-artwork that depicts a girl coming from a corn field. These Small humanoids are manifestations of the powers-that-be – black-eyed entities, often looking like kids, who can strike a bargain that carries serious repercussions for breaking it. Targets slain by these beings may be returned as black-eyed zombies, and they act as emissaries to Raum. Sample lore is provided for them.

Clinton Boomer is up next and provides 20 new oddities that your character may develop, and these contain some much-needed gems – the original book offered less of them than I would have liked to see, and the ones presented here? Awesome. They include being a walking cold spot, having an abnormal metabolism, ALWAYS getting a parking ticket, being seen as belonging to the observer’s gender…and what about always being described in an utterly weird way? What about looking half as strong as you actually are? From roleplaying to minor rules-mechanics, there are some great ones here – like needing to eat stupidly spicy food, but being unable to win any food contest. Hey, that describes me! ;P What about once per day seeing dark universe, twisted variants of corporate logos? Awesome!

Next up is Jaye Sonia, who introduces us to Plymouth Falls, Wisconsin, his backdrop for Bloodlines & Black Magic – or rather, he doesn’t – instead, we get some nice advice to utilize all the oddness, local legends etc. and make Bloodlines & Black magic work for your region.

We proceed with Arcana Mundi, penned by F. Gestu, where we learn about the Seb Libri Tres and the three spells contained within – one a misfire inducing immediate action level 1 spell, the other being a 1 minute casting duration hymn hat nets long-term care benefits during the next eight hours – in Bloodlines & Black magic, that’s super helpful! Thirdly, The Secret King’s Court is a better version of rope trick that comes with the option to forget about its presence when witnessing it. The spells per se are not that special, but the nice description and lore makes them work for me in that regard.

After a creepy clown-artwork accompanied by a no less creepy child’s rhyme, Tim Hitchcock provides advice on dealing with the magical currency dosh – basically a table with critter CRs, harvest DC and two gp-columns – I assume one is the regular success, the other the  success by +5 or more – something seems to have gone wrong in layout, though – the first gp-value column’s header has moved up, looking like a header.

The final article herein, the mission church, is presented by Jaye Sonia – it’s a black site that can enhance healing, and to my pleasant surprise comes with a 1-page b/w-map. The map has no secret doors or the like, and no keys, but it does e.g. call a room “office”; I found this less of an issue here than in the regular dungeon environment, but ideally, I’d have loved to see a version without these designations as well.

Editing and formatting are good on a formal and rules-language level. Layout adheres to a nice two-column b/w-standard, with a surprising amount of nice b/w-artworks. The cartography provides is nice. The pdf has no bookmarks, but doesn’t necessarily need them at this length. A lite-version for mobile devices is included as well.

Tim Hitchcock, Clinton Boomer, F. Gestu and Jaye Sonia deliver a great little expansion for Bloodlines & Black Magic – particularly the oddities and the sample locale were fun offerings; the healing hymn spell is a nice way to speed up gameplay without requiring full-blown curative magic arrays. All in all, a cool little pdf. My final verdict will be 4.5 stars, rounded down.

If you consider my reviews to be useful, please contemplate leaving a donation or joining my patreon here.