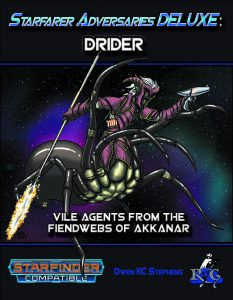 So, this supplement begins with giving us a basic rundown of drider tactics, which also introduces us to a cool notion, the FiendWebs, a kind of horrific industrial spider-themed hellscape that acts as a hub for the dread empire of Akkanar – like it!

The supplement contains two different types of gear – the shock glaives (S & E) powered weapons with the block and reach special property and scaling Arc critical effects, and Fire damage microwave pistols – the beamer pistols – iterations for levels 5, 10, 15 and 20 are provided. The pdf does explicitly state that it uses the damage values of array and CR, and not the one based on the weapon – this is in contrast to how NPCs are handled in the Alien Archive, but is no oversight here, but a conscious deviation. Whether or not you like that is a question of personal taste and will not feature in my final verdict.

The drider statblocks within range in CRs from 5 to 20, with one statblock for each of the 15 levels provided, and are aberrations with the elf subtype. Slightly odd – while the immunity to sleep is retained, the +2 racial bonus to saves against enchantment spells and effects that would usually be bestowed by an application of the elf subtype graft has been left out of the statblocks. Also odd: The elf subtype graft notes that most creatures should get Perception as a master skill, another component that the driders do not receive. In spite of being made of drow stock, driders as presented herein also lack the light blindness weakness, which struck me as odd. Personally, I think that all those things would have made the statblocks more interesting, but that may be me. While we’re on the subject of some oddities: Initiative lines in the first 3 statblocks tend to read “+X mod.” instead of the proper “+x.”

On the plus side, the benefits of the aberration graft have been consistently applied. Driders use underized weapons for their Large size, but may use 2-handed Medium-sized weapons in one hand due to their mass and legs. All driders also can smoothly and swiftly move through webbing and generate titanium ally cable-strength webbing, which they may use to have their ranged weapons behave as though they had a grappler, which is a pretty cool angle. That is, I’m pretty sure it’s supposed to be “taking an action”, not “talking an action” – funniest typo I’ve seen all day. Drider poison uses Strength as progression track, with CR 9 being the first that requires two consecutive saves to cure. Frequency remains locked as 1/round for 6 rounds, and driders have climb speed equal to land speed, with the Cr 12 one being the first with supernatural flight, courtesy of equipment.

Driders get SR of 11 + CR, have the create darkness offensive supernatural ability, and all builds use the high attack value for melee, the low one for ranged attacks. The builds do not gain multiattack, but do benefit from an array of different SPs. The damage type indicator of the bite attacks is consistently missing from all of the statblocks – probably should be P. All of the builds herein are based on each other, so don’t expect to see serious variation in the base chassis – all use the combatant array as a foundation and build from there. This is a bit of a lost chance.

Editing and formatting are good on a formal and rules-language level and the statblock integrity is high, if not perfect. Layout adheres to the series’ two-column full-color standard, with a nice artwork by Jacob Blackmon. The pdf comes fully bookmarked for your convenience, which is a nice plus.

Owen K.C. Stephens’ driders are nifty and potent – these fellows can be dangerous, but I ultimately couldn’t help but feel that they could have offered a bit more in the sense of diversity. Sure, it’s nice to get this many driders, but personally, I’d have preferred less of them and instead ones that are more different. I’d also have enjoyed a more stringent application of drow traits, but this is a matter of taste – do you picture them as more drow-y or as more strongly defined by their aberrant side?

As a whole, I consider this a solid, if not mind-blowing supplement – pretty much the definition of a solid offering, slightly on the positive side of things. My final verdict will clock in at 3.5 stars, though I don’t feel I can round up here.

You can get these driders here on OBS!

Please consider leaving a donation or supporting my patreon if you want to show your appreciation for all the time I spend on reviewing.