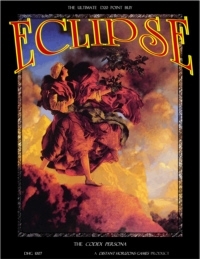 Okay, today I’ll do something different – and take a look at a free d20-supplement. This review has been requested last years and it took forever. Why? Because we’re talking Eclipse, 202 pages, 1 page front cover, 3 pages editorial, 1 page back cover, leaving us with 197 pages, so what do we get?

First of all – if you like this pdf, you can buy the print edition or pay for it here – in the fine shareware tradition, I encourage those of you who find this book interesting to do so.

So, what is this about? This book is essentially the world’s biggest character class-generator for d20-based systems. Don’t believe me that this system is massive? Well…you could conceivably play children, infant characters even with it. The system introduces CPs – character points, which are used to buy EVERYTHING – skills, feats, Hit Dice – everything can be customized via these points, of which a character receives 24 per level. How does HD work? Essentially, a character gets d4+con-mod for free – bigger HD cost progressively more CP, allowing, provided the DM allows it, up to d20 HD.

This is a running theme – the system herein offers maximum flexibility, but never tires of emphasizing that a DM should retain the final say.

Skills not on the class-skill-list start as essentially the equivalent of cross-class, becoming class skills at 6 invested CP- with 1 CP equal to 1 rank. Now relevant for PFRPG would be that class skills/cross-class skills are handled more in line with PFRPG than its 3.X predecessor here, but with a catch – the character can also buy very specialized knowledge, i.e. knowing about a specific tome, a ritual etc. – these cost CP as well and provide in-depth information on those topics. Generally, that makes for a very interesting way of handling very specialized information. Saving throws cost 3 CP per point and most specialized abilities clock in at 6 points, but could theoretically also cost more, depending on the ability in question.

BAB is increased similarly – via the slightly unfortunately named Warcraft – which is an ability that costs 6 points and nets +1 BAB. Base Caster Level works similarly and have a limit of level+3, surprisingly. This also extends to the BAB, allowing you to potentially go above the level in question. Spellcasting per level is purchased in a similar manner, with fixed costs. And yes, these include the 3.X psionic classes.

Now beyond tables upon tables, there are roleplaying modifications to CP earned – depending on the campaign you run, you could prescribe X bonus CP to be used in a specific way. On a character’s side, players may enter obligations, restrictions and the like to increase or decrease the CP gained each level. Disadvantages, much like flaws, are presented here as well. Action points are part of the deal as well, mind you, and represent just another buy-in option of specialized abilities available for CP.

Want to have a dominion, an equippage? Doable. Want to get completely rid of any class-distinctions? There you go. Point-buy casting via mana (which could be used to generate power points or spell-levels?) – in here. Return from death, villain-style? Possible. Shapeshifting? Sacrificing treasure in favor of mystic powers? Oversized combat maneuvers and weapons? Yep. Deal ability damage with attacks? Yup. Block attacks via fixed ref-DCs? Yep. This would also be one example (of many), where a particular rules-solution is inelegant and wouldn’t see use at my table – ever – non-scaling, competing throws? Not my cup of coffee and similarly, not particularly balanced design.

Metamagic, lacing of spells – the same exceedingly modular approach applies. The same goes for handling ECL+X races and race-generation – including size modifications down to cellular levels. Some existing templates are also broken down by CP-cost and channeling energy, monster abilities etc. are covered in their own chapter, allowing for quite an array of alternative options for channeling.

Now, I’ve noted the option to have a dominion – this one nets Dominion Points, which allow further options for customization and achieve with the political might. Card-themed casting, godfire, occult abilities, martial styles, ritual magic, witchcraft – all there. Have I mentioned spells from the levels 10 -23? Yes, in case these meteor showers just don’t cut it anymore.

World generation and motivations for characters would also be found herein – the system supports anything from anime-style campaigns to gritty ones and even pokémon-style gameplay. Sample character class (and PrC)-break-downs, handling different power-levels – and even checklists to make sure your now class-less character has proper motivations etc. – all of this is covered and infinitely more.

Paul Melroy and Patrick Bryant have created an interesting book for 3.X – one that can be made compatible with PFRPG, by the way, if you’re willing to do some work.

EDIT: I’ve been made aware that the system has been made Pathfinder compatible – you can find the respective information here:

Thanks to the comments that pointed this out!

Over all, Eclipse provides a superbly modular framework, essentially breaking down d20-based gaming to its base constituents in the endeavor to allow maximum flexibility. And generally, the authors have done an exceedingly fine job with it. The major problems I found were system-inherent – maximum flexibility allows for maximum options and hence also maximum fluctuation between PC power levels. While generally, the system tries hard to maintain a sense of balance, overall, eclipse is less about standard number-crunching and more about narrative-driven playing environments. “But why not go diceless or old-school in that case?” Well, perhaps you like the framework, perhaps you want some choices…or perhaps you just want general ideas on what *could* make for compelling, non-standardized options.

Now what makes Eclipse different, concise within the d20-framework? It is a system that breaks just about EVERYTHING down to CP – everything. Attacks, sneak attack, psionics, mana, runes, being a lord – everything. This is the system of ultimate possibilities and this vast array of options, some of which you probably won’t even think you desired, makes this book such a mile-stone.

For a mile-stone it is. This book, true to its name, eclipses by far other race/class generators I’ve seen and over all, remains MUCH MORE balanced than e.g. the race generation in Paizo’s ARG or just about all similar generators I’ve read so far. I still wouldn’t unanimously recommend it as a base for a campaign if your players enjoy the power-gaming/number-crunching game, unless you’re willing to do quite a lot of checking, also because some of the individual rules simply aren’t balanced (or not scaling) or rather clunky. While in no way true for the majority of content herein, I managed to break a couple of sample concepts – which is acknowledged and in line with the more narrative-driven focus of this book. So what is the grand achievement in this book? This is essentially the talented concept, taken a significant step further. Now while it’s theoretically compatible with Pathfinder, I’d contest that claim somewhat by pointing out the changed ability-suites, power-levels, skill-emphasis etc. – it *IS* compatible, yes, but it also imho requires A LOT of work and quite a few design-decisions not all DMs will be capable of making to fully break down PFRPG in CP. While the conversion on the blog are extensive, they necessarily can’t cover the entirety of material out there, so be aware of the necessity to do some conversion.

This is modular…in the highest sense. And it also is one of those books that get the juices flowing. Even if you don’t use this book, there are so many ideas for classes, archetypes, feats, magic systems etc. in here that any designer who hit a writer’s block regarding such concepts can flip open this book and get inspired – not necessarily by the individual mechanics, but by their proximity, their concepts, their general idea and general CP-cost – the same holding true for balancing more esoteric means and CP as a means of specialized knowledge is a stroke of genius idea that could easily be integrated into a given game, even without the rest of the rules – this is crunch/idea-cherry-picking at its finest – and it’s free to check out. If you like what you’re reading, support these guys.

All in all, this may not be perfect, but the book is an inspiring read nonetheless and should be checked out by anyone intrigued, even slightly, in the idea of a truly modular character-generator that gets rid of all the class-borders. As such, I will rate the inspiration, what can be drawn from this, at 5 stars. You should be aware, though, that the experience provided here is radically different from standard d20 and requires a crunch-savvy DM as well as a lot of dialogue between DM and player and should not be considered a toolkit for anyone. Personally, some of the rules-components rub me the wrong way, I’m a bit too balance-obsessed and too time-starved to break down NPCs etc. in CP, but at the same time loved the inspirations this book provided.

You can get this great tome here on OBS for FREE!

If you enjoyed it, here you can get the paid-for-version!