EZG reviews Heart of the Razor

Heart of the Razor 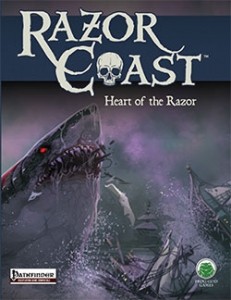 This expansion anthology of 4 adventures to enhance Razor Coast clocks in at 162 pages, 1 page front cover, 1 page editorial, 3 pages of SRD, 1 page ToC, 2 pages char-sheet, 1 page advertisement, 1 page back cover, leaving us with 152 pages of content, so let’s take a look, shall we?

This being a review of an adventure-anthology, the following contains SPOILERS. Potential players should jump to the conclusion.

First of the adventures would be Richard Pett’s “Angry Waters” for 10th level characters – which could be summed up in the words “Quest for Eldorado,” at least on a superficial level. The PCs are recruited by one dazzling lady-captain, captain Mercy and her crew – they require the PC’s assistance, since they’ve found the legendary veiled isle – unfortunately, it’s within the territory of Armada. What’s Armada, you ask? Well, if you’ve read China Miéville’s “The Scar”, you’ll have an idea – Uriah Tame, the vile lord of the place, lords over a lawless city made of vessels tethered together. Unfortunately, Tame and Mercy aren’t exactly on speaking terms. Thus, accompanying the crew on their voyage, the PCs are off to said place. Here, a rather cool mechanic takes root -the PC’s actions accrue Victory Points, which serves as a means for the DM to determine the loyalty of Mercy and her crew towards the PCs…and whether they’ll be betrayed. Neat! It should also be noted that the module offers quite an array of troubleshooting advice, should the PCs betray Mercy at given stages in the module, making it rather easy to run. But back to Armada – in order to secure passage, the PCs will have to brave the decadent, chaotic revels on Armada in a cool mini-game of skill and, potentially, combat.

Securing passage, the PCs then finally reach the isle in question…which first brings me to an issue. Armada…ought to be more detailed, Seriously, I love the concept (air elementals as spies, btw.!) and its presence in the module, but at the same time, I feel that Armada would change the power dynamics in Razor Coast as a setting, whereas it here is mostly an afterthought to the plot of this one module. So DMs using this in razor Coast probably ought to give some thought to the change of dynamics Armada’s existence poses to the power dynamics of the coast. That complaint out of the way, the island is interesting – displayed as a mini-hex-crawl (YEAH!), not only has another crew of pirates been stranded there (and make neat adversaries/allies, depending on your PC’s actions!), the island is also home to degenerate orcs sired by the local girallon populace, which makes for formidable guerilla foes. Worse, said intelligent primates are led by a deadly girallon vampire, offering the true Pett-horror in terrible traps and truly spooky environments. What about e.g. a corpse of a fallen pirate, stuck on a tree and stuffed with rotten fruit, thus attracting swarms of hornets? Yeah, shudder-worthy…in a good way.

Sooner or later, the PCs will finally reach the city of gold – beyond the gold, deadly guardians remain, as do sadistic traps (which I will not spoil) as well as some old-schoolish puzzle-like hazards. Exploration of the city will sooner or later put the PCs in a position, where they may wake an ancient evil and defeat it…also dooming the island, which proceeds to sink, while all hell breaks loose. As they are trying to escape with as much gold as possible, the PCs will reap what they have sown throughout the module and potentially have final chances to out-gambit their opposition. A rather uncommon module that shows well that Richard Pett’s talent is not limited to dark adventures – he can obviously craft old-school explorations just as well!

The second module, would be Gary McBride’s “Black Spot” – in which the PCs are once again hired for a mission, this time by one captain Riggs, who wants them to help him salvage the grounded wreck of the Flying Fortune, which is stranded on a tooth-like mountain in the middle of the sea. Once again, the journey provides ample opportunities for bonding with the crew. As soon as the PCs reach the iconic locale, though, a completely different tone begins – exploring the Flying Fortune proves to be one of the finest examples of mood-setting I’ve seen in any mystery/horror module – the slowly creeping suspicions rising, inquisitive PCs may soon deduce that something’s not right with captain Riggs. Indeed, he was the captain of the Flying Fortune and as clues accumulate, the PCs may actually find out that he’s possessed by a weird, parasitic black leech. Taking the captain prisoner, killing or saving him or falling prey to his wiles, the PCs find themselves in a nightmare most uncommon: Riggs ran afoul of the wiles of the Engineer – the vanguard of a planned neh-thalggu invasion, whose ship is hidden in the depths, just missing a few brains to launch true otherworldly death on the Razor Coast. In order to stop the aberration’s plan, the PCs will have to brave the vastly iconic and superb ship and its dread inhabitants:

From strange undead-like creatures to jade butterflies used for scrying (which are also rather deadly!) up to a heart-pounding race to escape the self-destruct of the ship upon the defeat of the dread engineer, this mystery/horror-module makes for a superb offering – even in Gary McBride’s great oeuvre, this one stands out as one superb example of adventure-crafting, including the extensive notes on possible aftermaths. Glorious indeed and both as stand-alone and as part of Razor Coast, a great module!

The third module, intended for 11th-12th level, would be Owen K.C. Stephens’ “Jungle Fever” – yes, grandmaster crunch actually took up the pen for an adventure – but how does it fare and what’s it about? It starts with a simple, yet uncommon hook – the PCs are hired by the mistress of a brothel, which has suffered from a curse/returning disease that is, of course, bad for business. But, and that is no hyperbole – your players won’t see where this module is going with that angle. Soooo…players, seriously, skip ahead… All right. What happens if isolated Tulita become desperate? They, in this case, turned to a dragon turtle as a false deity, cannibalism and worse….and no one would care. Problem is, their island harbors a special plant which amplifies the power of the dragonsmoke-drug. A Tulita survivor seeking help stumbled across a truly vile captain with this drug and she promptly set out to erect her own, no less vile and despicable colonial nightmare on the island, enslaving everyone, poisoning the dragon turtle and killing the spiritual leader of the tribe in a most gruesome manner. Now her super-drug didn’t catch universally due to limited supplies and the wanton cruelty of her men – and now, only one of her former crew remains, for the wench has reaped what she’s sown – the dread cannibalistic shaman turned the tables upon his vanquishers upon returning from the dead, making terrible disease-creature-incubators of the living and turning the island into full-blown nightmare territory. In order to stop the disease and its undead carriers, the PCs have to find the island, navigate its treacherous reefs and end the various despicable existences on the island as well as the false turtle-totem and its degenerate offspring -preferably including all the dread dragonsmoke enhancing flowers and before Pele smashes the island for the atrocities there. Seriously…wow. If I hadn’t known better, I would have assumed one of the masters of dark horror here – Owen K.C. Stephens delivers in spades here, with a module that encapsulates all the terrors of colonialism without falling into the “tulita are good”-glorification some parts of Razor Coast fall prey to. This module is dark, iconic, action-packed and full of great, unique creatures. If you’ve asked yourself why Paizo got Owen for their module-series – here’s a superb reason. I’ve always said that I’d enjoy it if Owen wrote more fluff – this one is an excellent example for that stance. Impressive indeed!

The final module, by Tom Knauss, would then be “Sinful Whisper” for 5th level characters – but can it stand up to its predecessors? The PCs are hired for a task they’re bound to hate rather soonish – escort a noble scion, a pampered (but capable!), arrogant elven woman to a taboo island where her former vessel was attacked, her fellow noble scions taken by bestial men. The thing is – the island isn’t taboo for nothing – chocked in hallucination-inducing, paranoia-enhancing spores, populated by degenerate subhuman creatures, the trip to the island not only will lead them all into dire danger, but also on a journey into the heart of the surprisingly dynamic elven maid – who may be turned towards good or evil, all by the PC’s actions – if they manage to survive the truly dastardly creatures and not lose their sanity to the plants of the place, the vile practices there or the ancient evil slumbering beneath the island’s soil, waiting patiently for its time to return to truly vile glory… This module is psychological horror paired with some truly disturbing imagery and on par with the best and most disturbing ones I’ve read for PFRPG – a good indicator that Tom Knauss should try his hand at these types of modules more often!

Editing and formatting are very good, I didn’t notice an undue amount of glitches. Layout adheres to Razor Coast’s two-column full color standard and the pdf comes with quite a few iconic, awesome original pieces of full-color artwork. The pdf comes with one bookmark per adventure, which makes navigating rather hard and in the pdf, at least the cover is a bit blurry – something absent from my hardcover copy. The maps in full color are great, though I wished they had player-friendly versions included in the map folio.

4 modules by masters of their craft – and I don’t use that lightly – and all 4 are killer. Seriously, all 4 of the modules in this book greatly enhance not only a Razor Coast campaign, but can easily stand alone. In fact, at least “Angry Waters” probably works slightly better as a stand-alone, with Armada otherwise changing the political landscape of the coast a bit too much for my tastes. The other 3 are plug-and play in the truest form, with the last one offering actually a way into Port Shaw’s elite sans rubbing shoulders with the despicable masters of the place and thus making for an all but required addition for particularly virtuous groups. Now let me say this again, loud and clear – each module herein is killer. Each one, 5 star + seal of approval material. However, the scarce bookmarks and lack of player-friendly maps make for somewhat significant detriments. Usually, I’d rate this down a whole star for these issues…but the modules don’t deserve that. They’re too good, even providing, in multiple instances, vistas that help make the Tulita less annoying one-dimensional good guys. As such, I think they should be considered required for Razor Coast. If I may offer a piece of advice for DMs: Don’t fall back quite as often on the “island-sinks”-gimmick as implied here; a given campaign should probably one employ this plot-device once and I’d suggest “Angry Waters” as the best candidate. Owen K.C. Stephens’ module doesn’t require the sinking and actually poses an interesting conundrum if the island remains…

But I’m rambling. Long story short – too good to be rated down, in spite of some comfort-detriments – 5 stars + seal of approval.

You can (And should) get these awesome modules here on OBS or here on d20pfsrd.com’s shop!

If you rather roll old-school, here the link for the S&W-version here on OBS and here on d20pfsrd.com’s shop!