Files for Everybody: Yroometjis (PF2) 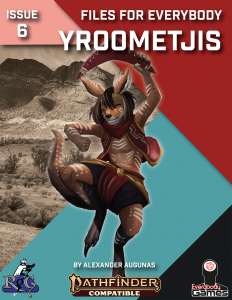 This installment of the Files for Everybody-series clocks in at 21 pages, 1 page front cover, 1 page editorial, 2 pages of SRD, 1 page of introduction, leaving us with 16 pages of content, so let’s take a look!

Before we dive in, it’s prudent to briefly talk about the introductory page, because this time around, it does matter, as it provides a brief context for the ancestry and advice on using them and clarifies an important aspect: Yroometjis all have pouches, regardless of their sex. While this may not be “realistic” in a way I’d usually favor, I wholeheartedly agree with the author that pouches are an iconic feature, and as such, a sexual dimorphism mechanic would make no real sense here. Good call!

So, yroometjis are one of the weirdo races that I’ve grown rather fond of since their initial inception in other systems: They are essentially kangaroo people, and ones that are somewhat laidback, less bookish, and in many ways simply interesting, courtesy of the author’s indisputable knack for making ancestries feel like more than just a series of mechanical benefits. Ever since e.g. the Dynastic Races Compendium for PF1, Alexander Augunas has managed to constantly make me appreciate species I was, at best, lukewarm before his treatment of them, and the details presented here regarding physical description, life cycles, etc. help contextualize these beings.

Mechanically, they are Medium, have a Speed of 25 ft., ability boosts to Charisma and Constitution, ability flaw to Intelligence, 2 starting languages + Intelligence modifier additional ones, and a pouch: The pouch can hold 1 Bulk worth of items, and transferring an item from hand to pouch or vice versa is an Interact action. One important caveat: While wearing medium or heavy armor, you cannot access the pouch…unless you take the level 1 Pouch Convenience ancestry feat that requires being trained in Crafting…which makes sense. While we’re on the subject of languages, it should be mentioned that we do get a sidebar that notes the Yroometji language as having a whole array of pronouns, so if you’re into nonbinary hymns à la “Poppy – Am I A Girl?”, you’ll certainly appreciate this tidbit of cultural lore.

This is not the only aspect regarding yroometji culture that is touched upon, though, so if you prefer to keep identity politics out of your game, you’ll still find a LOT to attach to: From the obvious cultural references regarding their oral history traditions to the notes on cuisine and their origin myths, the result of the presentation here is a well-rounded and genuinely compelling ancestry, which also includes notes on three ethnic groups. On the rules-level, no less than 10 (!!) heritages are presented: Arboreal yroometjis are Small and trained in Athletics, and climb faster (yes, takes Quick Climb into account). Riverland yroometjis are adapted to Swimming, following a similar design-paradigm as the arboreal ones.

Bushborn yroometjis can partially ignore plant-based (greater) difficult terrain, and the ability takes Woodland Stride into account. Desert yroometjis are well-adapted to the extreme heat and cold of deserts, decreasing their severity, and can withstand the fatigue incurred by starvation and thirst. Stargazers get low-light vision; striders increase their movement speed, also regarding overland travel, provided the region isn’t too rough. Stewards get one primal spell-list cantrip as an at-will option, and the cantrip chosen can be changed with a 10-minute concentration meditation. Wanderers only get one boost, but also no flaw. They get to choose one skill to be trained in, which upgrades to expert at level 5. Wayfinder yroometjis are trained in Survival (upgrade to expert at level 5), and receive know direction at will. Spirit speakers get Sylvan and guidance, and a +1 Circumstance bonus to Diplomacy checks to Make an Impression or Request stuff from nature-related entities.

The pdf contains a slew of ancestry feats: 10 that unlock at 1st level, and 3 each for 5th, 9th and 13th.  As a minor cosmetic nitpick, the intro text that states when the ancestry feats are unlocked erroneously references nashi instead of yroometjis, but that’s a cosmetic hiccup. Ancestral Markings is a feat that lets you choose from 6 actions during daily preparations, which provide minor bonuses with a 1-hour cooldown and activation actions ranging from free action to reaction. At 9th level, a follow-up feat can let you choose two per daily preparation, and 13th level lets you increase the bonus gained by them with another feat.

The level 1-feats also include options to double the cone to Seek undetected creature to 60 ft. while your hearing is unimpaired (and a bonus while creatures are in the regular range); there is an option to get imprecise sense (scent) with a 30 ft. range, a 1d6 bludgeoning unarmed kick in the brawling group, with finesse, unarmed and versatile P traits. 5th level lets you build on that with agile and deadly 1d6, as well as a critical specialization depending on the damage type you dealt with the kick. (Good catch there!)

A 5-foot Speed increase and a familiar can also be taken at 1st level. Tail Spring is interesting: It’s an action with the Concentrate and Flourish traits, and can be used when you aren’t fatigued. You Step, and then, if you make a melee Strike next, you deal +2 damage. The Lore and Weapon Familiarity options are also here, with the respective upgrade feat for the latter at 13th level, and a mastery feat at 5th level.

Hopping Gait requires Powerful leap and lets you Stride and Leap during the Stride, with how often you Leap depending on the success/failure. This one can be made more reliable with a level 9 feat, essentially eliminating the critical failure condition. 9th level also has the option to get a 2nd-level multiclass dedication feat with the druid, monk, ranger or sorcerer trait or a list of proficiency rank of expert or better in Nature. At 13th level, you can access and stow stuff in your pouch as a free action with the right feat, but only once per round.

The class options included for the yroometjis include a new druidic order (Life), which nets trained rank in Medicine, Nature’s Cure, and +1 Focus Point as well as nature’s remedy as an order spell: This is an uncommon spell that takes two actions to cast (somatic, verbal); you touch a target, choose a Medicine action and make a spell attack roll; the latter is used as your Medicine check result. Nice! The order includes a total of 10 druid feats that, unsurprisingly, focus on healing and counteracting; the options also feature a feat that makes you gain and lets you modify the resurrect ritual, and, apart from one instance where italics are missing, is presented in a neat manner. One of the feats nets you spell slots you can only use for curative spells, so you won’t *just* be healing.

The monk options include 3 feats: One for ancestral weapon synergy, one must be taken at 1st level and makes your ki primal, and nets you wild stance (minor formatting snafu here); this is btw. a Focus 1 spell that probably has one casting icon too few, or one component too many: One action for both somatic and verbal strikes me as odd. The stance nets imprecise scent and low-light vision, and monk feats with the stance trait and those with an animal’s name may be entered as part of casting the spells; the spell per se, as one with Polymorph and Transmutation traits, allows heightened versions to also provide polymorph benefits. Tight and interesting. The 4th level feat Spirit Guide Form nets you the second new spell of the same name, with crocodile, kangaroo and thylacine as options.

Beyond those, we have 3 hunter’s edges for rangers: Ambush does pretty much what it says on the tin, Menace makes you better against creatures that are afraid, and Pack Tactics enhances your options regarding Aid. The pdf includes the cool pouch ally ritual that lets you put allies in the pouch, asleep, maintaining them; success-degrees influence e.g. whether the target dreams what the yroometji sees, etc. Really interesting! The pdf also includes 7 yroometji weapons that are boomerang-inspired, with an interesting array of traits, with one being a melee weapon with the thrown 25 ft. trait. The Multistrike trait is also introduced, which lets you make two strikes, which must be made against adjacent targets, with the multiple attack penalty applied. A total of 9 different magical body paint types finish the pdf, though it should be noted that each entry features a variety of different versions for different levels. The effect include becoming incorporeal, extradimensional pouches (6 – 150 Bulk), better navigation of tight spaces, cosmetic adjustments, resistance to physical damage, size increases at the cost of being slightly clumsier (clumsy 1), anti-magic bodypaint, and options for polymorphing and infiltration.

Editing and formatting are very good on a formal and rules-language level; while I noticed a few minor hiccups, apart from one instance there was no instance that would hamper rules-integrity. Layout adheres to the series’ neat 2-column full-color standard, and the artwork by Chan Yue Rong really rocks. The pdf has no bookmarks, which is a bit of a comfort detriment. At this page-count, it’s still okay, but I still would have loved to see bookmarks.

I have a soft spot for Alexander Augunas’ yroometjis; they are one of the most unique anthro-ancestries/races/species I have come across, regardless of system, and in PF2, they feel even more yroometji than they did before; the ancestry allows for playstyles that are truly distinct, and the bang for buck ratio is excellent. Moreover, the ancestry feels cohesive and sensible in its entirety, and indeed, makes me want to see more: Their rich oral tradition almost begs for some bardic options I hope to see in the future. The pdf as a whole does no shirk away from complex operations and, as a whole, manages to present a potent array of options that allows for interesting things that no other ancestry can do, and it does that without breaking the system’s tightly-coded math. Is the pdf perfect? No, but I rather have exciting with minor imperfections over blandness sans hiccups. Thus, I’ll gladly round up from my final verdict of 4.5 stars, and also grant this my seal of approval.

You can get these cool marsupials here on OBS!

Missed the SFRPG-version? They can be found here!

You can directly support Everybody Games by joining their patreon here!

If you enjoy my reviews, please contemplate leaving a donation via paypal, or joining my patreon. Thank you.