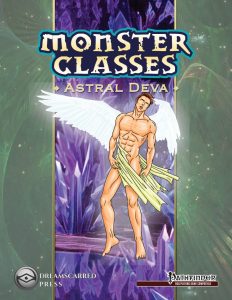 The first installment of the Monster Classes-series clocks in at 10 pages, 1 page front cover, 1 page editorial, 1 page SRD, 3/4 of a page empty space, leaving us with about 6 1/4 pages of content, so let’s take a look!

Let’s not kid ourselves here – the guidelines presented in the bestiaries aren’t really doing a good job; CR = levels doesn’t work out too well – the concept needs a finer balancing. The series acknowledges exactly this requirement. The solution here would be to employ basically racial paragon/monster classes; instead of progressing in a class, the respective critters advance to grow into the full power array. Another issue that playing monsters entails would lie within the arsenal of SPs at their beck and call – an issue that the series handles via an optional, but recommended replacement of spells instead of SPs – here, this would be bard-like, Cha-based spontaneous spellcasting drawn from the cleric list, with invisibility and see invisibility added at 2nd level.

Now, the series acknowledges that it does ignore balance in some cases to faithfully reproduce the respective creatures. No matter how you stand on this decision, the matter of fact remains that it wouldn’t have hurt to simply provide a faithful rendition AND a balanced one. That’s at least my point of view…well, so how does the Astral Deva work: These guys get +2 Str and Cha, are medium good outsiders, have normal speed, darkvision 60 ft., low-light vision, +4 to saves versus poison and their monster class has d10 HD and 6 + Int skills per level. They gain proficiency with simple and martial weapons.

Their racial class begins play at 1st level with +1 natural armor, which increases by +1 at 2nd level and every level thereafter to a maximum of +15. 1st level also nets a primary natural slam attack at 1.5 Str-mod damage that begins at 1d4 and increases to 1d6 and 1d8 at 8th and 15th level, respectively.

Astral devas also start first level with 10 + HD SR, which is very strong; most comparable options begin with 6 + HD and increase to 11 + HD at one point. 3rd level unlcoks immunity to petrification, 6th level cold and 9th level acid. 4th level nest indefinite change shape and 4th truespeech. The basic protective aura is gained at 5th level and provides +2 to AC and to saves of allies within 20 ft., increasing the bonuses to +4 at 9th level. 12th level makes the aura double as magic circle against evil and lesser globe of invulnerability. 5th level unlocks gliding wings, which are improved to 50 ft- fly speed at 10th level with good maneuverability, increasing that to 100 ft.

6th level has an issue: If an astral deva hits a foe twice with a melee attack in a round, it’s save or stun – with increasing durations. Considering how easily you can get flurries and similar tricks, that can use a further limitation in my book. 7th level nets uncanny dodge, 9th DR 5/evil that increases to 10/evil at 15th level. 10th level, the class increases base movement rate on land by +10 feet. Framework-wise, the monster class has full BAB-progression and good Will- and Ref-saves.

The class also provides attribute improvements: A total of +14 Str, + 8 Dex, +10 Con, + 8 Int, +8 Wis,, +10 Cha are gained over the level progression. That’s a total of +58 attribute points, not counting the 4 the base race provides. That translates to better than better than full BAB-progression (+7 atk + damage), + 4 Initiative and Ref-saves, +5 hit points and Fort-saves, +4 skills, +4 Will-save and +5 DC. It’s not as bad as if the deva could choose where the boosts go…but it’s still pretty bad. And no, regular attribute gains, items etc. are not included either. It’s literally almost thrice the attribute array of most games.

I don’t object to racial classes providing attribute bonuses; quite the contrary. I think racial classes should provide the like to make up for the loss of class features. The Astral Deva, as presented here, gets a lot of skills, spellcasting, better than full atk and all the abilities noted above. When used in conjunction with a 25-point buy game that has enough loot, it works; for lower point-buys, it is pretty OP, particularly when multiclassed. Less high-powered groups should certainly take care and contemplate at least prohibiting multiclassing and similar options. Which is a pity, for if you take the excessive attribute bonuses away or at least reduce them, you actually have a solid framework – from attacks to ability-gains, I don’ have a problem with anything but the minor stun hiccup and the excess employed in attribute bonuses.

The pdf also features a total of 4 feats, including Flyby Attack, the ability to sense lawbreakers, the option to gain Wing Attacks (secondary, locked behind BAB +5) or inflict +1d6 damage versus evil foes, +1d6 per 5 character levels. This bonus damage automatically overcomes DR, energy resistance and immunity. Not a fan of those, as pretty much everyone knows by now. The pdf also features a handy glossary/reference array that sums up outsider type etc. – handy indeed! There are no age, height and weight tables and the pdf offers neither traits nor favored class options, in case you were wondering.

Editing and formatting are top-notch on both a formal and rules-language level, with the one stun hiccup mentioned before. Layout adheres to Dreamscarred Press’ 2-column full-color standard and the pdf has no bookmarks, but needs none at this length. Additionally, it comes with a lite version that is more printer-friendly.

Jeffrey Swank’s Monster Classes will be a rocky ride for me, I foresee that. On one hand, the dispersal of abilities exhibited here makes me hopeful for it, since it shows concern, care and knowledge. The astral deva presented here is very solid and the spellcasting option recommended by DSP actually proved to make the class more rewarding and balanced to play than the SP-array. This, alas, on the other hand does not change that the attribute bombardment the deva receives, to ALL ability scores, which ultimately makes the option problematic and too strong. I really hoped that this would finally bring me the playable angel I wanted, considering that Rite Publishing’s In the Company of Angels, uncharacteristically for the series, provided an OP option that needs serious nerfing. Alas, the same can be said here.

I look forward to more in the series and for some of you that read this review and thought “What’s his problem? That sounds amazing for minmaxing etc.!” this may be what you wanted; very high-powered games will enjoy the astral deva here – as for myself and quite a few GMs I know, this will get nowhere near their game. My final verdict hence will clock in at 2.5 stars, rounded down to 2 for the purpose of this platform.

You can get this installment here!

You can get the whole subscription (yes, there are gems inside) here on OBS!