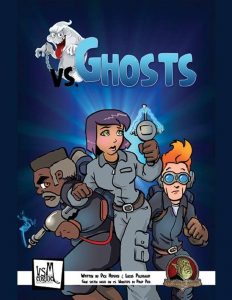 This game clocks in at 64 pages, 1 page front cover, 1 page editorial, 1 page ToC, 1 page SRD, 1 page back cover, 1 page advertisement, leaving us with 58 pages of content. It should be noted that the pages are laid out for the digest-size (A5/6’’ by 9’’), which means that, if your sight’s good enough, you can fit up to 4 of the pages on a single sheet.

So, what is vs. Ghosts? To put it simply, it’s a game hat lets you play in a Ghostbusters/Supernatural-esque scenario; whether you prefer grim realism or a fun, kid-friendly Scoobie-Doo-esque playstyle depends on your personal taste, though the often really FUNNY text herein and the comic-style artwork does emphasize the less serious takes on the tropes.

The GM (Ghostmaster) is…the GM. To play, you eed one deck of playing cards, sans Joker. Character creation is simple: A character has 5 Attributes:

Offense and Defense are used to attack/defend in physical combat. Mental is the attribute for knowledge, willpower, etc. Physical is the Attribute used for feats of strength, endurance, etc. Investigation is used for noticing clues, research, etc. You assign the following values to these attributes: 6, 4, 4, 3, 3.

You also get to choose Gimmicks: There are Good and Bad Gimmicks and you can have up to 4 good gimmicks. For each Good Gimmick, you have to take a Bad Gimmick, and when you take more than 2, you have to lower one Attribute by 1 for each additional Gimmick – I assume this refers to Good Gimmicks – otherwise, each Gimmick beyond 2 would cost 2 Attribute points, one for the Good and one for the Bad Gimmick. These include Attribute modifications and other tricks and include classics like allergies etc. on the Bad Gimmick side.

A character begins play with 10 Health, which represents how much damage you can take.

The core mechanic of the game is as follows: when performing an action, you draw a number of cards equal to your appropriate Attribute score. The highest card’s value is compared to the target value of the difficulty of the task – if you equal or exceed the target value, you succeed. Otherwise, you fail. As cards are drawn and used, they’re put into the discard pile. When no more cards can be drawn, that pile is shuffled back into the draw pile. Jacks are equal to 11, Queens 12s, Kings 13s and Aces as 14. However, low cards are better when dealing damage, so aces count as 1 there. A dice-based alternative is provided, but personally, I’d suggest sticking to cards here.

When multiple characters use teamwork to best a challenge, the highest score is used and +1 card is drawn per assisting character. Opposed actions are resolved by drawing and comparing the highest value.

Combat is divided into Turns, which are not precisely codified – they could last an hour or a few seconds, depending on your needs. Typically,a character may move and attack during his turn. Other actions, like drawing weapons etc. can freely be taken. Initiative is determined by drawing cards. Ties of the card-values are resolved via the Physical attribute, and if that still ties characters, we go clockwise. Surprise is represented as a free attack. A character can move a number of units equal to his Physical attribute. Ranged combat determines its difficulty by range. Melee attacks are resolved as a contest between Offense and Defense.

A character takes a penalty to all attributes at 50% Health and 1 Health and 0 Health equals death, unless playing with an alternate rules for death at -1 or below. If you succeed in hitting your foe, you take a look at your Offense cards: Each card that managed to surpass the target’s Defense lets you draw one new card. The value of each of these new cards is then compared to the damage cap of the target: Each card that has a value BELOW the damage cap then inflicts 1 Health damage. Character recover 1 Health for every 10 hours of uninterrupted rest. If a physician attends the character, he may also draw a card – if it’s a heart, he gains an additional Health. Situations may instill bonuses or penalties to attributes.

Equipment is gained at the start of each session: In initiative order, the players name one equipment and then draw a card: If the card drawn is equal to or exceeds the equipment’s value, the character gains the equipment; otherwise, it’s a failure. After a maximum of 4 successes (or one failure), the next player may draw. 4 successes do net a bonus card, though. Old equipment is kept. This also includes living space, transportation, etc. – just fyi. And yes, you can get less reliable vehicles, for example. Weapons come with values and damage caps, range modifiers etc. and the section also includes ghosthunting equipment like lucky totems, aura analyzers, etc….and yes, these include e.g. spirit containers.

At the end of each session, a player may remove a Bad Gimmick, improve an Attribute, add a Good Gimmick or take a bonus card from a separate deck – this card can then be substituted for one the player draws at a later time. If it’s a 2, the player can use it to add +2 to the value of a card instead.

The pdf provides simple rules for window-dressing NPCs (bystanders) and Nemesis rivals as well as simple rules for hordes of foes. Extras are NPCs that make a difference, and as such, the pdf provides some sample stats and unique Bad and Good Gimmicks. Ghosts can similarly easily be created. Fear is resolved by drawing Mental attribute number of cards and comparing them to Offense + Defense of the target (OUCH!) or the value determined by the GM. Failure imposes a -2 penalty to all Attributes for a length of time determined by the GM.

This is where we begin with the GM-section: “Dr. Corontze’s Spirit Guide” – which comes in a COMPLETELY different layout, looking like an old, weathered document – kudos for going the extra mile, aesthetics-wise. It also looks sufficiently different to keep e.g. kids from diving head-first in, looking less playful. In this section, GMs learn about the divisions of ghosts, special abilities…and there are some sample ghosts, with sketch-like drawings/stock-art/photos that actually can be a bit creepy – nice array. The pdf concludes with a selection of sample hooks to create adventures.

Editing and formatting are very good – apart from the aforementioned one hiccup, I noticed no glitches on a formal or rules-based level. The language employed is furthermore didactically sensible and makes grasping the system EASY. That’s a big plus. Layout adheres to a nice, full-color two-column standard with kid-friendly, comic-style artwork…apart from the GM-section, which becomes more creepy, though not to the point where it should become problematic for all but the most sensitive of younger readers. Pretty cool! The pdf comes fully bookmarked for your convenience.

Okay, let me come clean first: I didn’t want to review this book. Vs. Ghosts didn’t interest me. At all. I like Ghostbusters etc. well enough, but I’m not enamored with the franchise. Furthermore, it was explained to me as pretty much a nostalgia-trip. Well, I don’t do nostalgia well. Perhaps I’m too analytical or cynical for it, perhaps my excellent memory is responsible – but those nostalgic goggles…they just don’t work for me.

Well, I got the first coupon. Deleted it. The I got another. Ignored it. This went on for a while. Then I finally caved and figured I’d give it a fair shake.

Guess what? My congratulations to Rick Hershey and Lucus Palosaari – this game is actually MUCH better than I anticipated it’d be. Vs. Ghosts is no complexity monster, but it doesn’t try to be – it’s a perfect game for a longer trip, for a relatively quick session – it plays fast and rather well, can easily be modified and while it can carry real horror stories, its RAW focus on the goofier aspects makes it a real good candidate to teach folks how to play. The tactile notion of drawing cards can be fund for kids and the easy teamwork rules similarly can make the game particularly rewarding for younger audiences.

In short: This is a well-made game using cards as randomizer; it’s easy to learn and explain, the presentation is concise and makes grasping the rules super simple. The stereotypes and tropes employed don’t necessarily hit home with *me*, but that may be because I am probably as far away from the target audience as I can possibly be. In spite of that, I do consider this to be a neat, inexpensive and fun, relatively rules-lite game, well worth owning. My final verdict will clock in at 5 stars.

You can get this cool game here on OBS!