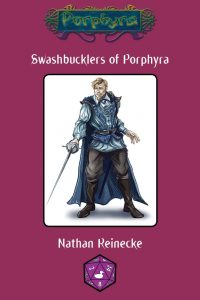 This installment of the “…of Porphyra”-series clocks in at 31 pages, 1 page front cover, 1 page editorial, 2 pages of SRD, leaving us with 27 pages of content, though, as always, they are formatted for an A5-booklet (6” by 9”) size – you can fit about 4 pages on a sheet of paper.

All right, so let’s take a look at what the swashbucklers get here! The first archetype would be the Acrobatic Swordsman, who receives a modified deed list that provides a scaling bonus to Acrobatics to move around -making the swashbuckler…you know…actually halfway competent at swashbuckling! Sure, this may eliminate menacing swordplay, but things get cooler at 3rd level, where acrobatic twist allows the swashbuckler to count as occupying the sqaure he began his turn in, allowing him to flank with himself, rewarding acrobatic tricks. Instead of superior feint, 10th level provides the option to follow a, thanks to Acrobatics avoided attack of opportunity, with an attack executed as a swift action attack. Also at 7th level, the swashbuckler may temporarily reduce an enemy’s speed when hitting them, with 15th level providing an Improved Whirlwing Attack-style, panache-powered storm of death. Charmed Life is replaced with faster movement, Nimble is more efficient (and actually relevant!) when moving and both weapon and armor mastery are properly modified to suit the archetype’s needs. This archetype represents an unmitigated win for the class. It lets the swashbuckler actually skirmish. Two thumbs up!

The second archetype would be the anatomist, who is basically a debuff machine – instead of opportune parry and riposte (which is moved to 7th level), the archetype learns the complex targeted strike mechanic, which allows for the targeting of body parts like wings, legs, etc., with scaling benefits for each of the areas targeted: Very cool btw.: You can daze etc. targets, but a truly elegant caveat prevents the ability from being cheesed. Also interesting: Panache’s regain mechanic is modified to instead pertain to enemies hampered by targeted strike. 3rd level nets sneak attack at -2 levels and 5th level replaces the critical range increase with the option to pass critical hits to allies via Butterfly Sting. And yep, another archetype that cannot be cheesed, that plays differently and has a sufficiently unique engine. In short – another winner.

The Braggart does not have panache in the traditional sense – instead, he needs to basically bluster and Bluff – if his boasting is good enough, he’ll get the panache required for that respective deed he tries to perform. While this reliably (skills are so easy to boost) delimits panache as a resource, it also eliminates the passive always-on benefits of deeds and panache-based feats, which makes the engine actually come out as pretty elegant in not only representing the concept in question, but also in balancing it. Instead of opportune parry and riposte, the character can boast of his skill, increasing temporarily his stats…though the more he wants to increase them, the higher the DC’ll be. Here, you can see, pretty well, actually, math in action: The boosts can be significant, yes – but the author has obviously done his math. Even with all item-cheesing etc., I couldn’t break this. Kudos. Big, big kudos. Yes, this archetype is all bluster; all Bluff; but even with the usual +20-cheeses via spells etc., it remains a valid option that doesn’t overstep its boundaries. The archetype may not be for every group, but I very much like the execution here.

The dandy is fighting armor and shield-less and thus gains an AC bonus governed by Charisma. The emphasis of the interplay between sharp tongue and sharp weapon is nice here: The dandy is a superb face and may use panache to increase his social skills with surge-like boosts that can even explode (i.e., if you roll a 6 on the surge’s d6, you roll again and add it!) and the archetype builds on demoralizing foes, increasing the damage output against them. At higher levels, the dandy may even expend all panache to try to avoid death by negotiating with the ole’ reaper. Nice face-type swashbuckler.

The dastard can be summed in one sentence in that the archetype represents the dirty trick specialist swashbuckler, with panache regain tied to dirty tricks. A solid engine tweak, though one that can be reliably cheesed regarding panache-regaining. Not a big fan of this guy. The honorable swordsman replaces derring-do with the option to not be moved while he at least has 1 panache and the archetype, as a whole, is basically a swashbuckler/samurai crossover – these guys can use katanas, replace charmed life with resolve, well, you get the idea. I liked this hybrid-y one more than I figured I would, courtesy of the flavor and the overall nice cultural niche this has.

Nightingales are masters of voice projection that may employ their hypnotic song instead of Stealth and Bluff – once it is gained, the two skills are immediately retrained. Basically, this is the slightly supernatural-seeming killer whose weird song clouds the mind of those nearby, the singing ninja/rogue/scoundrel. While I am not the biggest fan of the effective skill-collation the archetype performs, I found myself contemplating it still – it is a relatively simple concept from a mechanics point of view, but one that oozes flavor.

The Quixotic Swordsman is hilarious: Instead of panache, they get a nonsense pool that greatly fortifies his will…but at the same time, 2nd level’s regain mechanic is the fun part – these guys fight windmills, foes that are not there, but, on a failed save to resist this madness, they regain nonsense – RAW the only way to do so apart from resting. Not for every group or campaign, but hilarious in the right context. Finally, the scrapper may expend panache to move and use Acrobatics to potentially negate attacks, use panache to gain temporary DR…but the most interesting aspect of these guys beyond the defensive deeds would be their unarmed martial arts – yup, these guys are unarmed swashbuckler and the longer the fight is, the more he fights, the more potent his assaults become. Whether it’s the agile Eastern martial artist of a Terrence Hill-like pugilist…what could have been a basic hybrid-y archetype actually has an interesting mechanical engine and thus, playstyle.

The new feats herein contain some seriously nice options as well: Better Acrobatics for better skirmishing, for one…and then there would be an alternate representation of the concept of a weapon bin via a feat, if the integration of bind-maneuvers was something you tried to avoid. Better footwork and the classic throw at the end of movement and twisting blades? Jep, can see that. The pdf also introduces 2 new style feat-chains, with the Acrobatic Style allowing for better skirmishing and maneuverability and even the substitution of Fort- with Ref-saves while active: Since this does not wreck non-combat saves, is circumstantial and the third of the Style’s feats…I’m actually good with it. The second style introduced would be Flynn Style, which nets you bonus AoOs for parry-purposes and enhanced ripostes. This could have easily been a broken array…but the feats actually have some nice balancing tweaks – the feats provide additional options and thus, more flexibility, but deliver these powerful options at the cost of no panache-regains when employing them. Want to play a scrapper with a weapon? Well, there’s also a feat for that. Alternate better throwing into melee? Possible. There is also a 3-feat-tree that lets you use items with progressively larger shield-hands and an alternate Cha-based Mobility can similarly be found – and yes, it still requires Dodge, so it just makes what would be a feat-tax for some characters on their way to Spring Attack convey an actual benefit. Kudos!

The pdf also contains 2 new armor qualities and 4 weapon qualities. One of the armor qualities which nets basically dodging panache, erroneously refers to panache as prestige, while the other enhances Acrobatics. The weapon enhancements include increased precision damage on crits, increased mobility and there would be a quality that acts as basically a once per day deed-and panache reservoir. The pricing of these all looks solid to me. The pdf also features 3 wondrous items – the jaunty cap that helps when a swashbuckler’s stranded sans panache; the puffed shirt of the fancy man can be enchanted – and then acts as armor. Nice for the fashion-conscious noble…or infiltrations! The Swordmaster’s Flair category of items are basically defensive accessories powered by panache. One slight complaint – the slot should say “varies”, not “none” – at least when I interpret the construction requirements and pricing choice correctly.

The pdf concludes with Theon Augustus, a CR 10 dandy – all ready for your perusal.

Know what’s also cool? The pdf comes with the CR 13 Lepidoral agathion in a cool bonus-pdf…and yes, it depicts the cool rabbit-y outsider in full-color glory! Have I mentioned aura of mischief and confusing strikes? Pretty cool critter!

Editing and formatting are very good, almost top-notch: I noticed some very minor hiccups, but yeah – this is a precise book. Kudos to the editors! Layout adheres to PDG’s printer-friendly 1-column standard and the book sports some nice full-color artworks. The pdf comes fully bookmarked with nested bookmarks for your convenience.

I don’t like the swashbuckler class. I love the idea, I’m a huge fan of the classic movies…but the execution…not so much. There is a reason I’ve been looking for 3pp-options for it for quite a while. Nathan Reinecke delivers a truly impressive toolkit for the class. Not only are pretty much all options presented here valid – they eliminate some serious issues swashbucklers faced (*cough* Mobility /*cough*). The archetypes do not shy away from complex operations and, yes, innovation even! Several archetypes herein represent actual innovation. This pdf makes the swashbuckler a good skirmisher, with several options presented to emphasize different tasks. In short, apart from the dastard, I consider all archetypes herein to be shining examples of their craft. The feats allow for cool options and are well-priced regarding prerequisites; the items are similarly well-priced. In short: This shows SERIOUS care and research. Heck, it has a skill-based bonus system that cannot be cheesed to smithereens, even with the massive bonus options for skills. In short – this not only has flavor galore that does not get in the way (if the Quixotic swordsman looks too gonzo for you, reskin the guy as a traumatized/insane…and there you go), it also shows that the author engaged in serious research and did not shy away from good ole’ math. Oh, and the pdf is seriously inexpensive.

For the more than fair price-point, there is frankly nothing more I could have asked of a class-pdf like this. Considering that the few glitches I found were cosmetic, I feel more than justified in rating this 5 stars + seal of approval. This is pretty much a must-own pdf of options for anyone who wants to play a swashbuckler. My one gripe with the pdf is that I would have loved to see more reasons to stick with the swashbuckler class at the highest levels….but that, dear readers, is just me offering the most well-meant of constructive criticisms – the swashbuckler is better off for having access to this pdf.