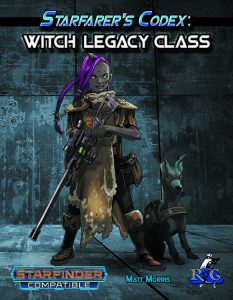 This adaption of the witch class to Starfinder clocks in at 20 pages, 1 page front cover, 1 page editorial, 1 page advertisement, 1 page SRD, leaving us with 16 pages of content, so let’s take a look!

The witch class as presented herein comes with 5 HP, 5 + Con mod Stamina and uses Intelligence as key ability score. The chassis yields ¾ BAB-progression and good Fort- and Will-saves. The class gets spontaneous spellcasting of up to 6th level, and may decipher magic text as a full action. The class gets 4 + Int skills per level, as well as proficiency in light armor, basic melee weapons, small arms and sniper weapons. The witch class uses its own spell list, which also incorporates spells from the Starfarer’s Companion tome – the class is not crippled by a lack of access to it, though.

Unsurprisingly, we get an empathic link with the first level familiar granted. At 5th level, the familiar can deliver touch spells for you; at 10th level, it can communicate with approximately familiar animals and you may talk to it in “code” – communication between familiar and witch can RAW not be deciphered. 15th level allows you to look through the familiar’s eyes, which, considering the sniping angle, can be rather nasty. Death, loss, etc. does carry no penalties apart from a grieving period. In addition to the first level familiar, the class also begins play with a patron: While within 60 ft. of the familiar, you get access to the patron’s specialized hex and spells granted by the patron, adding a decision here – scout ahead with the familiar or not? I like this.

We get a total of 14 patrons, ranging from vengeance over hyperspace to ancestors. These hexes include active and passive abilities and feature, for example, expanded class skills and and quicker tech dismantling, scaling ability to see through the dark or a nonlethal retributive pulse. Offensive abilities tend to feature a hex-caveat, i.e. that a single target can only be affected once per 24-hour interval. While this is a slight deviation from SFRPG’s default rest mechanic, I am sure that this is an intended departure to emphasize the somewhat eldritch nature of the witch – as such, I like this. Speaking of which – the rules, even when they are known to veterans from Pathfinder, do make use of e.g. fusions. This is not simply a lazy cut-copy-paste conversion.

While we’re on the subject of the class-defining hex ability: Regular, non-patron hexes, are gained at second level and every 2 levels thereafter, with Intelligence and ½ class level + 10 governing the save DC and activation action, unless otherwise noted, being a standard action. Important here: Unlike the patron hex bestowed by the patron class feature, regular hexes are not contingent of familiar proximity to use them. The hexes incorporate flight (with scaling), sharp nails, speak with animals, slowly sap away vitality – you will recognize a couple of these from PFRPG. There also is an option that lets you drain charges from nearby technological items…but as this one can already hint at, the internal balance of these hexes fluctuates quite a bit. The very powerful fortune hex makes a return, and while its limitations regarding number of times it can affect a target still remain, rolling twice and taking the higher result, i.e. the equivalent of 5e’s advantage, is VERY potent in SFRPG, compared to analogue abilities: The fortune hex is available as soon as second level and can be used infinite times per day, its limit based solely on target affected; compare that to the 2/day, self-only reroll of the star shaman’s 6th level ability, and you’ll note where I start having issues with the class.The same holds true for the debuff equivalent, twist fate. Lethargy inflicts a 30-yard (!) 1-round stagger, which is wildly better than the 6th level staggering shot exploit. Compare that with +1 to AC and saves until the target is hit or fails a save. You don’t have to be a rocket scientist to note that something, somewhere, went horribly wrong with balancing here.

And yes, we’re still among the regular hexes. 10th and 18th level unlock the more potent major and grand hexes, respectively, and these are similarly oscillating between power levels. This is before the hex amplifications granted at 5th, 9th, 11th, 17th and 19th level, which allow for the delivery of hexes via melee and metamagic-like extensions of reach. As a saving grace, these all do cost Resolve and Split hex thankfully has its own caveats to prevent splitting mightier hexes until a certain level is gained. 3rd level nets weapon specialization.

The class comes with notes for use with archetypes – for most levels, this means losing hexes, with the exception of 9th level, where a hex amplification is lost instead. Familiar skills are improved in two categories, have 1 good and two poor saves and 8 types are provided. While their base engine makes them more fragile and less hardy than e.g. drones, the ability to deliver touch spells can make them rather devastating.

Editing and formatting on a formal and rules-language level,a re top-notch. I noticed no serious hiccups in that regard. Layout adheres to Rogue genius Games’ two-column full-color standard. The full color artworks are okay. The pdf comes fully bookmarked for your convenience.

The craftsmanship of Matt Morris’ class is excellent – we can see the experience of both designer and developer here, and the presentation is crisp as well. That being said, once you start to go into the nit and grit of the class and compare it to mystic, technomancer, etc., you’ll notice that it may have overshot its target, which was rather odd to witness in such a refined book. While the technomancer’s Extend Spell is e.g. better than the comparable hex amplification, hexes have no daily limit. Considering that SFRPG, quite consciously in my book, nerfed full casters in comparison to PFRPG, I am pretty damn sure that hexes should have further costs – I’d strongly advocate in favor of Resolve Point costs as further limiting factors for at least a couple of these base hex effects. Furthermore, while quite a few of these hexes do sport a power-level that is in line with SFRPG, others vastly outclass their peers and comparable options from other classes in the amount they can be used and potency.

In a way, this supplement buckles under its PFRPG-heritage; it attempts, and rather successfully, I might add, to transport the witch to the nova age. At the same time, it stumbles in the details, with rules-similarities breeding a degree of power-oscillation that is not wholly suitable for Starfinder as the system is right now. The craftsmanship is superb, but I am very weary of the power-level the witch has; as easy way to make this class more unique and well-rounded would be to further emphasize the uncommon sniping angle and familiar, while nerfing the hexes. While the limited spell-list can, in the long run, prove to be a balancing factor, for now, I can’t rate the class on potential developments to come. I certainly hope the class will get a whack or two with the handy ole’ laser-nerf-bat to bring it more in line with the classes featured in SFRPG’s core book. My final verdict, in spite of loving a lot about this pdf, can thus not exceed 3.5 stars, rounded down.