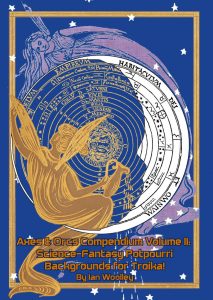 The second Axes & Orcs Compendium clocks in at 24 pages, 1 page front cover, 1 page artwork inside front cover, 2 pages of editorial, leaving us with 20 pages of content, so let’s take a look!

The back cover sports the stats for the plasmic cannon – a weapon that requires two hands to use, holds 3 charges, and ignores 2 armor; a damage table is provided, starting at 4 on a roll of 1, and escalating to 30 on a 7+, making it a very powerful weapon.

This book contains a whole new d66 table of backgrounds, Troika!’s combination of race and class, essentially doubling the available backgrounds in comparison to the core book. In many ways, Troika’s anything goes mentality, and system-inherent notion of a pretty high lethality work well in combination with this booklet, for the backgrounds herein are pretty powerful, and at times, a bit lopsided, but Troika’s system-inherent design does mean that none of these powerful backgrounds will break the game itself mechanically – particularly since the few backgrounds with a very strong slant towards one component have other potential downsides. I will note the ones I consider to be somewhat problematic. It should be noted that the pdf makes copious use of Troika’s notion of providing new advanced skills that, as a whole, tend to be self-explanatory.

I can only speak of the pdf-version of this supplement; while there was a limited edition print run of the booklet, I do not own it, and thus can’t comment on its qualities or lack thereof.

If you enjoy outrageous humor in your gaming supplements, you’ll have quite a bit of that here. Let’s take the first background, the “2.3 pounds of hallucinating pudding”; you may be a pudding; you may be hallucinating, and you have a rad, but disgusting bio-mech that looks like a normal person. Totally. You also begin with Anxiety as a possession –noting ”<This Is A Quest Item And Cannot Be Discarded Or Sold>” – which got a chuckle out of me. The second background is one of the ones that is one of the very focused and lopsided backgrounds: You can be a 1995 3/4ton pickup! Yep, a friendly compact car. You’ll have 5 Strength, 3 Drive and 2 Car Fighting…but, you know, you can’t speak. You can flash your lights and honk and stuff like that. And yes, Strength 5 may seem like overkill – until you try playing this fellow, for RAW, the communication can be…interesting! Oh, and the size, obviously… Plus, you don’t regain Stamina by resting – or eating, I assume, though that’s not specified properly; while you do come with a repair manual, but you need others to take care of maintenance. This should probably have a similar cap as healing by eating, though – as a whole, mechanically, one of my least-favorite backgrounds herein.

The book includes a Jessica Rabbit background (2D Girl in a 3D World), whose possessions include a fan-service outfit and assorted booby-traps…and you’re actually pretty darn hard to kill, like toons in the movie. There is a Teenage Mutant Ninja Turtle background (Adolescent Anthropomorphic Assassin Animal), and there is a designated background for Biker Mice from Mars!! (As an aside, these come with customization options ranging from mechanical limb with built-in fusil to half-mask with multi-function flares.) Fan of Final Fantasy VII? Lionwolf is essentially Red XIII, who comes with 4 Brooding and 3 Hair Accessory Fighting, among other things. Want to be the Discworldian oblivious, but extremely wealthy Tourist? There’s a background for that. We have two pretty potent Transformers-backgrounds (the second, Truckbot, being the one background that is imho a bit too much regarding all the benefits it enjoys – I wouldn’t allow it in my game), a Robocop background, and if you’re a fan of Dark Souls’ Sif or the great old Okami-game’s rendition of Amaterasu, you’ll appreciate the inclusion of the swordwolf background – you get 6 Wolf, 3 Greatsword Fighting, 3 Tracking, 2 Awareness, 2 Calligraphy, 2 Run – but you can’t speak people. 6 Wolf looks like much, but functionally, it ensure you’re good at being…well, wolf-y.

Beyond pop-culture references, you can find backgrounds for being an astronaut, a cosmonaut dog (!!), an arcanotech engineer, a brain-in-a-jar (complete with 2 Obscure B-Movie Trivia and 3 Underwater Basket Weaving); cat-rabbit things, watercolor-world rabbits, cabin boys (with negative grog-drinking skill)…what about ghosts of chickens? Kitchen goblins and kobold bankers? L5ers and orcs made by magical mishaps may be found alongside a Troika-version of the Nautilium. Did I mention the orc exchange student, or the fact that you can be a space rock? No, really! Cannibal space mermaids and void squids are included alongside door-to-door salespersons – and don’t confuse a businessman with a business-slime. They’re very similar, but obviously rather different – the businessman has more equipment, but the slime has a special ability. Oh, and did I mention that you can now play a disenfranchised Lady of the Lake (Formerly Watery Tart) in search of new lands to distribute swords in? Or the fact that you can play a giant flatworm? This fellow has penis sword fighting, and I’d appreciate it if the supplement actually codified the damage to be used by that.

Editing and formatting are okay on a formal level; on a rules-language level, the compendium is much more precise than the first compendium, and it’s more often consistent power-level-wise with Troika’s standard backgrounds than not – with a few exceptions that imho go too far, or could use some slightly more precise rules, as noted before. Layout adheres to a two-column b/w-standard with no frills, and the artworks seem to be using public domain artwork and collage-techniques, with colors added. The pdf-version sports a bookmark every few backgrounds, which made navigation simple. The pdf comes in two versions – one intended for 6’’ by 9’’ standards, and one for A5-kudos!

As noted before, I can’t comment on the print version, since I don’t own it.

Ian Woolley’s collection of backgrounds got several genuine chuckles out of me; the irreverent humor and Troika’s rules blend very well. The backgrounds are functional, fun, and run a pretty large gamut of cool tropes. Particularly if you’re into pop-culture-references in your game, this’ll deliver in spades. If you’re looking for more of Troika’s more focused weirdness, or for something more subdued, then this won’t scratch that itch, and might be distracting in some instances. All in all, I consider this a fun addition for Troika games that enjoy plenty of pop-culture references in their games. My final verdict will clock in at 4 stars.

You can get these backgrounds here on OBS!

There also is a print version at one point, which can be found here!

You can support the author directly here on patreon!