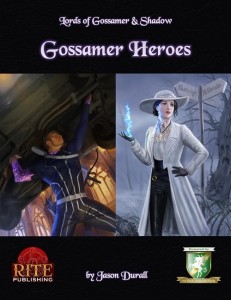 This LoGaS-supplement is 12 pages long, 1 page front cover, 1 page editorial, leaving us with 10 pages of content, so let’s take a look, shall we?

This pdf kicks off with a short introduction to the matter at hand – namely, the depiction of new player characters, readily generated at the suggestions of Kickstarter-patrons to serve as player characters. hence, by intention and to allow for a user-base as wide as possible, the characters herein have a limited breadth of powers, which should not be considered a detriment, though.

So, who do we get? First of them would be Cordelia – a kind of pirate-queen/gossamer lady studded with quite an array of different unique magical items – sword, armor, crown, etc., she is a lightning swashbuckling lady.

Grendel is a master of the umbra and believes to have potentially reincarnated into his current form, offering quite a few nice built-in roleplaying opportunities. Harrison is a totally different breed – a veteran of a war-torn world, his warwalker (a mech more than 10 ft. high) sports its very own personality to complement the monocle-wearing gentleman-pilot.

1st rank Psyche Jessamyn may be pictured as a progressive lady of a neo-victorian bent and true mistress of sorcery, bent on further improving her impressive powers -as a nice nod, she is directly tied in to the legendary Lucien.

Lowen would be something for fans of Shadowrun et al – born on a world of high techno-magical progress and teeming, never-ending sprawls, this powerful man sports a suit which renders him a superb assassin and combatant…and a crystal arm that acts as a prosthetic. Have I mentioned his mastery of eidolon?

Moreltheus is a master of umbra wholly unlike Jessamyn – devoted to eradicate all traces of his (or her? or its? It’s supposed to be a guy, but then again…all that is written may be misinformation…) former existence, this entity is god-king to his (or her…or its…) personal Hollow World of dinosaurs, reigning there as a god-king.

Natasha would be a true warrior queen and mistress of wrighting, born and raised to rule and a background of privilege, she is indulging her curiosity. Reevard would, on the other hand, be 1st rank warfare and should be considered a light-hearted trickster – including shapechanging garments and a demonic servitor side-kick.

Taltos, 1st rank endurance, would be more grim – a veteran of wars against the ghoul-king of his home realm, he saw courage and ideals fail and, after destroying the legendary foe, has taken as a mercenary to the Grand Stair. Oh, and he is allied with the Dwimmerlaik empress.

Conclusion:
Editing and formatting are good, but not as good as in most LoGaS supplements – I noticed e.g. an instance of a verb missing and similar minor glitches. Nothing game-breaking, though. Layout adheres to Rite Publishing’s two-column full-color standard for LoGaS and the supplement sports one stunning full-color artwork for each and every character herein, many of which I haven’t seen before – rather impressive. And, ladies – the female characters herein actually have PROPER armor. Kudos! The pdf comes fully bookmarked for your convenience and also with a second more printer-friendly version.

Jason Durall provides a cool array of compelling heroes herein -interesting characters that have the basic stats ready and offer enough of a blank slate to develop in multiple directions. In fact, all of the heroes herein could be developed into villains or act simply as the emergency pregen if a PC does die and the player has no time (or inclination) to build a new one. That’s perhaps the thing here – while character-death is uncommon in LoGaS (as opposed to more dice-happy RPGs), it can happen. And while LoGaS is very new-player friendly, requiring no mastery of x rule-books to get, this pdf does provide quite a benefit for new players – just hand them one character and teach them as they go – all is done, all convenient – neat pregens indeed! Add to that the built-in hooks and we get quite an interesting, diverse array. One can also see that the characters themselves are essentially commissioned, though – some just feel a tad more common and slightly less compelling to me than others – Grendel, Jessamyn and Lowen resonate with me just a tad bit more since their personalities shine a bit more through.

If you don’t want your pregens to come with too much background, this pdf will be straight 5 stars for you. If you do prefer some more hooks and pieces of information regarding the character you’ll be playing, if only to ignore (or inspire you), then you may stand before these stats wishing you’d have a tad bit more to develop. What is there can be ignored, but what isn’t can’t be rated. Hence, my final verdict will clock in at 4.5 stars, rounded down to 4 for the purpose of this platform.

You can get these cool LoGaS-pregens here on OBS and here on d20pfsrd.com’s shop!