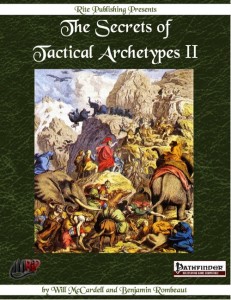 This pdf is based on V2 of the file, is 28 pages long, 1 page front cover, 1 page editorial, 1 page advertisement and 1 page SRD, leaving 24 pages of content for a new selection of complex archetypes, so let’s check them out!

After a short list of archetypes by class we immediately jump into the first new archetype, the Aetherurgist, an interesting new archetype for the oracle: The Aetherurgist gets a dual curse (one sans benefits) and the ability to speak to the voices of the (un-)dead and even summon spirits. If you’re expecting a boring “summon undead xyz”, prepare to be wowed – the archetype gains access to immobile spirits he can summon via his pool of spirit points. These spirits can ward allies, make ranged touch attacks and via 5 new revelations expand them further – e.g. make them arcanavores that can dispel magic at the cost of their evanescent existence. One of the coolest archetypes I’ve read in quite a while.

The second archetype, the Circle Witch is a neat take on the white witch – her hexes are purely supportive and may not be used offensively and she does not gain a familiar. To offset this major drawback, she can channel positive energy and select from 3 new hexes, one of which e.g. lets her transfer her ward hex to allies via god luck talismans. She is also wreathed in an aura of abjuration that enables anyone inside to use shield other on other allies in the aura as a free action spell-like ability. The archetype focuses on these communal abilities and tricks and at higher levels, she may even astral project and project herself as a kind of guarding spirit onto allies – a return, though, is only possible once she returns to the aura exhibited by her body. First I was rather baffled at the power the aura grants a party, but at the cost of a familiar and offensive hexes, I consider the overall result to be quite worth the effort – an iconic way of granting the witch class a very own identity that feels surprisingly coherent and well-conceived.

After that, we get the Elementalurgist fur the Druid-class. The druid focuses on the elemental building blocks of the universe and can choose an element every day and attune themselves and their allies via a total of 21 different attunements to an element, making e.g. their weapons count as one category larger. While the infusions are interesting and we get an additional feat and 2 spells, the archetype suffers for me personally: While the crunch is neat, I have seen too many elementalists/elemental specialists etc. to consider this particular one interesting. It could be considered a triumph that I don’t hate it.

The Wizard gets an iconic archetype indeed – the force commander: Summoning a chess-board of almost indestructible force representing the environment, foes and similar complications on the board. The battle-map features some pawns representing willing and unwilling characters and creatures and enables the commander to force movements and reposition his enemies and allies – nice take on terrain-controlled wizard.

The Grand Inquisitor is another interesting archetype – while not as complex as some other archetypes, its premise is smart: The grand inquisitors get access to their domain’s spells and may add orisons to offensive and defensive spells and while the selection is limited, it wholly changes the flavor of the class. Instead of solo-tactics and teamwork feats, the grand inquisitor gains determinations – 1/day as a free action, he may reroll an attack roll, add +4 to AC against an attack that otherwise would hit or force a foe to reroll an attack against an ally. Additionally, the grand inquisitor may add special effects to spells, one of which essentially quotes the iconic Hellfire-scene from Disney’s hunchback – ever wanted to summon the disturbing, grey faceless angels to harass your foes? Now you can add that to your spells! Smart, aptly-written variation on the inquisitor, although I consider the lack of solo-tactics to be more of an incision than the archetype needs power-wise. Better safe than sorry, though – no power-creep is always preferable to power-creep.

The Sorceror gets the Magilith-archetype – born with a powerful conflux of magic energies, the Magilith has a disruptive magical energy aura (granting bonuses to saves) and may empower or dispel spells (on a 1 or 20, respectively). Even more, they can craft their spells into weapons, granting bonuses to equipment or an ally’s checks – sacrificing spell-slots powering a lot of abilities. The balance more than makes up for the loss of a bloodline. The most iconic ability, though, is the option to craft spectral chains to cast spells on their chained allies as if touching them, absorbing them harmful spells targeted on them etc. – I LOVE THIS ARCHETYPE. It’s iconic, cool and smart.

The Fighter gets the Peltast-archetype, a light armored fighter centered on skirmishing tactics and piercing weapons as well as fining chinks in one opponents defense. Seeing the distinct lack of good light-armored fighter options, I immensely enjoyed this archetype (which also gets more skills etc.) and campaigns in the Sword & Sorcery genre will love this particular class, as there are options to get past DR when they know about an enemy’s type/weaknesses. Great class to reward smart fighters. Roy Greenhilt would be proud!

The Pious Sentinels (Cleric) are essentially divinely inspired strategists who can pray for two teamwork feats per day and even extend access to said feats to their allies temporarily via their strategic hegemony. Once again, smart class!

Paladins may now opt to become Purifiers instead: The Purifier, when using Lay on Hands, may call divine retribution on foes attacking them afterwards, sheathing them in searing, holy flames. Even better, they gain limited access to witches hexes! Now I did not see that one coming and to be honest – this is the first incarnation of the healing knight trope I actually WANT to play! Excellent job!

You may think of many things when hearing “tactics”, but not barbarian. This may change with the new Savage Tactician: The savage tactician may grant his allies a lesser form of rage and limited access to rage powers and provides a new rage power to learn as well.

Alchemists may now become Spellchymists, who may create spell vials that essentially work as infusions that may spring up on other targets/at range. While not too complex, the archetype is a cool way to make alchemists more about the team.

Umbral Weavers, a variant of the bard allows for control of visibility via mystic shadowy powers to impede foes, create illusions and dwimmerlaik-tricks, which provide ranged touch attacks or the option to entangle foes with shadows. One of the coolest abilities provides for an option to superimpose illusions of allies over them to trick foes into attacking openings that don’t truly exist. 4 new spells are part of the deal along a new feat.

Ninjas and Rogues may opt to become Vicious Opportunists now, a truly ingenious alternative: The Opportunist loses sneak attack, but gets a less damaging ability, Opportunities Aplenty, which instead works at range as well. He can also direct his allies to make use of said ability at range, which is rather neat and makes for, once again, a great strategic character. The archetype also features 8 new ninja/rogue tricks/talents and provides a lengthy and comprehensive explanation of the new signature ability and the interactions with similar abilities.

The final new archetype we are introduced to is the War Scholar for the monk gets a clever signature ability called “Rapid Planning”, in which the monk may study a given terrain to take in its features and grants a variety of bonuses to his allies – 10 options are detailed for this ability alone. Neat!

Conclusion:
Editing and formatting are very good, while I did notice some minor glitches like double full-stops and lines that should be bold and are not, but I noticed less than 5 glitches and none impeded my understanding of the content. The pdf comes with bookmarks and layout adheres to RiP’s full-color, 2-column standard. The pieces of stock-art are nice and fit the topics. All right. I’ll come out and say it, these archetypes are probably not the most simple ones imaginable. Indeed, almost all of the classes come with at least one VERY interesting, smart ability that offers new ways to help your team-mates. And that’s what gaming in a group is about, isn’t it? Scoring the deadly hits is cool, but saving all of the group from a TPK, having this tactical idea to turn the tide of battle – that’s what this pdf is about: Cooperation. And it covers all Core-classes, APG-classes – while I missed the Magus, one can’t have everything, I guess. Well. That’s about the criticism I can muster – all of these archetypes have some ability that makes them a cool, viable choice. They a smart, they often provide iconic ways of helping your fellows.

This pdf is quite frankly the best archetype-book for PFRPG I’ve read so far. While I’d detract half a star for the minor glitches, the pdf is just TOO GOOD. Authors Will McCardell and Benjamin Rombeaut have created a stellar book of smart options guaranteed to enrich your games, especially when looking for options to smart fighting. My final verdict will thus be 5 stars and the Endzeitgeist seal of approval.