EZG reviews Secrets of the Inquisitor

Secrets of the Inquisitor 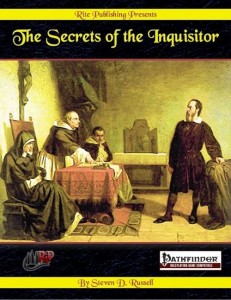 This pdf is 23 pages long, 1 page front cover, 1 page editorial, 1 page advertisement and 1 page SRD, leaving 19 pages of content for the Inquisitor, so let’s check out whether this treatment of the Inquisitor surpasses the one of the oracle!

The pdf kicks off by providing us with new archetypes for the inquisitor, all of which not only provide crunchy rules, but also in-character prose to draw one into the mindset of the respective inquisitors, which is plain awesome and enhances one’s desire to play the respective archetypes and often include potential adventure and organization hooks. The first archetype, the Heron of the Fountain, is an uncommon archetype to say the least and can be considered a stroke of genius: Running with the theme of fanaticism, being well-founded or misplaced, the first archetype is all about temperance – abstinence from alcohol and drugs and the ideals of the prohibition, including e.g. women’s rights and the ability to stand up to abusive addicts. The two sample branches provided neatly fit different foci and rules-wise, underworld-savvy, trapfinding, affliction-detecting and organization-targeting inquisitors add a whole new facet to the class – and I haven’t yet spoken about the hooks galore that the mere existence of this archetype presents and the social conundrums it represents.

The Thief-taker, on the other hand, is more straight-forward and classic archetype: Essentially a detective with access to urban tracking as well as rogue talents and the ability to trace unerringly those seeking to evade him, the archetype is less far-out in its in-game impact, but no less intriguing and well-crafted.

The Monster Hunter on the other hand does not wholly live up to the awesomeness he could have been – while the archetype enables an inquisitor to measure a monster’s power, the ability to cast find quarry and grants the ability to better kill off foes and resist their attacks, especially when directly compared to the other archetypes, this one falls somewhat flat and left me with a distinct feeling of having seen similar ideas before. An ok archetype, I guess, but nothing too innovative or exciting.

The Questioner of Trail and Tide on the other hand will have players of the Skull & Shackles AP excited, as it is essentially a hunter of pirates, marauders and the like who gets essentially the abilities you’d expect with a focus on agility and the option to measure foes, but also comes with a pool of points that enable them to temporarily stagger foes via ill omens. It is this ability that makes the archetype truly stand out and feel original, so kudos for it.

The Truth Seeker is a rather complex and exciting archetype: Gaining full BAB and a barbarian’s rage and rage powers instead of teamwork feats, this archetype also replaces solo tactics and offer the players of the class the powers to discern truth from falsehood and rage against the lying scum that dare defy the holy order they represent.
The penultimate inquisitor is a god (or rather devil’s-)send for DMs and players of Chelaxian PCs and those playing Fire Mountain Games excellent Way of the Wicked AP – the Purifiers of the burning pentagram are inquisitors devoted to Asmodeus who can torment and kill foes with hellfire, sheathe their weapons in unholy flames and even add hellfire bursts to their weapons. It should be noted that for the purpose of this class, Hellfire damage is considered half fire and half unholy damage. Now add SGG’s great hellfire magic-supplement and we’re in for awesomeness indeed.

The Channeling Martinet is another interesting archetype in that it replaces several abilities of the inquisitor with the option to channel energy. If you own the “Secrets of Divine Channeling” by RiP, you’re in for some cool massive synergy effects – purely optional, though. If you don’t own the book, the archetype still works but to fully utilize it, you’ll need the book. The artifice and war domains and their channeling effects are also part of the deal.

Inquisitors are more than archetypes, though, and thus we get 5 new inquisitions, ranging from Asmodeus’ hellfire-fueled wrath to the option to force members of a faction to submit to your will as well as the option to provide bonuses to your allies if they adhere to your vision of temperance. The Supernatural Inquisition is suitable for monster hunters and in the end, I didn’t consider any of them bad.

Then, though, we get to the true meat of the book with 36 new feats for solo-tactics- but don’t expect regular teamwork feats here! While the Inquisitor has traditionally been more associated with Western culture, there actually is a wealth of characters from Eastern mythology and literature that could be considered inquisitors. Thus, these feats are often named after lines from Sun Tzu and Zhuge Lian and offer options to play DIRTY. There is no code of conduct for the inquisitor – honor is for cavaliers, paladins and similar fools – you fight to win. And thus, these feats can provoke foes to attack allies, provide a rules-framework with “Besiege Wei to rescue Zhao” to hold enemies captive at knife-point to an all-around feint and even the option of adding a bunch of spells to you lists. Some feats grant you access to powerful spells, which are usable once per day, but not used up when the recipient succeeds his/her/its save, ensuring its usefulness. And then there are the truly smart ones, like the ability to adequately deceive hostile spellcasters by feigning affliction by e.g. charm-spells. Other examples include a feat that enables you to capitalize on your allies inflicting negative conditions on your foes, attacking the opponents and making it seem as if it hadn’t been you. And not even magic might track you: Care to give you and your allies a constant misdirection-spell?
There’s a feat for this! generally, the feats are rather specific in the circumstances in which they are useful and provide complex, intriguing stratagems for your inquisitor to use, enhancing greatly the usability of the class and making this whole section not only a good example of clever design, but also a must-have for inquisitor-players out there. Plus: Come on, what is cooler than saying “I save my ally via Slough Off the Cicada’s Golden Shell!” (By the way: Once per day, save a dying ally by negating damage and placing an illusion of his death in place – neato!) However, while the feats come with some massive restrictions and some hefty prerequisites, you should be aware that they are advanced, anything but simple and, in the right circumstance, have the potential to turn the tide of battle. Smart fighting is a must when using these and while they might seem strong at first, closer lecture always shows how/why they are balanced the way they are. Seeing how Solo Tactics has been mostly neglected by other pdfs on the inquisitor, this particular chapter is just awesome. It should also be noted that SGG’s War Master an also easily utilize these new feats by changing out Solo Tactics for Individual Tactics.

The final page of the pdf provides us with 11 new judgments ranging from dimensionally anchoring foes hit, gaining DR against non-lethal attacks and even the ability to keep his allies up to his status via warning signs. Again, cool judgments, nice ideas, nothing to complain about.

Conclusion:
Editing and formatting of V.3.0 are very good, I didn’t notice any significant glitches that impeded my enjoyment of the pdf. Layout adheres to RiP’s two-column standard and the pdf comes fully bookmarked. Artworks are mostly fitting stock and b/w. All right, I’ll come out and say it: If you like the inquisitor and want to amplify the amount of available options for your favorite fanatic, there’s simply no way around this pdf. It is vastly superior to the rather bad “Secrets of the Oracle” and in fact replaces Open Design’s Divine Favor-pdf on the inquisitor as my favorite supplement for the class. The archetypes are mostly smart and extremely iconic, the inquisitions and judgments are nice and the solo-tactic-feats are STELLAR and exciting.

The pdf redefines the up until now rather narrow confines of the class and expands its scope and options in a way that is only rarely seen in any class-supplement. While not all archetypes hit my sweet spot and some of their abilities have been done before, most have something innovative going for them and while some of the feats may seem powerful, their restrictions make this additional power justified. All in all, this is a very good sourcebook that once again provides a great example on Steven D. Russell’s ability to write excellent and iconic crunch (and fluff). My final verdict will be 5 stars + seal of approval.