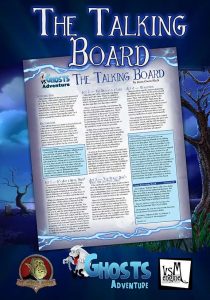 First things first – this becomes much cooler with a prop: Get an Ouija board – the module assumes that a character has gotten one and focuses on trying it out. The board in question was in the possession of one Hason Schmidt, a little-known Pittsburghian spiritualist. At first, the communication via the board will deal with Hason…then, the responses become rushed, as the dark spirit Zozo (full stats provided) starts taking over….and sooner or later, Hason will spell “HELP” as the lights go out.

While they turn back on, temperature has dropped and Zozo has taken over. Screwing with the investigators, unleashing ghost orbs, angry shadows (with modified abilities)…and at one point, Zozo will attempt to dominate a character. While the specific means of destroying the evil spirit are presented, the pdf is silent on how the PCs are supposed to deduce the steps, which serves as a minor hiccup in the set-up.

Jason Owen Black’s Vs. Ghosts-adventure is pretty fun – and if you have a Ouija board and use it, you can make it really horrific. The premise is simplistic and not too grand, but a prop makes it really shine. You can run this for kids and adults alike by emphasizing certain aspects, though as written, it probably is the creepiest Vs. Ghost module – squeamish kids may be a bit frightened here. The tweaks on foes are interesting and, as a whole, this can be a rather nice adventure, particularly if you have a Ouija board. My final verdict for this one is 3.5 stars – though ghostmasters who believe themselves to be capable of doing a Oujia-séance and integrate it in the module should add a star – as noted, that adds a whole level of atmosphere to the game, particularly if you can rig the light to go out… And yes, rounded up due to in dubio pro reo.

You can get this nice mini-module here on OBS!