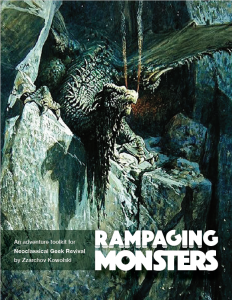 So, as we’ve come to expect by Zzarchov Kowolski’s books, this one sports a rather neat and dry sense of humor, evident from the introduction onwards – sometimes, you don’t have the time to prepare a new plot, right? You’ll need filler, because “that Golden Girls marathon doesn’t watch itself”, to paraphrase the supplement. Well, the solution this booklet proposes is to generate a rampaging monster that scours the countryside!

The generator provided here indeed allows you to generate a creature, depending on your speed and familiarity with Neoclassical Geek Revival (NGR)-rules, in less than 5 minutes, so the convenience angle is definitely fulfilled – you could, in theory, do this behind the screen while the PCs are shopping, for example. Now, an important note here: Unlike many offerings by the author, this is NOT a dual-statted NGR/OSR-product – we have only Neoclassical Geek Revival support here and thus this does not translate too well to e.g. S&W or LL since NGR (which you should check out!) is pretty far away from standard OSR-rules.

All righty, that out of the way, how do we proceed? Well, first, we think about the monster’s size in relation to humans and then, we take a look at attributes – 6 values are provided, allowing you to quickly and easily generate scores with descriptors – very dexterous monsters would have Agility (A) 16, very clumsy ones instead Agility 7 – simple, quick, convenient. If in doubt, you revert to rolling 3d6. Now, in the new version, these pieces of information are clearly assigned mini-tables, and they employ one-letter abbreviations – this is made possible due to some rules-nomenclature changes of the system in its latest iteration. Then, you determine how a monster behaves and assign pies to the monster as though it was an NPC. Does it stalk its prey? Rogue. Bruiser? Fighter. Does it spread plague? Priest. You get the idea. While not all abilities may seem like they seamlessly apply, the pdf provides a bit of guidance there. The new iteration also provides a suggestion for when pie pieces of fool would make sense.

Here, the pdf becomes actually valuable beyond convenience for the GM – for next up, we get combat tricks…and if you recall my review of NGR, you should know how much I like the modular combat and its tactical depth…in spite of how easy to grasp and run it is. Size 8 monsters may e.g. damage foes by jumping up and down; shaking vigorously can cost grappled targets their actions, etc. – while these may not look like much, they can actually be employed in rather cool ways. If you’re like me and absolutely ADORED “Shadow of the Colossus” back in the PS2-era, you may be smiling right now – yep, the content herein does allow you to create such scenes…though, this being NGR, they will be much deadlier than in SoC…but the cheers will be louder. Believe me. Snatch attacks, knock-down assault with wings…pretty cool. This design-paradigm also extends to innate monster spells, which translate just as seamlessly to NGR. The examples cover the cool basics – breathing fire. Breathing exploding balls of fire…and LAZER-EYES[sic!]. Yes, this is a misspelling in the pdf. Yes, it made me cringe. Still, laser-eyes? Heck yes! Here, we can also see some system-changes: Breathing explosive balls of fire, for example, now either affects areas or Long Missile Range, and the innate spells of monsters no longer have a complexity rating, which makes sense to me.

Anyways, so now we have a monster…but why does it rampage? Motivation is up next – 6 basic ones, ranging from hunger to greed and malice, add at least a little bit of depth to the critter created.

Need a hamlet to destroy? Roll a d12 and a d8 and compare it with a table of 24 entries – 12 for the first part and 12 for the second part of the name. The position of the dice denote which one you’ll use for the first part and which for the second. These names will also hint at the peculiarities of the place – hamlets named “Carp-something” will e.g. sport ponds etc. Now, the new version has the two columns more cleanly laid out, so that’s a plus.

The pdf sports 4 sample rewards for slaying the critter.

Finally, if you absolutely have 0 time left, a sample giant, a big statue, a wyrm and a T-rex are provided, should you need a monster to drop immediately. The presentation of these monster stats imho really benefits from the new presentation: It’s clearer, using bolding and smart structure to make reading the statblocks swifter. Obviously, the stats have been revised and adjusted to reflect the new version of the game as well. However, in the new version, we get more: A wyvern, a giant skull floating in a pool of ectoplasms, a giant spider and a cockatrice complement this section now, doubling the sample monsters featured.

Editing and formatting are good – I noticed no glaring issues in the rules and only minor typos. Layout adheres to a nice, printer-friendly two-column b/w-standard. The pdf use fitting b/w-artwork, but is mostly text – the pdf’s new layout is much cleaner and makes the pdf easier to read. Information is compartmentalized better, and the overall impression is one of a more professional file. Utterly puzzling: In stark contrast to the previous version of the file, this one has no bookmarks, making navigation slightly harder.

Zzarchov Kowolski’s little toolkit is still helpful, fun and easy to use; in particular the combat tricks and monster abilities, both mundane and magical, made me smile from ear to ear. The generator does what it’s intended to do…and yet, it made me realize how much I would have liked a full-blown monster-expansion book for NGR. The tricks and abilities presented are cool and fun and made me crave more…to the point, where I almost lost sight of what this tries to be and what it doesn’t try to be. This is not a big monster-enhancer toolbox for NGR – it is a generator for the time-starved referee caught unprepared…and though I very much would have loved to see a big monster book, and though this made me CRAVE more, it would not be fair to rate this generator according to a premise which it never intended to fulfill. As a generator for monsters ravaging the country-side, this does a great job – not a perfect one (it is hampered a bit by its economical size and the corresponding loss of depth that it could have had), but yeah. Now, while it *looks* like the revised version is shorter, that’s not the case – the new presentation is just tighter, and we actually get more content! While I’d usually contemplate upgrading my final verdict, the loss of bookmarks in the revised edition does partially mitigate the benefits of the streamlined layout and additional content. Thus, this remains a neat book for NGR-referees that is well worth a final verdict of 4.5 stars, rounded up due to in dubio pro reo.

You can get this revised edition here on OBS!