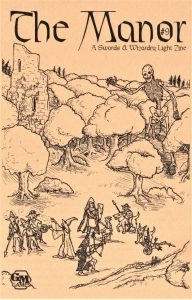 The 9th installment of the Manor-‘zine clocks in at 28 pages, 1 page front cover, 1 page inside of front cover, 1 page editorial, 1 page back cover, leaving us with 24 pages of content, laid out in 6’’ by 9’’ (A5), which means you could theoretically fit up o 4 pages on a given sheet of paper when printing this ‘zine.

Now, first things first: Unlike previous iterations of the ‘zine, this one assumed the Swords & Wizardry Light (SWL) rules set as the default OSR-rules-set employed. As always, conversion to other old-school systems remains relatively simple. Upgrades to Swords & Wizardry Continual Light (SWCL) are simple enough, but are not done for you – you’ll have to extend the level-range by hand beyond 3rd.

After an introductory page, we get something I applaud: Actual gods for the clerics featured in the minimalistic rules of the SWCL –and each of the gods noted here are defined by basically a tweak on the cleric base class, differentiating between the adherents of different gods. I wholeheartedly welcome this notion, and 4 such gods and associated cleric variants are provided, the first of whom would be the exemplar, devoted to the War God Sarranth. Exemplars get linear HD progression (1 per level) until third level. Saves start at 14 and improve by one every level, and in a helpful manner (if you want to upgrade to SWCL), BHB is noted to improve at first and 4th level. (SWL only goes up to 3rd level). The exemplars have no armor or weapon restrictions and favor spears. They get +2 to saves versus death and poisons and gain a first level spell slot at 1st level. Taking cure wounds I nets the inverse as well. Their turn ability inflicts 1d3/class level against undead instead of the usual benefit and beginning equipment is noted.

The clerics of Delaquain are called Lions, and their base chassis is identical to the Exemplars, save that they may choose a 1st level spell at 1st level to choose from either cleric or magic-user list and they get normal turning. Curates, the cleric of Lavinia, a goddess of healing, have the same HD and save-progression, but only get a BHB at 3rd level, which makes extrapolating higher level BHB gains a tad bit harder when upgrading to SWCL. They are restricted to leather armor and daggers and staves, get the same save bonus vs. death and poisons, and they get a 1st level spell slot at 1st level and “additional Cure Wounds I” – the verbiage could be a tad bit clearer here. Their turning paralyzes undead, but requires maintenance each round, which is a nice compromise and preferable to the oftentimes annoying fleeing. The clerics of Possimium, a god of nocturnal creatures, share the chassis of the Curates, and are known as Parsons. They share the rules chassis of Curates, but have no armor restrictions, are limited to blunt weapons and get the 1st level spell slot as well as access to the charm person spell. They turn undead normally.

As a whole, I found myself enjoying these cleric kits/specializations. They offer solid tweaks on the class, and, while rules-verbiage isn’t always perfect, add some much needed flavor to SWL-clerics without unduly complicating the simplicity of the system.

The next page provides 6 different monster traits that cover classic abilities for SWL monsters – these include burrowing, being diseased, a concisely defined drain ability, pack mentality, etc. A 3d6 random encounters section is helpful, though it should be noted that monster damage does increase beyond SWL’s confines – the hill giant, for example, inflicts 2d6. This is analogue to SWCL, but, deepening on what you’re looking for, is something to bear in mind. Nice: The random encounters are not simply lists of critters – each one has a bit of lore and a small description to contextualize it. Treasure, if any, is noted.

The next chapter provides the Crooked Man, which would be something cool: A semi-legal dungeon-tavern that sometimes is open, sometimes isn’t – it can be slotted painlessly into even mega-dungeon campaigns and sports notes on determining randomly the beverages available. The tavern also comes with a nice b/w-full-page map that is player-friendly! Big kudos! The write-up also includes three fully statted NPCs, all of whom receive their own, nice b/w-artworks. The pdf concludes with explaining the concepts of hard silver and death coins.

Editing and formatting are pretty good – not perfect, but better than in some installments. Layout adheres to a no-frills b/w-1-column standard and the pdf sports surprisingly nice b/w-artworks. The b/w-cartography similarly is pretty neat – doubly so since you can easily use the map as a handout. Kudos indeed! Alas, the ‘zine does not have any bookmarks, which constitutes a comfort detriment.

Tim Shorts’ ninth installment of The Manor benefits from using SWL/SWCL as the rules-set. It’s obvious that the author likes and enjoys the system, and similarly, the rules are tighter than they sometimes were in the past. While a few deviations from strict conventions and the like exist, this inexpensive ‘zine does offer some fun options for fans of the stripped-down, rules-lite iteration of Swords & Wizardry. Now, it doesn’t necessarily reinvent the wheel, but it is a fun and handy offering. As such, my final verdict will clock in at 4 stars.