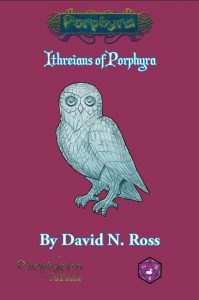 This installment of the „…of Porphyra“-series clocks in at 35 pages of content, 1 page front cover, 1 page editorial, 2 pages of SRD, leaving us with 31 pages of content. These pages have been laid out in 6’’ by 9’’ (A5), which means you can fit up to 4 pages on a given sheet of paper if you print this out.

All right, so we begin this supplement with a deity write-up of Ithreia, also known as “Old Mother Owl” or as the “Queen of the Blinding Wind” – a deity of birds, sea and winter. The deity is Lawful neutral, with 4 domains and subdomains and the pilum as favored weapon. The write-up goes above what you’d expect – it also features an obedience and evangelist, exalted and sentinel boons – the second of the evangelist boons is particularly cool: It lets you tread through difficult terrain, and allies may follow in your footsteps, but only for a round! The boons, as a whole, are intriguing indeed.

As a deity associated with the elements, Ithreia is particularly loathed by the elemental lords, and her legend, realm and divine relations are explained in well-written detail, making full use of Porphyra’s unique cosmology. The write-up also sports notes on her holy texts and holdings and even features cool (get it, because ice….Ouch. Yeah, 2 cents into the bad pun jar…) aphorisms and a fully depicted spell preparation ritual. 2 meaningful and well-written religion traits are included as well, and worshipers of Ithreia can call different creatures – these minor spellcasting option changes add some nice details to the write-up. The pdf also notes divine servants. So far, so amazing!

Now, as far as class options are concerned, we get a variant of the less than impressive Accursed class that exchanged positive/negative energy resistance with cold resistance. (Boring.) The icebreaker is an archetype of the armjack hybrid class, who replaces bardic knowledge with +1/2 class level to Swim, Acrobatics, Survival, Climb profession (sailor) and Knowledge (religion) pertaining to Ithreia. Instead of versed with armor, we get Endurance and scaling cold resistance. At 6th level, the archetype can endure elements via cry to arms. The way in which the duration works here requires a bit of close reading – this could be slightly tighter. At 19th level, the archetype gains the option to use cry to arms to shatter ice/crystalline surfaces.

The pdf also sports quite a few different bardic masterpieces, with Blizzard’s Lament netting you an aura that staggers and blinds nearby targets with a save to negate. There is also one for blindsesne and one that nets allies within 30 ft. +10 (!!!) to initiative. And yes, 5th level bard spell known is hardcore, but considering how rocket launcher-tag-like high level PFRPG gaming can be, this will get nowhere near my game. A crazy prepared effect is also nice, particularly since it actually manages to be uncheesable! Huge kudos there! Fortifying targets versus cold and bleeding at the cost of initiative, Perception and susceptibility versus sleep also is interesting.

The order of the owl for the chronicler (see Prestige Archetypes) replaces well-versed with Endurance. The archetype also replaces mass suggestion with the option to call an Ithreian 11th level cleric. (And yes, statblocks are provided!) via the capstone. The druid archetype Eye of Old Mother Owl replaces nature sense with +2 to Perception and Sense Motive and is locked into a couple of choices regarding animal companions taken via nature’s bond. At 4th level, the archetype gets to cast divination spells while wild shape’d, and retain concentration on them as a move action while in wild shape. Additionally, sense fear and discern lies may be spontaneously cast and discern lies is added to the class list. This replaces resist nature’s lure. Instead of venom immunity, Perception-penalties due to distance are quartered and the druid increases range and area of divinations cast by 50%.

The hermit hybrid class gets a new illumination: +4 to Stealth and Survival in snow, and immunity to cold of up to -50°F and winds of less than hurricane force. The illumination also nets commune with birdsas the spell, may look through the eyes of a bird in long range (what happens with regular sight?), and at 8th level, the hermit knows when population is dangerously depleted or groups are ailing, as if she asked via commune with nature. Okay, does this require concentration? An action? Is it instantaneous? No idea.

The keener hybrid class gets two laments: One that knocks prone a target and moves it, one that allows targets healed to stand up as a swift action or move 5 ft., even through difficult terrain, sans AoOs. Does the latter count as a 5 ft. step or not?

We also get new kineticist wild talents: Sheltering Snow is a utility wild talent, which lets you make walls of ice and tiny hut, with 1 Burn cost to make it last longer. Squall infusion can be applied to cold blasts and has no burn cost: It dazzles the target on a failed save, regardless if the target was damaged or not. Witheout is another substance infusion is cool: It makes your kinetic blast, the squares it moves through and area of effect provide concealment; at 2 burn cost, this is feasible.

The gyrfalcon of the blinding wind paladin must choose a mount, which must be a roc. Instead of spellcasting, the paladin gets to forage potions, which is damn cool – particularly since this class feature may not be cheesed – only a limited amount may be maintained, and the scaling is sensible. The aura of justice is replaced with…+10 to initiative, +4 for nearby allies. OP as all hell. Kill it with fire. The paladins of Ithreia may remove penalties to ability scores (NOT damage or drain!) with a mercy and fortify allies with a bonus to Fort saves and temporary hit points.

The cool quartermaster class gets the pack tinkerer archetype, who receives Ride as a class skill instead of Linguistics. The archetype gets a cavalier’s mount and may apply inspection only to it. Similarly, trap evasion only applies to it. Unique and cool: Instead of repurpose mechanism, the archetype can teach his animal to activate, ready or deploy items! Love this little engine tweak. The singing Guide ranger must chooses companions as bond and may share ½ favored terrain bonuses and Endurance with allies. The archetype never falls as a result of a botched Climb checks, never falls prone on ice or due to a vessel’s movement. 11th level nets a blindsense granting song that upgrades at higher levels and replaces quarry. There is a share sense based shaman hex with scaling range and we get two shifter aspects: The gyrfalcon one is based on the falcon and replaces the minor form benefit with scaling Fly-bonuses. The Whale aspect does pretty much what you’d expect: Minor form is analogue to the hunter aspect, major provides whale-associated tricks. Nothing spectacular. Finally, storm rider skalds replaces song of strength, dirge of doom and song of the fallen with custom raging songs: The base one if a cold blast; group flight and swimming and storm control make these nice. Well-versed and versatile performance are exchanged for counting as larger for withstanding winds and scaling cold resistance.

The pdf also includes a total of 10 spells that focus on Ithreia’s strong leitmotifs: The cold spells here are nice and do more than just damage, and having a spell that interacts with bardic performance in place is interesting: It nets you early flight as a level 2 spell, but requires maintenance of bardic performance and thus wrecks Stealth. It may also be discharged to reroll an attack roll, which is an interesting tactical angle. Using a spell to prepare a domain/subdomain spell (prepared casters only) is also intriguing. Particularly impressive here would be the spell that manages to preserve other spells – the rules-language here is impressive indeed and it is not cheesable! I really liked this spell section.

The magic item section provides a custom blue bag of chosen tricks, basically the ithreian version of the classic item, as well as three new figurines of wondrous power: opal gyrfalcon, pearl owl and sapphire whale.These are more potent in the hands of Ithreians, which is something I enjoy and a notion I’d very much love to see more of in the final version of the Porphyra RPG, but that as an aside. A glass to see through snow and ice is here, and what really made me smile: Remember that preserve spell trick I mentioned? Well, ithreians get an item class that are LITERALLY spells in preservation jars. Great meta-commentary and a way to make them, well, fun!

We end the pdf with a CR orcam armjack icebreaker and a CR 10 harpy cleric.

Editing and formatting are very good on both a formal and rules-language level. Layout adheres to Purple Duck games’ no-frills 1-column standard with purple highlights and the pdf sports a few really nice full-color artworks. The pdf comes with EXCESSIVE bookmarks, making navigation both easy and comfortable.

David N. Ross is a very precise designer; he has created quite a few of my favorite class options and tricks out there, from covenant magic to his illuminates and shadow weaver, there are several neat examples of what he’s capable of. This depiction of the followers of a deity is admirable in the best of ways: Ithreia and her followers come to life in this little pdf: The class options breathe the leitmotifs of their patron deity and establish a sense of cohesion and consistency I love to see. I hope that faiths and how they are presented by Purple Duck Games in the future will adhere to similar principles. Beyond the flavor, the pdf manages to provide quite a bunch of complex rules-operations within its surprisingly extensive collection of engine-tweak archetypes and class options. Now, there are a few instances where the rules are slightly less tight, but that wouldn’t irk me. I’m flabbergasted, though, by the ignorance pertaining the gross power of initiative boosts this has. The massive initiative boosts a few options herein grant are ridiculously potent in the right hands and should be purged with extreme prejudice, marring an otherwise compelling and flavorful tome.

That being said, these components are easy to nerf and should not dissuade you from checking this out. My final verdict will clock in at 4.5 stars, but I’m afraid I can’t round up for it.

Missed the cool quartermaster? You can find the class here!

The Hermit class can be found here!

The Armjack class can be found here!

The Keener class can be found here!

The Prestige Archetypes compilation can be found here!