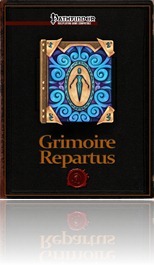 This installment of Dreadfox Games‘ Grimoire-series is 33 pages long, 1 page front cover, 1 page editorial, 1 page SRD, leaving us with 30 pages of content, so let’s check out their take on abjuration-spells!

After about 7 pages of spell-lists by character-classes, we delve into the respective spells, kicking of with the Aegis of Energy-spell, which adds temporary hit points to curing effects via positive or negative energy effects. The very second spell this pdf offers, Aerial Mantle, makes AoOs automatically miss the target and depending on the strength of the wind surrounding the target, have their attacks rebounded on them with a bonus depending on wind strength. Druids get an significantly-enhanced spell duration, which is nice. What isn’t nice at all is that the spell is essentially ruined by the fact that it does not specify whether it needs aforementioned, at least “strong” winds, to work at all or whether it conjures the storm winds up as a partial effect of the casting. In the end, we don’t know and in my humble opinion, such a limiting factor would be necessary, since without it an auto-miss for ALL AoOs is overpowered. Rather interesting and cool is Arcane Gravity: A spell that lets you temporarily seal whole spell-levels off: If you chose to e.g. seal of level 3, you can’t cast level 1, 2 or 3 spells. As a trade-off, your effective HD for purposes of spells like cloudkill etc., is increased by the value of the highest spell-level you chose to seal off. VERY cool!

Not so cool: Axis of Resistance: The subject’s SR is increased by +2 for every source of SR he/she/it has in excess of 1. Stacking SR via a spell, even if it is such a minor stacking, is a design-decision I can’t really get behind. While probably at the top-most a bonus of +6 or 8 will be achieved, it’s a typical powergaming-enhancing type of design. Corpus Examinus is a witch-spell of unique iconicity and ranks among the best I’ve seen in a while: It allows you to painlessly sever parts of your body to control them as separated entities with Hp you determine, abilities depending on the body part you chose to extract. A table e.g. lists options to use evil eye via extracted eyes etc. Better yet: The options of regeneration etc. and the interaction with the spell are taken into account. Unfortunately, there are also problematic spells: The cantrip (elven) sobriety eliminates the effects of alcohol. I’ve seen that one before, in Rite Publishing’s 101 0-level spells, and I already hated the idea there – an end of the hangover plots, of drinking contests and a major detriment to grittiness and the results of alcohol consumption. Violent drunken guy heading your way? Just cantrip him! An ok idea with problematic repercussions for a campaign-world’s internal logic.

Field of Disintegration, on the other hand, is rather smart: You conjure a field that is very detrimental towards weapons that hit it, resulting in a lot of broken weapons and damage for those employing natural weapons – but before you start screaming unbalanced: With some sharpening after combat, the negative effects of this spell can actually be negated, which is rather neat! Hand of Rescue would be another winner: Reducing the weight of the target creature, it even allows you to potentially throw the respective character a short distance, acting as a crunchy representation of the iconic rescuing catch of an almost-plunging-to-death-comrade. Luminore’s Refractive Shell would be another interesting spell that eliminates invisibility and blurring effects in a small area, but cannot be used offensively – interesting, clever, neat! There also are two rather nice spells that allow you to create a reservoir of positive or negative energy respectively, acting as a kind of limited battery of the energy by foregoing healing by the energy. Repel Malignancy makes for yet another interesting idea, creating an impassable barrier that cannot be crossed by anyone who uttered any negative word to you in the last 24 hours, even if the words were meant as a form of criticism. There is also an interesting ritual herein, like the antipaladin’s royal impunity, which sacrifices a virgin over 12 hours and sells one’s soul to a fiend, but grants immunity to infernal powers exerted by non-noble fiends.

Two spells also are interesting in that their respective powers are tied to the time of the day, which is interesting, even though it requires some tracking on the player’s part. There also are spells in here to suppress magical traps temporarily and a smart capstone level 9 druid-spell that makes one transmutation film essentially impossible to dispel, but inflicting damage on you if the spell in question would otherwise be dispelled. Speaking of cool interaction with transmutation: There’s also a spell that potentially adds harmless transmutation effects to other creatures beyond the primary target.

Editing and formatting are top-notch, I didn’t notice any significant glitches. layout adheres to Dreadfox Games’ two-column standard with its thorny borders and parchment-style background. There are no artworks herein, but the pdf is extensively bookmarked.

This collection of abjuration spells is interesting once again – displaying DFG’s creativity with far-out spell concepts, the content herein is often bold in mechanics and imaginative in design. Not always, though: Some spells, as with many of the Grimoire-books, are variations of already existing ones. And in others, creativity backfires and can potentially create logic bugs in your setting – handling these with care is of tantamount importance. That being said, the majority of the content herein is interesting and should enrich a spellcaster’s arsenal or a DM’s creative arsenal to use and spin tales from. While not reaching the peak of genius of Grimoire Mutamateria or Grimoire Illusionatus, this pdf is actually one of the better installments of the series. Thus, I’ll remain with a final verdict of 4 stars and a recommendation to everyone who is looking for some truly different abjurations.

Grimoire Repartus is available from: