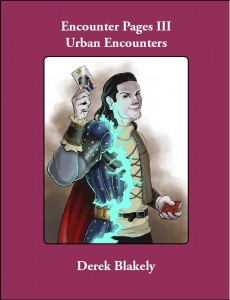 This installment of the Encounter Pages-series has somehow fallen through the virtual cracks of my HD – so let’s finally get this review started! The pdf clocks in at 23 pages, 1 page front cover, 1 page editorial/ToC (including CRs for the encounters), 2 pages fo SRD, leaving us with 19 pages of content, so let’s take a look!

We’ve all been there – we haven’t had time to prepare a module; the shopping trip has become a grind; a wilderness trek has become boring. We know the feeling, when the general mood at the table tilts away from “this is awesome” to “tired/bored” – the easiest way to reassert focus, most of the time, is just sprinkling an encounter in. So this is what this supplement provides.

The encounters themselves do sport a rather interesting set-up – beyond their title, they sport the total EL and XP gained, the environment in which they take place and then go on to describe the general situation, the hook of the encounter, if you will. Beyond the basic hook, each of the encounters sport one or more complications – take e.g. an assault by debt collectors: Complication-wise, the encounter can be modified to sport unresponsive watchmen, downright corrupt ones and even smart lookouts – so yeah, there is some variety herein. The encounters themselves sport, obviously, the statblocks required to run them.

The complications either tend towards complexity or in some cases, represent escalations of how an encounter can be made more challenging. I generally do like these complications, but their execution is not always as refined as I would have liked some plug-and-play-encounters to be – while, for example, the former example of the debt collectors sports functional complications, the ones required for another encounter do require some work. I would have liked the pdf to do for the DM – as far as I’ve understood the premise, these encounters are intended pretty much as plug-n-play and any work a DM has to do diminishes from the chance of the encounter being used.

In a mine that has broken into the labyrinth of a minotaur, the PCs ought to clear out the dangerous foe. For one, we do not get DCs for Survival regarding the labyrinth, which is somewhat of a missed chance. The complications suggest introducing low CR-traps, but do not specify sample traps -a few lines with a unique one would have been nice here. Now no DM should be pressed hard to just select traps, granted, but still – having them available at one glance would have been nice. A similar point can be brought up regarding another complication, which suggests adding the half-fiend template to the minotaur. Now, once again, I can easily add the half-fiend template to a creature without even consulting the books; at this point, I’ve done it so often, reverse-engineered so many statblocks with it, that it has become literally no bother for me. At the same time, though, I think at least a micro-statblock with the relevant stats modified would have made the encounter more plug-n-playable, especially since e.g. pyromaniacs based on street thugs do just that. Perhaps provide one or two unique pieces of equipment along the way?

The encounters themselves, by necessity as non-specific as they are, do also sport treasures and suggested rewards that tie in nicely with the overall theme of each encounter – for yes, I think one can speak of themes here: Most encounters tell a short story that can be unearthed by clever PCs. When e.g. an undead flame spirit erupts from a source fire, the PCs can find a cursed staff of fire which proved to be the doom of said wanna-be-thief turned flaming monstrosity. Now handing in the cursed staff to its rightful owner not only yields a better reward, it can also be used to launch new adventures.

When the supplement provides such micro-choices in spite of the obvious limit in which it operates, I very much enjoy it, as it shows the promise of author Derek Blakely. Now while not every encounter reaches this level of coolness, there are stand-out ones herein – take Sardock the paladin, essentially shell-shocked veteran of too many bouts with the darkness, who has developed a Hydeian personality that is an antipaladin: The poor guy has had his magical therapy botched and now, it’s up to the PCs to take down the antipaladin – alive, so the righteous man locked within his own body can be saved. I adore plots like that. Ambushes by demonic bar wenches, doppelgängers – yeah, there are some great concepts here as far as encounter-premises go. The statblock builds also sport some interesting choices, like e.g. a babau-possessed aasimar or a death knight that needs to be bested in 1-on-1 combat – at least if your DM is as sadistic as me and uses the complication. ;).

My favorite critter herein, though, would be a unique wood giant who can polymorph those touched into trees -one with faces that can still talk or cast verbal spells, but yeah. That guy is awesome and I really wished we got a whole module from this premise!

Editing and formatting are pretty good, I didn’t notice any grievous glitches. Layout adheres to Purple Duck Games’ two-column standard and the pdf sports some neat pieces of full-color art. The pdf is fully bookmarked for your convenience.

Derek Blakely knows how to portray some cool set-ups in these encounters and the builds are also pretty solid. I did enjoy this supplement for the small stories told and the diversity of the challenges provided and hope to see more from Derek in the future – the talent is there! In fact, quite a few encounters herein do feel rather inspired – unique, even. At the same time, however, I do feel that this pdf is hampered by the format imposed on it:

The encounters, for one, feel sometimes like they could have used a page or more per encounter to shine – for example, to get back to the first example: The observing thug as a complication, who may report back and get the PCs into trouble – no Stealth DC, no Perception DC to spot. Some encounters could have used sample DCs for non-violent solutions/trains of thought.

And then here’s the elephant in the room – the encounters sport no terrain peculiarities; no blazing storms, no obstacles, no ravines etc. A couple of years ago, that probably wouldn’t even have caught my attention, but since Raging Swan Press’s encounters tend to sport just that level of detail, a level of detail that makes them more memorable in set-up and rules-repercussions, I couldn’t help but feel like this pdf did not realize the full potential that’s here. A good encounter is equally set-up, participants, complications and backdrop and the backdrop component herein is sketchy – by design, yes, but to an extent where it becomes noticeable. The stories of the encounters and how they are crafted can be considered worthwhile indeed. That component ranged from awesome to ok, but the “miscellaneous component” of encounters falls a bit flat – it’s like getting a great dish with some of your favorite spices, but realizing salt and pepper is missing. Mind you, this is not a bad encounter-collection – it is inexpensive and sports some rather cool ideas…but it also falls flat of what it could have easily been. My final verdict, hence, will “only” clock in at 3.5 stars, rounded down to 3 for the purpose of this platform.

You can get these encounters here on OBS and here on d20pfsrd.com’s shop!