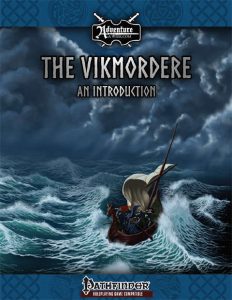 This pdf clocks in at 19 pages, 1 page front cover, 1 page editorial, 6 pages of sheets for notes/ancestral appellations, 1 page SRD, 1 page back cover, leaving us with 9 pages of content, so let’s take a look!

This pdf was requested to be moved up in my reviewing queue by my patreons.

First things first: This is basically the Player-friendly, SPOILER-less and system-neutral version of Ancestral Appellations; it deals with the known fluff etc. and allows a Gm control over which items and abilities to allow/use. I wholeheartedly applaud this strategy.

So, what are the Vikmordere? As the nomenclature used in the introduction makes abundantly-clear, they are a culture of various indigenous peoples, steeped in the nomenclature and cultural trappings of Nordic myth, something I find myself inexorably drawn to. However, unlike pretty much all renditions of fantasy vikings, the Vikmordere are more than that: Basically, picture what would happen when you’d replace the (amazing!) fatalism and mythology with a mysticism that is, theme-wise, more in tune with Native American aesthetics. The Vikmordere, as such, employ a thoroughly unique blending of tropes that set them distinctly apart from both the depiction of pseudo-Native Americans or Vikings; they worship the ancestor spirit and still use observe the Old Ways, but in their remote and rugged valley, they have since dwindled in numbers…though, ultimately, they are very much feared beyond.

Their home, the rugged Vikmordere valley is depicted with notes on clime, flora and fauna painting a vivid and wondrous picture. Vikmordere society centers around the use of natural resources, and while they may once have worshipped petty and vengeful gods, they have, in a surprisingly enlightened and encompassing stance, since then resumed a form of ancestral worship that should resound with quite a few contemporaries. The clans and tribes do not sport a centralized government, though a sort of Þing-equivalent does exist around Serpent Lake, with the Northern Fury Council.

Does that sound too friendly for your tastes? Well, the Vikmordere in Aventyr (AAW Games’ default world) are basically surrounded by the Klavek kingdom, which seeks to exploit their natural resources; much like medieval Vikings, their ships are superior and they have a pronounced tradition of raiding and capturing individuals; while these captives may be considered to be slaves by some, the enlightened notions suffusing the culture also mean that these individuals are treated fairly, allowing them to gain freedom and integrate into the respective tribe, another notion that resounds with historic themes, while changing them in an intriguing manner.

Okay, at this point, you should have a good idea why I consider these fellows to be pretty much an amazing addition to a given world, but that is not where the pdf stops: In the lavishly-depicted map of Serpent Lake (included as a pretty glorious one-page version as well), we learn of the wondrous locales in the valley – from the Everflame Isle that houses a forest of red-leafed Everflame Trees in its sunken interior to Ighdenholm, the top of the world, ostensibly seat of mighty evil unvanquished to the snowfields of sorrow, where a particularly warm summer may well unearth artifacts of conflicts long past, the little write-ups are excellent.

Beyond that, we move on to something particularly important for the Vikmordere – their names. A d20-table with two columns allows you to create a spiritual name, with the first being a descriptor, the second a noun; in the aesthetics of Native Americans, you could thus end with a spirit name of “Sulking Sky” or “Ghost Shadow”; as per Norse/Icelandic nomenclatures, Vikmordere also often introduce themselves as “X, son of Y”, where Y would be the father’s (or mother’s!) name; in light of that, the massive 100-entry-strong table of sample names for males and females is certainly appreciated.

Editing and formatting are very good, I noticed no serious hiccups. Layout adheres to the drop-dead gorgeous 2-column full-color standard for “Into the Wintery Gale”-supplements. The pdf sports excellent full-color artworks, though fans of AAW Games may be familiar with a few of them; same goes for the neat map. The pdf comes fully bookmarked for your convenience.

Justin Andrew Mason, with contributions from Jonathan G. Nelson, delivers something I have been keen to see for a while: More information on one of my favorite cultures in current fantasy roleplaying. The Vikmordere have, even during the humble beginnings of AAW Games, been something that set world and modules apart; their culture, practices etc. feel plausible and fresh in a way that we don’t get to see that often.

“Like culture x, but with twist z.” This twist is then thought through to its logical conclusion, with different degrees of success. Sometimes, something amazing comes from that procedure. However, most of the part, we end up being…well. Bored. Okay, so elves, but Egyptian. Got it. Okay, so dwarves are Scotsmen, got it. Elves that are touched by fire/abyss/etc.

Notice something? Those tropes, in and of themselves, have become cliché in the games we play. It is my ardent belief that they are responsible for the tendency often bemoaned by old-school gamers, that races are just stats in more modern games. And know what? Thinking back, I can relate. When I started playing, the German AD&D supplements about races talked about gnomish roby wine, about elven funeral customs, etc. and painted a picture far beyond “You get +2 to two attributes”; The cultures, while Tolkienesque, were WONDROUS, because they felt like more than an accumulation of stats. It is from this solely number-based design aesthetic, that soulless “template” racial variants sprang. If I had a dime for every lame desert-x variant of a race I had to read over the years…but I digress.

As a result of the customization-demands of modern gamers, many racial supplements have simply lost the means to make a culture/ethnicity/race feel plausible…and as a result, gamers skip the ever shortening flavor-texts; it’s a vicious circle and most folks that have encountered it are probably not even aware of it. So, back in the day, when I was tearing through AAW Games’ first offerings, the crew asked me what I’d consider to be their greatest strength.

I replied that it’s hard to grasp, and frankly, it took me a while to enunciate my feelings properly. As someone with a basic grasp of cultural anthropology and social sciences, it dawned upon me that one crucial, undeniable strength was that they managed to tap into a sense of wonder, while remaining plausible. I could picture this strange culture that never was…and in another world, it may well have been. Beyond just a blending and twisting of tropes, the details elevate the culture beyond a mere blending of themes, to something that is separate, but thoroughly distinct from its parents.

While the elevator pitch for the Vikmordere would be “Viking Native Americans”, that ultimately does not do them justice; I find myself excited, always, for new adventures set in the Vikmordere valley, always in the hopes of learning something new…and that is something only precious few cultures have managed to accomplish in the last couple of years.

It should be noted, that the similarities to parent cultures, while only running skin-deep, also allow the Vikmordere to be easily and seamlessly plugged into pretty much any fantasy world; it is only slowly that they transcend the connotations of their parent cultures, becoming something different…which may, in and of itself, generate a sense of tension and excitement at your table.

In short: This is a really good, system-neutral first look at the Vikmordere, one that does not SPOIL any of the modules featuring them, while giving players a good first grasp of these peoples. That being said, for maximum fun, I’d urge you to use this differently: Make the PCs part of an expedition; have them encounter and interact with the Vikmordere, separate fact from fiction…I used that particular strategy in my own campaign to great effect.

…yeah, I think I like these fellows. In fact, I find myself hoping that AAW Games will continue to craft their thoroughly and unique races and cultures, above the ground and below. My final verdict? Well, have I mentioned that this is FREE? As in “costs $0.00”? Yeah, I’d strongly suggest downloading this – well worth checking out! My final verdict will clock in at 5 stars + seal of approval.

You can get this cool booklet for FREE here on OBS!

The Into the Wintery Gale mage-adventure can be found here on OBS!