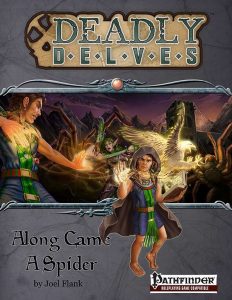 This installment of the Deadly Delves-series clocks in at 19 pages, 1 page front cover, 1 page editorial, 1 page advertisement, 1 page SRD, 1 page back cover, leaving us with 14 pages of content, so let’s take a look!

This is an adventure for 1st level characters and it should be noted that it comes with a second pdf that contains its two full-color maps both with and without grids in player-friendly versions – kudos for providing these! This being an adventure-review, the following will contain SPOILERS. Potential players should jump to the conclusion.

All right, we begin this module pretty much in medias res, as the adventurers arrive at the village of Mossdale, only to find it overrun by spiders – the village does not come with a sample map, but there isn’t necessarily one required. The PCs will pretty much immediately be thrust into combat with the first of MANY arachnid foes – while the main force of arachnids seem to have retreated for now, the search through town will pit the PCs against pretty dangerous foes, including spider swarms – but thankfully, one of the aforementioned mapped locales would be an alchemist’s home, where acid and alchemist’s fire can be procured…and where one of the few survivors can be found. For such a detailed and well-mapped locale, I did wish that that encounter sported a bit more options to creatively use the lab in combat, but that may just be me. As provided, care should be taken, but there are no exceedingly weird things that can happen. Among the supplies provided by the grateful alchemist, there are moss ropes that somewhat enhance climbing capabilities, representing a new item here.

Ultimately, the PCs will have to venture into the woods, where a list of random encounters can spice up things. Credit where credit is due: The woods are interesting and sport only few squares of light undergrowth, with the spider population making climbing to canopy levels rather easy (and feasible) for level 1 characters. Venturing into the woods, the PCs soon happen upon a wererat, who asks to parley – his rats have just been slain by the spiders and he wants them dealt with – he can also point the PCs to two potential sources for the strange incursion: Mites and an ettercap. He can point them towards both. Arriving at the ettercap’s lair, the creature is actually baffled, sad and somewhat innocent – it did not send the spiders to attack and was abandoned by its flock. The mites, meanwhile, are being slaughtered when the PCs arrive, making them also rather poor suspects. There is a 3rd encounter that may be one of the deadliest herein, one with a rather nasty druidess – who is not responsible either, but unlike aforementioned monsters, she is perfectly willing to ambush and slaughter the PCs…and Conrad the wererat only warns the PCs of her if they’re really nice…

Ultimately, the trail leads the adventurers towards a circle of stones left by the Drothic people – here, defeating more arachnid foes will allow them to proceed into the depths (provided they can make their way past the giant spiders and the fiendish trap door spiders) – and ultimately find a giant assassin spider that behaves rather uncharacteristically: The veil to the ethereal plane has thinned, allowing an entity called “The Grand Hive”, a being of pure thought, access to our world – well, it can control spiders. It seeks to expand its dominion…and it cannot really be slain in this module: While its potent host (CR 4, stats provided) may be defeated, the bragging entity can only be sent back to its domain, preferably before all of Mossdale meets a rather nasty fate. Minor complaint here: It would have been really nice to get a map of the arena where the final boos is faced – only the above-ground battle-ground with the giant spiders is mapped.

Editing and formatting are very good on a rules-level, good on a formal level – I noticed a few minor typos, but nothing grievous. Layout adheres to the nice 2-column full-color standard of the series. The interior artwork is generally rather impressive and the full-color cartography is detailed and nice, where provided. The pdf comes fully bookmarked for your convenience.

Joel Flank’s “Along Came a Spider” is a solid critter-theme module; the foes employed are pretty deadly for first level characters, making this a challenging, but fair module, particularly if the PCs don’t try to murder-hobo everything. I absolutely love the BBEG of this module and how it can be used as a great recurring villain that could theoretically carry a whole campaign – a tie-in with Fail Squad Games’ Fosc Anansi (or any drow-book) would e.g. be very much possible. That being said, while I enjoyed the module for the unpretentious offering that it is, it does suffer a bit from the village not being mapped and from the final boss fight having no map – here, some could terrain features and a creative arena would have added this cool final oomph to make this stand out.

Speaking of the BBEG – it may well be a bit too cool for its own good. Personally, when reading this, I figured that it read mostly like a prologue for the big saga, for the tough fight against the entity – an establishing shot, if you will. You may like that (I certainly do!), but be prepared to have your PCs focus on thwarting the entity afterwards – you will pretty much need to deliver a follow-up here, making the module potentially less self-contained than what some GMs are looking for. Personally, I would have also enjoyed the book making more use of its unique wood backdrop’s terrain features, but that is just me complaining at a high level.

That being said, structure-wise, this is a very vanilla adventure – it is pretty linear and while it delivers a good blend of challenges, you should not expect to be utterly blown away by what you’ll find here. All in all, this is a solid adventure, slightly on the positive side, which is why my review will clock in at 3.5 stars…but ultimately, I feel that I can’t round up for it.

While I don’t have the 5e-version (and thus can’t comment on its merits or lack thereof), that iteration can be found here!