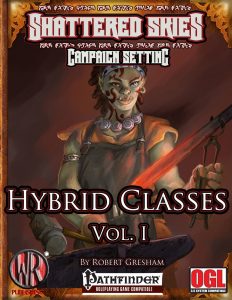 This collection of hybrid classes clocks in at 34 pages, 1 page front cover, 1 page editorial, 1 page empty after editorial (why?), 2 pages of SRD, 1 page advertisement, 1 page back cover, leaving us with 27 pages of content, so let’s take a look!

The mariner (available as a stand-alone PWYW-file), while mechanically better than these three fellows, is a decent, if unremarkable coastal specialist. I have covered all of these classes in more depth in my respective reviews of the books. I’m not going to repeat all my gripes with them here.

That leaves us with the looter, so let’s hope for a gem in this compilation of misses, shall we? the looter is a hybrid of barbarian and rogue and receives d8 HD, 6 + skills, and “looter’s are proficient with all simple weapons, plus hand crossbow, rapier, sap, short-bow and short sword.” [sic!]. They are proficient with light armors as well. They gain good Fort- and Ref-save progressions and a nonstandard BAB-progression: While they start at +0 at 1st level, they gain full BAB-progression each level, excluding the 5th, which means they’ll end up with a BAB of +18 at 20th level. They begin play with fast movement (+10 feet) and also receive sneak attack at first level, increasing sneak attack every odd level thereafter. Additionally, they begin play with Weapon Finesse, which, at third level, may apply Dex to damage instead of STr, gaining this benefit for another weapon at 11th and 19th level.

The eponymous looting ability of 1st level translates, rules-wise, as Improved Steal (not properly capitalized in the pdf), with 6th and 9th level providing the next upgrades in that maneuver’s feat tree. 12th level nets even the mythic version of the Improved Steal feat, substituting 1/4 of her looter level as mythic tier. I get the idea here, but why bring mythic into it? Sure, the feat’s bonuses are pretty standard and work in non-mythic gameplay, but personally, I’d have translated them to non-mythic gameplay and added “This doubles as blablabla for prerequisites…” – if only to take a it the edge of a kneejerk reaction of suddenly seeing mythic in a regular class progression. Still, only cosmetic as far as I’m concerned.

15th level nets the option to execute a steal attempt as a swift action before or after taking a standard action once per round. Now RAW, this would make it impossible to use this ability when using a full attack. 20th level lets the looter perform the maneuver as an immediate action – the once per round caveat, in both cases, is a bit odd, but doesn’t necessarily hurt.

2nd level nets evasion and the swift foot ability, which adds +10 ft movement rate for 4 + Con-mod rounds, +2 rounds per class level, with 8th and 14th level extending the benefits to +20 and +30 ft., respectively. 3rd level nets Danger Sense, 4th Combat Expertise (not properly formatted) and uncanny dodge. 5th level provides Deep pockets, which provides the Sleight of Hand skill unlocks. 10th level provides, analogue, the Appraise skill unlocks. Finally, 15th level nets the Perception skill unlocks. Which is weird: Either you play with these…or you don’t, right? If you already play with them, they make less sense as class features, particularly as late as 10th level. If you don’t…they make kind of sense…I guess. On a formal level, it is evident that they have been ct-copy-pasted, since they use the second person instead of the third, so if that’s something that bothers you, now you now.

6th level nets a 1/day Sleight of Hand reroll, +1/day at 10th level and every 5 levels thereafter,. Improved Uncanny Dodge is unsure where it’s gained: The text reads 5th level, the table 8th. 10th level nets improved evasion. 12th level nets skill mastery (as the table calls it) or Sleight of Hand mastery, as the class text calls it – skill mastery with one being locked as Sleight of Hand, basically. 14th level nets immediate action no escape (double movement, only for purpose of following a withdrawing foe), usable for as long as the character still has swift foot uses left. 16th level nets defensive roll and 17th careful scavenger, which nets + Con-mod rounds +1 dodge bonus to AC versus melee attacks “which increases by +1 for every 6 levels the looter has attained” – which makes it pretty clear that this ability was ccp’d from a lower level. Why not rephrase it properly? 18th level provides Opportunist. As a capstone, the class gets the option to spend a swift foot use to gain a dodge bonus to AC and Reflex saves equal to Constitution modifier for 1 round. Additionally, 20th level provides the Sense Motive skill unlocks.

The pdf also contains several feats collected for your convenience, from Mythic Improved Steal to those featured in the mariner pdf as well as the aura of inconspicuousness and renew air spells previously published.

Editing and formatting are not good. The classes have inherited all original issues, making it pretty clear that none received a further close examination when compared to their original sources. Layout adheres to a nice two-column full color standard and the pdf sports some nice artworks, both original and stock. The pdf comes sans bookmarks, which is a HUGE no-go for a pdf of this size, particularly one that, like all Wayward Rogues Publishing-pdfs, does not allow for text-search…which is quite ironic, considering the amount of previously published material that was used in making these classes.

Robert Gresham’s compilation of hybrid classes is not one I can recommend. While the mariner is decent on its own, the forgepriest, shadowskiver and forest warden are all problematic, bordering on non-functional. Which is somewhat of a pity, considering that the looter is by far the best hybrid class he has penned among the books I’ve covered so far. It is flawed, has, like others, abilities that contradict when they’re gained and similar no-goes, but the focus on stealing and the swift foot-mechanic make for a unique idea. I wished there was more interaction with it as a resource, but hey. The use of Skill Unlocks in the class progression and the quote of one mythic feat (which is not that strong, mind you!) as well can limit its usefulness for some games, though. The class feels like, with a pass by a good dev who can refine it and some actual choice and player agenda (it has none and is completely linear!), it could have been a good class. As written, one looter will be identical to all other looters regarding class abilities. As a person, I dislike the non-standard BAB-progression, but as a reviewer, I can live with it. You have to cherish the small things in life, right?

I so wished this was the improved version of those Cultures of Celmae classes. I so wished that the looter was this piece of genius that would elevate this pdf. Instead, we have two extremely linear, decent classes, one of which is available as PWYW, and 3 trainwrecks. I can’t recommend this pdf. My final verdict will clock in at 1.5 stars, rounded up by a tiny margin due to the presence of mariner and looter. Unless you’re a completionist, skip this. Here’s the good news, though: This represents the low point of the early Wayward Rogues Publishing hybrids. It gets better.

Youc an get this pdf here on OBS.