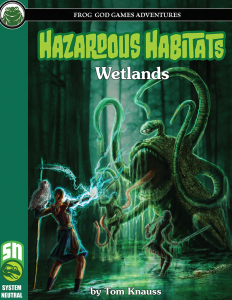 This installment of the Hazardous Habitats-series clocks in at 56 pages, 1 page front cover, 1 page editorial, 1 page ToC, leaving us with 53 pages of content, so let’s take a look!

Okay, so at this point, you probably are familiar with the series and its basic premise, so in all brevity: The Perilous Vistas hardcovers for PF1 were some of the best books Frog God Games released for the system, at least in my book; their blending of gamable material and scientific facts for the biomes they depicted were great, and it helped that we got well-wrought modules in the respective environments as well.

I always bemoaned the fact that the terrain-centric rules didn’t get an even more pronounced place to shine in them (though they did a neat job making the environments come alive), and thus, this series per se scratches an itch I’ve had for quite a while. The Hazardous Habitats-line of pdfs elaborates upon the terrain and provides generators that help the GM create plausible versions of the respective biomes and the creatures that inhabit them.

There are, however, two consistent issues with them, which keep them from attaining true greatness. The first and lesser one being the exclusive focus on imperial/US-centric measurements; while most roleplayers are by now very much familiar with feet, miles, etc., the same can’t necessarily be said for mph for windspeeds, and degrees Fahrenheit. The latter in particular being something that not only makes scientifically no real sense, it also is something I just can’t wrap my head around, and I’m more immersed in US culture than many other non-US-citizens. Not getting alternate values for degrees Celsius for the weather compromises the utility of aspects of the books for quite a few members of the international demographic, yours truly included.

The second persistent gripe I have with the series pertains to its insistence of being system agnostic, a factor that is also relevant for my readers in the US. While the first part of the book indeed works regardless of system, the approach falls a bit apart and becomes cumbersome when it comes to the respective hazards; these come front-loaded with a  statblock of sorts that notes means of detection, identification, avoidance, escape, dimensions, effect-severity, damage type by ability score, conditions, complications and cures/remedies, if any. It is obvious that the like can’t be properly handled in a system agnostic context, and as such, e.g. “Easy Dexterity-based saving throw partially” and similar aspects are noted; the baseline from which you’re supposed to extrapolate the applicable conditions tends to be 5e, though e.g. “sickened” would usually be expressed with poisoned instead in that system; in a way,  it’d have made more sense to stick properly to 5e, or to have a quick table by system – one value for PF1, one for 5e, one for PF2, one for S&W….that sort of thing. Compiling the tables would indubitably have been a bit of a pain, but the immediate utility of the books would have increased significantly.

Anyhow, as a reviewer, I endeavor to rate the books I cover according to what they try to be, and the different Hazardous Habitats installments all execute the general baseline in a pretty successful manner, considering the self-imposed limitations; the minor differences in quality of the books, ultimately, are imho based on two aspects of the system agnostic engine: The first being how well the hazards presented can be tackled by roleplaying a solution. If the information provided allows for the solution of an issue with roleplaying, that’s a good thing for such a book; if e.g. a poison can exclusively be solved via rolling saving throws that you need to extrapolate, that’s work for the GM, and not 100% in line with the attempt at providing something system neutral/agnostic.

The aspects this most pertains to would be poisons and diseases; to take an example from this book, we have water hemlock, a pretty neat poisonous hazard; its damage effects are noted as “Dexterity; poison”, and its flavor notes that it causes debilitating seizures. Okay, cool, I can work with that. The Avoidance line notes that it’s a Hard Constitution saving throw to avoid the hazard completely, while the text itself notes a differentiation between ingestion and contact that is represented in the Cure/Remedy line; it’d have been nice to see some non-rollplay means of solving this fellow. But as a whole? As a whole, you can run this. Poison works presented this way, as well as it can in the system agnostic context.

What doesn’t work so well, would be the animal toxins: We get two statblocks, one for hemotoxic and one for neurotoxic venom, which operate alongside the lines outlined before; however, we get a ton of different snake venoms to add/modify those two baselines: You first check the snake name, whether it has hemotoxic or neurotoxic venom, then apply the modifications from the sidebar; a copperhead, for example, adds Constitution to the Damage Type. The operation per se is simple, but I don’t learn anything about how the individual poisons manifest, whether there are nonmagical cures or means to offset lethality, etc. I can’t help but feel that learning about these factors would have been extremely helpful.

For poisons, this general template of two toxins to which you add modifications still works pretty well, if not perfectly; when it comes to diseases, however, the engine takes a similar route, and here, it simply is not nearly as successful; some of the specific forms at least elaborate upon how their means of contracting them differs from the standard (Naegleriasis, for example, most enter the brain through the cribiform plate of the nose, and can’t be inhaled; waterborne, it can only infect you when submerged), which is great; however, I have NO IDEA how Nageleriasis differs in-game from the other diseases. Granted, it at least gets a brief note that it destroys neural cells, but this is system agnostic, and imho should actually describe the disease in question. For mosquito-borne or tick-transmitted diseases, we don’t even get that. The pdfs, in short, are missing the chance of providing solutions not based on magic and rolling the dice, when outlining symptoms and treatments would have significantly increased the value of the books from a system agnostic point of view.

That being said, while the book does inherit these flaws to an extent, it also inherits the series’ strengths, namely the differentiation between wetland types and powerful generators for the GM. For the purpose of this book, we distinguish between swamps, marshes, and bogs/fens, with percentile tables for vegetation, some sample encounter suggestions and the population-based generators for communities provided; the book does distinguish between saltwater and freshwater swamps, and pretty detailed adventure ideas and sites are provided for them. When it comes to marshes, we differentiate between tidal and non-tidal marshes, and the travel section in these wetlands, with estuaries, canals and beyond being taken into account, also makes this stand out in that section more than some other installments of the series.

Editing and formatting are very good on a formal and rules-language level, where applicable. Layout adheres to the series’ two-column standard with a lot of text per page; the pages have a slight green tint but retain the fact that they’re pretty printer-friendly. Artworks are a mixture of photographs and b/w line-art. The pdf comes fully bookmarked for your convenience.

Tom Knauss’ trip to the wetlands has me somewhat torn; on one hand, no other terrain type has made the issues of the system agnostic approach regarding poisons and diseases so obvious, particularly when healing herbs and the like could have rendered this a truly system neutral supplement. On the other hand, the book also manages to differentiate in a meaningful manner between several types of wetlands that are usually lumped together in gaming, and manages to wring meaning and flavor out of these distinctions.

In many ways, this has some of my favorite components in the series I covered so far, but it also has some aspects that show the drawbacks of the self-imposed limitations; this imho could have been the definite swamp sourcebook if it wasn’t hamstrung by the system agnostic angle; as written, this is a strong supplement, and if you enjoyed the other installments in the series so far, then consider this to be more of that quality. If you’ve been somewhat ambivalent about the series so far due to it not being able to decide on whether it wants to be truly system neutral or cater to a system’s needs, then you might experience the same trepidations I have, and to a greater extent than in e.g. the mountains-book. As such, I feel that this is closer to being a good file than a great one, which is why I will round down from my final verdict of 4.5 stars.

Oddly, this book seems to have vanished from DTRPG, where I got it – you can still get it on the Frog God Games-store here, though.