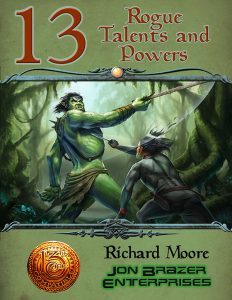 This pdf clocks in at 10 pages, 1 page front cover, 1 page editorial, 1 page SRD, 1 page back cover, leaving us with 6 pages of content, so let’s take a look!

This pdf was moved up in my reviewing queue at the request of my patreon supporters.

Okay, so after a brief introduction, we begin with 3 new talents, the first of which would be Artifact Fence, which lets you carry and use magic items equal to your level +1 sans suffering quriks; on Adventurer feat level, we get to roll twice when enhancing an item via rune activation, applying your choice of the two; the Champion feat upgrade is interesting: When using less magic items than your level +1, and you choose to act upon an item’s quirks to the detriment of your compatriots or yourself, you can improve the benefit granted by 1 tier. Kudos: Has a GM-control caveat. The Epic feat upgrade is super interesting, in that it lets you ignore quirks from item pairs that have fundamentally opposing penalties, and it also offers a cool mechanic that makes magic item overload beneficial, depending on Escalation Die. Cool talent, particularly since, when used with Thievery from the start, it lets you start with a magic item at the cost of a negative Icon relationship!

Knife Thrower increases damage for thrown daggers to d8, with Adventurer allowing you to spend your momentum to add Escalation die to damage; the Champion feat adds the Escalation Die to crit range when you have momentum, and the Epic feat also adds it to damage when you have momentum, and 1/combat reroll a missed attack. Now, this combo is very good for certain builds, and the pdf actually acknowledges this! Better yet, the pdf actually specifies a ruling that can be sued to keep the talent in line. The pdf lets the GM actually make an informed decision here AND provides a means to reign the option in. This sort of care is absolutely awesome to see; it’s the difference between a situationally broken option, and one that can be tweaked to operate properly in any game. Huge kudos!

Magical Savant lets you choose wizard cantrips equal to the highest of your mental ability score modifiers, casting them as a wizard sans Cantrip Mastery. With the Adventurer feat, you get a wizard spell of your level or lower as a daily power, with a level equal to the current Escalation Die, maximum your level. The Champion feat lets you use Sneak Attack with this spell, provided you have momentum. Yes. At range. The Epic feat eliminates the momentum requirement, and makes it recharge 11+ after battle.

3 first level rogue powers are next, with 2 being momentum powers: Clothesline lets you intercept targets and potentially daze them, with the feats increasing the chances of doing so, and Champion/Epic improving the negative condition. Grace Under Pressure is another interrupt action that requires being engaged by 2 enemies or more, and lets you add Escalation Die to AC at the cost of losing it as a bonus to attack; Adventurer adds it to PD as well; Champion makes you no longer lose the bonus to atk, and Epic makes the bonus last. The non-momentum based power would be Vicious Strike, which can only be used while staggered; this one basically nets you ongoing damage, but at the cost of suffering damage yourself; the feat upgrades increase the save to get rid of the damage and let you use it when not staggered, but when you are, you instead increase the effectiveness; the Epic feat can also render nearby enemies afraid.

There are 2 new 3rd level powers: Dirty Trick can only be used once per combat on an enemy, and pretty much lets you cause damage based on your Charisma, with PD as target, and the attack causes a variety of negative conditions, with the feats adding more conditions. The new momentum power presented here would be No Cage Can Hold Me; an interrupt action that is triggered by being hampered, stuck or stunned; a hard save lets you negate them, and you also get to use it instead of Background checks to escape from bindings, cages, etc.; the feats decrease the save’s difficulty and let you spend momentum to lose the inflicted condition.

The 2 5th level powers are Guileful Twist (momentum, lets you add Charisma (or Intelligence if you have Cunning) to damage rolls when hitting foes with attacks or rogue powers; this one has no upgrade feats; Knife Drop requires fighting with two weapons, with a one-handed weapon wielded in off-hand; it’s a daily quick action, triggered by missing in melee, and the missed attack deals half damage instead and you gain momentum; the feats upgrade use to 1/combat (Champion) and ongoing damage (Epic).

There are 2 new 7th level rogue powers, both daily: Be Prepared does not turn you into a lion; instead, as a move action, you get ½ level as a bonus to all defenses vs. the next attack by the targeted enemy. The feats let you retain this vs. one defense and add a counterattack. Painful Smash is a Dex-based attack that makes a nearby ally get triple escalation die to all attacks until the end of your next turn. The feats let you add Strength to damage, even on misses, and the other lets allies that crit the target retain the bonus for another round.

The final new power is the Distracting Dash 9th level power, which is an at-will momentum power that lets you, as a move action engage an enemy engaged with an ally, allowing said to pop free, even if grabbed or stuck. The Epic feat upgrade lets the ally move as an interrupt action without provoking opportunity attacks.

Editing and formatting are very good on a formal and rules language level. Layout adheres to a nice two-column full-color standard, and the pdf sports nice full-column two-color layout, and the pdf sports neat full-color artworks, including a one-page piece. The pdf comes fully bookmarked for your convenience, in spite of the pdf’s brevity.

Richard Moore has delivered a rather impressive expansion here; the rogue options herein allow for cool combat options, roleplaying opportunities, and, moreover, takes a lot of these little combos into account; it is a carefully-wrought, inexpensive, and thoroughly rewarding class expansion. 5 stars + seal of approval.