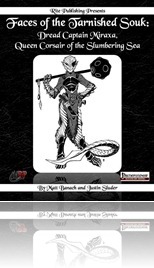 This installment of the FoTS-series from Rite Publishingis 18 pages long, 1 page front cover, 1 page editorial, 2 pages of advertisement and 1 page SRD, leaving 13 pages of content, so let’s check this out!

All right, as per my standard for reviews of the FoTS-series, I’m first going to take a look at the basic additional crunch: We get the determination armor quality, the smashing weapon quality, 3 versions of the magical eyepatch of awareness and an enchanted spyglass. Two traits are also part of the deal, as are 9 feats, which also show that the character will be a deadly challenge for all but the best of PCs – why? Much like the last FoTS-installment, Miraxa’s build utilizes “horrifically overpowered” feats from SGG’s Guide, making her not only a gestalt, but also a master of skills and capable of using magic. Miraxa also utilizes multiple archetypes: Two generic ones, the physical exemplar and the spellblaze, which could be applied to any class, and we also get the Titan Mauler and the Sea Reaver archetype for the barbarian and the pirate archetype for the rogue.

If the cover was not ample clue for you, Miraxa is not a regular humanoid, but rather belongs to the race of the draken, a true-breeding race born from half-dragons – the race is btw. fully detailed and gets +2 to Str and Con, -2 to Cha, dark and low-light vision, +2 to all saves, natural weapons and a bonus on linguistic checks. They also come with 7 alternate racial traits as well as favoured class options for all Paizo-base-classes but ninja and samurai and a racial feat that takes one of your characteristics and improves it, granting you for example vestigial wings/improving them to functioning ones etc. I like the race per se, but it should not be used for PCs – Draken are more powerful than the standard races. The entry also misses the age, height and weight tables necessary for character creation.

Onwards to Miraxa: The corsair’s least powerful CR 7 incarnation already utilizes 3 HO-feats, which with her enhanced stats, increase her CR by 3. Much like the last FoTS-installment, these changes are transparent and make it rather easy to analyse how a given incarnation was built. Her CR 14 mid-level incarnation already sees her CR improved by +5 via these additional tools and has her already looking like a dreadful foe to behold, though her CR 21 high-level incarnation, including her deadly Morningstar Keel Breaker – where unfortunately I have a gripe – the stats of her morningstar are omitted, though I gather it’s supposed to have the new smashing quality.

Her character, dreamburning information also make a nice twist – while she is hardened and tough , she also has a very good motivation – she is actually with child and hell hath no fury like a mother’s! She could be both a deadly foe or an awkward ally – from villain to ally, she is very versatile in both character and build.

And then there’s the coolest bit of additional content – the Impending Doom, a mithral-plated dreadnought with multiple cannons and multiple means of propulsion as well as deadly siege engine-class cannons – fully stated and featuring advancement options for the vessel. Great to see these stats supplement the concept of a corsair queen!

Editing and formatting are very good, though the omission of Miraxa’s signature weapon irks me. Layout adheres to RiP’s classic b/w-2-column standard and the pdf comes with fitting pieces of stock art as well as bookmarks. I’m a big fan of Miraxa as a character and her build is solid to say the least – she’s a complex, cool, versatile and deadly fighter and her vessel is the icing on the cake (though I would have loved ships for her lesser incarnations as well). Usually, she would be a supreme candidate for 5 stars, but the lack of stats for her signature weapon is a major bummer for me. Thus, due to the lack of the weapon’s stats, I’ll be forced to consider her as “only” a good buy, resulting in a final verdict of 4 stars.

Faces of the Tarnished Souk: Dread Captain Miraxa, Queen Corsair of the Slumbering Sea is available from: