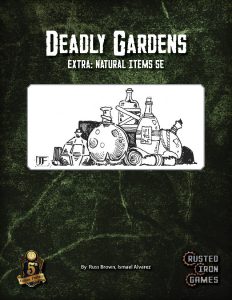 This FREE pdf (included in regular Deadly Gardens, just fyi!) clocks in at 3 pages, 1 page front cover, 1/2 page SRD, leaving us with 1.5 pages of content, so let’s take a look!

The DC to harvest the respective natural items may be a bit high – per default, it is 10 + the creature’s CR, with CR 1/2 et al being rounded up to 1, though, to be a nitpicky prick, the pdf does not explicitly state that one should round up. Conversely, the DC gets high pretty fast at higher levels. This does get a pass, though, since the two sample items provided make that apparent. Format-wise, natural items sport a Source that denotes the target creature from which an item is harvested, the Harvest line that states the skill used and DC and the yield. Yield denotes the number of such items you can harvest from a given carcass. Of course, price and weight also are included.

The sample items herein would be the cockatrice tongue, which, when consumed raw, grants advantage on saving throws versus petrification and paralysis. Mimic adhesive is interesting in that you can gain more of it when you succeed by +5 or more when harvesting. Mimic adhesive can be used as a glue, obviously, and is generally a nice item; I won’t complain about no AC given for the glue, since the GM should be able to assign one – however, here a bit of Pathfinderism has crept into the pdf: The glue has 5 hit points…and hardness 3. After extensive perusal of my books and the SRD, I couldn’t find any mention of hardness – was this supposed to be a damage threshold?

Editing and formatting are good, though I noticed a minor glitch here and there. Layout adheres to Rusted Iron Games’ two-column color-standard and the pdf is relatively printer-friendly. In spite of its brevity, the pdf is fully bookmarked – kudos!

Ismael Alvarez has done a good job converting Russ Brown’s pdf; while not an expansive pdf, this is FREE and I love the general notion of natural items. While not perfect, this is a nice bonus and certainly worth the download. Hence, my final verdict will clock in at 4 stars.

You can get this pdf for FREE here! (Or as part of any 5e Deadly Garden, obviously!)