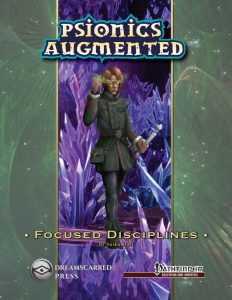 This installment of the Psionics Augmented-series clocks in at 10 pages, 1 page front cover, 1 page editorial, 1 page SRD, 1 page advertisement, leaving us with 6 pages of content, so let’s take a look!

Clairsentience begins with the aura sight ability at 8th level – as long as you maintain psionic focus, you can see the alignment of creatures, with the expenditure as a swift action allowing you to see the intensity of the aura, 14th level lets you smite evil at 1/2 class level 1/day (+1 every 4 levels thereafter), except it applies to any creature with an alignment different than yours. I’m…not a fan of this one, to say the least. I already dislike detect abilities that are at-will, but thankfully, players tend to forget these. This one’s always on, which is extremely annoying from a GM and internal setting-logic perspective: When a significant array of people can see alignment sans even trying, hiding your alignment becomes even more annoying and may wreck quite a few of assumptions of modules. Not gonna get near my table.

Falsehood Allows you to expend your psionic focus, starting at 2nd level, to penalize the next two d20-rolls of a foe within 30 ft, with 8th level providing a 20 ft. AoE-bursty variant. Both allow for no save, but ultimately won’t break the game. Reading provides, at 8th level, a retroactive bonus of +2 to an attack roll or saving throw 1/day, with every 2 levels increasing the bonus by +1 and adding 1/day use and 14th level allowing you to share the benefits with an ally. Also at 14th level, the discipline has another annoying metagame ability -1/day learn a creature’s alignment, lowest and highest ability score and what classes it has levels in. If you also expend your psionic focus, you also learn the 3 highest skills and the creature’s HD. Not a fan. Terror adds 2 rounds of shaken to creatures failing to save versus your clairsentience powers, with focus expenditure increasing that to frightened. Every 4 levels thereafter increase duration by +1 round. This one…is nasty. 14th level nets you an always-on-while-focused 10 ft. aura that works somewhat akin to a hex; on a successful save, the target’s shaken and becomes immune for 24 hours, on a failed save, the target becomes panicked for 1d4 rounds. Personally, I think the immunity caveat should apply to the whole ability, not only to the successful save, but that may be me and is just a design-aesthetic preference.

Metacreativity sports the crystal discipline…and it has a problematic component: Crystal shot allows the psion to expend his psionic focus as a swift action to fire a 30 ft.-range, two range-increment piercing lance of crystal, with x3 crit mod. The lance can (but does not have to!) use Int-mod instead of Dex-mod to calculate atk. Base damage is 1d8, +1d8 at 5th level and every 3 levels thereafter. On its own, this is not problematic, but the increased damage output, particularly for multi-class’d characters, can be nasty. At 8th level, the base damage of the ability is added to attacks with all manufactured weapons while maintaining focus. Guiding provides bonuses to all attacks against foes within 25 ft, with 14th level allowing you to expend your psionic focus as an immediate action to double the bonus for a single attack made within 30 ft. of you. Plasmic lets you create a skill-enhancing ectoplasma tool and 14th level makes your tools really potent. Steel allows you to expend psionic focus to temporarily buff your AC versus an incoming attack and 14th level provides an always-on-while-focused +5 shield bonus to AC.

Psychokinetists may opt for Blaze, which nets fire resistance and the option to temporarily extend its benefits to allies while damaging nearby foes. 14th level allows you to reduce the fire resistance of foes versus your fire-based powers, with creatures sans resistance being treated as though they were vulnerable to fire. Additionally, resistance reduced to zero results in fire damage for nearby creatures…which is a bit odd: So, does this damage also apply if a creature has no fire resistance? The rules could be interpreted either way.

Boom adherents add 5-ft-radius minor sonic damage to single-target powers and 8th level adds deafened for 1 hour to sonic-based single-target powers. Somewhat wonky: “You may expend your psionic focus to affect all creatures within 5 feet of the creature instead.” I *assume* this only applies to the deafened condition and that the target still is affected. Chill similarly reduces all movement speeds of creatures affected by your cold damage dealing powers, but including AoEs this time around…which is pretty OP regarding terrain control. Oh, and it has no duration or means to cure. Speaking of which: 14th level lets you expend psionic focus to stagger foes – even on a successful save, but only for 1 round! Still, considering the power level of the staggered condition, this is OP.Spark grants you bonuses for successfully caused electricity damage for short periods of time, with high levels allowing you to reduce the duration to extend the benefits to allies within 20 ft., but only a limited amount of times per day.

Psychometabolism specialists can opt for the adrenal discipline, which nets you scaling dodge bonuses to AC and Ref-saves when manifesting psychometabolism powers and allows you to add buffs to your personal-range psychometabolism powers. No complaints here. Animalia adds an augment option to all psychometabolism powers to enhance your physical attributes at 8th level and 14th level allows you to retaliate when successfully critically hit via AoOs with bonuses, but only a limited amount of times per day. Second Gear enhances your movement rates while focused and 14th level allows you to manifest two powers that require a standard action or less as a full-round action, with your manifester level being the cap regarding total power point cost and +1 use at 16th, 18th and 20th level. Significantly stronger than resilient body and metabolic healing…not a fan. Storage nets you basically a built-in bag of holding and 14th level allows you to empty this pocket in an explosive burst as a standard action, dealing 2d6 per cubic foot you filled. the bag starts with oen cubic foot and gains + 1 at 4th level and every two levels thereafter. oh, and no save to halve the damage.

Psychoportation specialists that specialize on bypass may teleport 20 ft as a move action when expending their psionic focus and the ability contradicts itself – it says once “at-will” and then goes on to state daily limits that increase…so, which is it? Starting at 14th level, you may “gain insight on a single Stealth check to hide equal to your class level” -that should probably be “insight bonus,” since “insight” on its own is not a thing in PFRPG. Drive allows you to short-range teleport willing allies, with higher levels providing group-ports. Labyrinth allows you to bypass tremorsense and blindsense and at 14th level, you gain skill-bonuses to Survival and Knowledge (geography). Retrieval lets you call unattended objects nearby to your hand, with 8th level providing a free returning to thrown weapons.

Telepaths may elect to specialize on channel: This allows you to link minds with a single creature…and unwilling creatures get no save to resist. Can you see the gaslighting plot? 14th level allows you to send messages to targets you linked with in the last week – which is generally cool and allows for some cool tricks. Specialists of the closed discipline allows you to render a creature temporarily deaf and bereft of telepathy, with higher levels increasing the damage you and your allies cause against the target. Personally, as much as I dislike it, I’d have made this precision damage due to internal consistency of the system. Informants add 1/2 level to all Knowledge and Diplomacy checks while focused and, on a failed Stealth check, they may, at high levels, reroll with a bonus when they expend their focus – a cool ability, but at 14th level very late. Mystique adherents can break a LOT of plots: They can concentrate on a target…and the ability is wonky as all hell: “As a standard action while you’re psionically focused, you make a Sense Motive check. One intelligent creature within 30 ft. of your choice must then make a Will save.” Okay, against which DC? the usual 10 + 1/2 level + manifester mod? The Sense Motive result? No idea. On a failed save, you gain 5 hours (!!!) worth of the creature’s memories, +1 hour for every point by which they fail the save. Not functional as written can wreck A LOT of modules. The 8th level memory implant is similarly problematic – “If they fail, you convince them that they experienced something that they didn’t actually experience. They may use your Bluff modifier instead of their own when convincing people of this.” The “may” here implies that they can choose, which they shouldn’t be able to. Also: The implanted memories lack specifics: Can you implant memories that supersede others? Can you rewrite a whole life? No idea, since the ability fails to specify the extent of its powers.

Editing and formatting, on a formal level are top-notch. On a rules-level, it is less consistent in its internal terminology than I’ve come to expect from Dreamscarred Press – “expend your psionic focus” versus “expend psionic focus” and similar cosmetic hiccups can be found here, with some pieces of rules-language being simply not as clear as it should be. Layout adheres to Dreamscarred Press’ 2-column full-color standard and the pdf comes fully bookmarked for your convenience and with a second, more printer-friendly version. Artwork-wise, the focus lies on fitting stock art.

Sasha Hall’s expansion for psionics, let me reiterate that, isn’t bad. Considering the tight wiggle-room that the concept offers, there are some seriously cool options here. If you don’t share my loathing for metagame-y abilities, the pdf will gain a bit of appeal. At the same time, though, the overall pdf is uncharacteristically inconsistent for a Dreamscarred Press offering. The power-ratio of replaced abilities is off in quite a few places regarding the abilities replaced and comparable abilities offered in the very same book. That is one issue this has; the second would be that the book does have a couple of internal hiccups: The telepathy-lock-down, for example: Can it be used to sever the connection to a collective, as employed by the tactician, vitalist, etc.? The focused discipline hampers “all telepathic abilities” – which is NOT a defined term in the context of Ultimate Psionics. There are quite a few of these issues here and they accumulate. This may not be bad, but it does fall short of the standards established by Dreamscarred Press. In the end, this is a mixed bag and hence, my review will clock in at 3 stars.

You can support Dreamscarred Press directly here on their patreon!