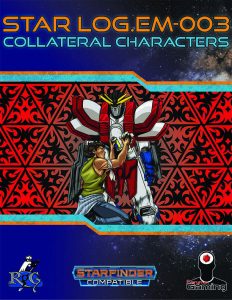 We begin this pdf, as always, with a brief, flavorful recap, as these logs are presented as queries to a database; this time around, the tie-in to the shared Xa-Osoro system that is assumed to be the backdrop for Rogue Genius Games and Everyman Gaming’s Starfinder-supplements, is particularly profound: One of the system’s binary stars has imploded in a black hole in a catastrophe known as Regicide, which destroyed the Radiant Imperium’s central seat of government in Azan, creating the region now known as Blood Space. As a consequence of this collapse, piracy has run rampant, including a practice of slaying all adults, taking kids as de facto slaves – collateral for the damages incurred by boarding and vanquishing their caretakers. Thus, this pdf deals with such former slaves…which btw. are considered to be property even by the Imperium’s laws. Ouch.

A character with this background can be represented by one new theme and one archetype, the first of which would be Collateral; +1 Con. The theme nets, at 1st level, the option to choose a Profession skill. Recall knowledge DC is reduced by 5 to recall hierarchies, practices, personal and illicit dealings regarding the profession chosen. Additionally, you gain Athletics or Piloting as a class skill or +1 to the chosen skill if you already have it as a class skill. 6th level yields +1 morale bonus to Piloting and damage rolls when at 0 stamina or when a vessel you’re piloting has less than half total hull points left. 12th level yields +1 hit point and Stamina Point per level. I assume this also applying to new levels gained, as per Starfinder’s Toughness feat, though unlike the feat, it does not have the “whenever you gain a new level”-sequence, which means that it may be read as a one-time boost. Clarification would be nice here. The 18th level ability nets you a pool of Collateral Resolve Points equal to Constitution bonus, minimum 1. These may not be used in any other way than to stabilize and if you have no regular Resolve left, you lose one Collateral Resolve Point per round instead. You don’t die as long as you have either Resolve or Collateral Resolve Points left. Basically, this makes you tougher to kill. Nice.

The archetype presented herein would be the diehard collateral, whose replacement abilities come at 2nd, 6th and 9th level – this one represents characters taken as collaterals while kids or in their adolescence. The 2nd level ability lets you spend Resolve to stay in the fight after stabilizing, also healing 1d8 + Constitution modifier HP as a reaction. The amount of hit points improves to 3d8 at 4th level, 5d8 at 7th, 12d8 at 10th, 16d8 at 14th and 20d8 at 17th level…The ability has been revised and improved, now granting temporary hit points instead of full healing, contextualizing it properly with e.g. Solarian abilities.

Bloodied Frenzy at 6th level nets +2 untyped bonus versus fear effects. Whenever you have 0 Stamina, you gain ¼ level as a morale bonus to weapon damage rolls. If you also have less than half of your maximum hit points, you increase that to ½ your level. I am not a big fan of such thresholds à la 4th ed’s bloodied condition. If you have the collateral theme as well, the bonuses stack.

The pdf also provides some really cool, flavorful write-ups of worlds and factions in the Xa-Osoro system, allowing you to contextualize which faction/corporation or world has taken your character as collateral. Really flavorful section!

Editing and formatting are very good on a formal level. On a rules-language level, it is also tight and improved. Layout adheres to Everyman Gaming’s two-column full-color standard for the series. The artwork featured is nice. The pdf has no bookmarks, but needs none at this length.

Alexander Augunas’ collateral characters are a neat idea, executed in a solid manner. The theme featured makes sense to me and the archetype will find its friends. However, there are a few minor aspects that could be construed as problematic. The collateral archetype lets you build a fearsome, fearsome tank, and the revisions made render the options strong, yes, but eliminate the potential for abuse and contextualize them better in SFRPG. My final verdict will hence be upgraded to the 5 stars the revision deserves.