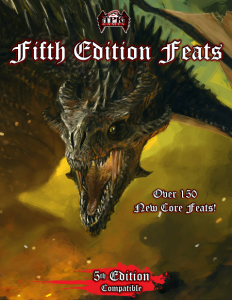 Okay, since this massive book has more than 150 feats, I am not going through them feat-by-feat – that would bloat the review beyond belief. Instead, let’s focus on what the book is…and what it isn’t.

Well, as much as I don’t like to start on a downer, I don’t have much choice here – this book is not perfect. The very first feat, Acrobatic, already has issues. It may require Acrobatics proficiency, but it does grant you expertise (twice proficiency bonus) in the skill, something usually reserved for class features. While this is primarily a rules-aesthetic problem, it still is something feats usually don’t grant you. Additionally, the feat allows you to stand up by expending 5 feet of your movement (okay), 1/short rest advantage on a Dex-based skill check (similarly okay) and an increase of +1 to Str or Dex…which wouldn’t be bad either. However, the feat, much like all attribute-enhancing feats like this herein, does NOT feature the “up to a maximum of 20”-caveat that is the default of 5e, meaning you can RAW cheese that cap.

Unfortunately, such hiccups can be found in quite a few of the feats, with some featuring issues pertaining rules-interactions. Acrobatic Steps, for example, allows you to move up to 1/2 your movement through difficult terrain as though it were normal terrain. Okay…but how does that interact with damaging difficult terrain or the terrain types that can e.g. cause negative conditions? No idea.

The book actually has a take on Alert called “Alertness” that deprives enemies of advantage when “striking you from stealth” and you are never surprised as long as you are neither stunned, nor unconscious. Sounds familiar? It’s basically a marginally renamed version of the Alert-feat from the PHB, with less precise rules-language and modified rules. It’s not the only one herein. That alone may already be enough to sour some folks out there on this book, though, for those of you less familiar with the OGL, I should mention that the feats themselves can be considered to be a kind of “unlock” for other publishers and future books. So yes, I *get* why they’re here and, while I disagree regarding the respective rules-changes, they do have a reason for existing, though they also can end up as problems for issues of overlap.

The Backstab feat has this feature, among others: “You also add an amount of damage equal to your sneak attack dice when you deal a critical hit.” I’ll let that stand on its own, all right?

On the plus-side, there are some feats that really help with character concepts, take for example Bodyguard, which lets you grant your shield bonus to AC to an adjacent ally and use your reaction to either impose disadvantage on the attack of a foe versus an adjacent ally or redirect the attack to yourself. This is per se great. The pdf, however, similarly features a lot of metamagic style feats; i.e. feats that allow you to cast a spell using a higher spell slot than usual for increased benefits. The rules-language here is functional, but could be clearer – how does this type of feats interact with “at higher levels”-casting that does not scale by additional spell slot level, but via hard caps of spell slot levels? One can deduce these, sure…but my contention is that one shouldn’t have to.

Unfortunately, there are feats that make spellcasting completely fall apart. Take Burning Spell. The concept is simple, your acid or fire spells continue to deal a bit damage in the following round at the cost of a spell slot of 1 level higher. (The rules-language isn’t too concise regarding that component in these feats, just fyi.) “You must increase the level of the spell cost by one, and the spell deals two dice of damage the following round to all affected targets. Saves continue to apply.” This is, alas, pretty much a non-entity of rules-language. I assume the damage dice to be equal to those the spell cast, that’s not the whole issue. How is this supposed to work? If a target saved and took half damage, do they take the follow-up damage? Are they considered to be “affected”? Or do they take half of the follow-up damage? Do they get a new save against the follow-up damage? Or does the succeed save prevent the follow-up damage?

I can do this picking apart routine for A LOT of the feats herein.

This is not, however, where the pdf ends: There are several combat maneuver-type feats in this book that do not work on their own or without the 5th edition class options book. Why is this problematic in itself? Well, we all know combat maneuvers from Pathfinder, right? Right. In 5e, however, combat maneuvers are, due to the lower power-level and the quicker gameplay, mainly exist in one iteration, namely the Battle Master fighter archetype’s CLASS FEATURES. Go ahead, take a look. I’ll be waiting here.

Okay, read up on the guy? Great! You may recall Feinting Attack, right? You know, the move that costs the bonus action AND a superiority die to execute? For advantage on the next attack roll and + superiority die to damage? Well, this book has the following feat: When you reduce a creature to 0 or fewer hit points, you can make an “Intimidate” (should be Intimidation) skill check to demoralize all enemies within 30 feet as a free action. Enemies need to see you reduce the foe to 0 or below, sure…but still. What does demoralize do? Well, the condition means that the target suffers disadvantage on all attacks and skill tests against you for a number of rounds equal to your proficiency bonus, with a Wis-save versus “DC 8 + the creature’s proficiency bonus + Strength of Charisma bonus.” Okay, one: there should be “the creature’s” before the attributes for internal consistency. Who chooses whether Str or Cha is used? Usually, “your choice” or a similar phrasing is employed in 5e. The wording, while understandable, is wonky. This one can be used ad infinitum, mind you – no cap, no diminishing returns. In contrast to Pathfinder, where Sense Motive can help, not even Insight helps with this save in any way. Power-wise, this is stronger than the feint, does not require the expenditure of a limited resource, can be used faster and affects multiple targets for longer. In short, it’s broken before I even pull out a bag of fluffy kittens to massacre. Can you see the munchkins walking around, slicing kittens to ribbons as their foes quiver and shake? I can.

Even pretty basic feats have significant botches. Elemental Channel allows you to use channel divinity to turn or destroy outsiders of your chosen elemental subtype. Elementals are neither outsiders, nor a subtype of them in 5e. They’re elementals. In fact, the 5e monster manual DOES NOT HAVE THE OUTSIDER TYPE. 5e also does not have subtypes, it has tags. The feat also does not specify whether the “chosen elemental” can be switched, or must be chosen upon taking the feat. It’s a simple concept…and it still is &%/&$ not working. For &%&/’s sake.

Oh, Healing Chakra screws up the whole frickin’ limited healing economy of 5e. Use ki to heal allies. You know, the stuff that you can regain via short rests? Want a more powerful version of Dual Wield for maximum confusion instead of building on it? This pdf is happy to oblige. I’ll stop right now.

Editing and formatting on a formal level are okay. On a rules-language level, they are, there’s no way around it, BAD. As in: Violates obvious 5e-tenets bad. As in: Has obvious exploit, regardless of system included. Layout adheres to a pretty solid two-column full-color standard with a couple of full color artworks thrown in the mix. The pdf comes fully bookmarked for your convenience.

Brian Berg, PJ Harn and Edward Long usually aren’t that sloppy. I know, harsh. It’s the truth. This book, even upon a cursory glance, does pretty much everything wrong at one point or another regarding rules-language, precision, etc. – not starting with balance. The reskinned and slightly tweaked feats are made worse, even though their existence can be understood. Balance is closer to established Pathfinder standards than those of 5e and potency of feats is all over the damn place. The craftsmanship has more holes in it than Swiss cheese, which is puzzling, considering that the content in Wardens of the Wild, while certainly not perfect in every case, was much better than this disaster.

I know. Too negative. I’m honestly sorry; I hate bashing the work of designers. BUT: Requiring another book sans explicitly stating that it requires another book (unreleased, as per when this was released, but thankfully now) for full functionality for a lot of the feats? Not cool.

Beyond that, 5e-purists will seethe with rage when noticing that this book does not really build on 5e – it is practically a conversion of 3.X/Pathfinder-feats and their concepts to 5e, without really taking into account the ramifications and internal balance of 5e. This, however, may be the one saving grace I could find for this pdf: Pathfinder and 3.X have a lot of great modules. A capable GM can take this book and its feats and use them as a quick and dirty basis to convert the creatures and NPCs, at least the simple ones, from those systems at a faster pace.

As a basis, mind you – the different values of feats in both systems and the balance-discrepancies in this book’s internal structure AND with those established in WotC-publications ultimately mean that, for flat-out allowing it for player purposes, this is simply not going to work.

So, for this and the few gems herein, this may be worth it for some of you. You have to dig deep, though…there’s not a lot of rubies in this crackerjack box. And they’re small. The target demographic, the people who’d be most content with this book, would basically be PFRPG-people who switched to 5e who want to play a game that’s significantly more like PFRPG, including its power-level and options.

Damn…I…I’m sorry. I really am. I try to come up with nice things to say about this book, but for me as a person…there simply aren’t any. This book is all crunch, and in a lot of the crunch, there are severe issues that even a moderately capable rules-editor who is even tangentially familiar with 5e would have caught. I had an experiment: I put some text from the PHB and this one in front of someone who had never played 5e before and asked her to look at the feats and then tell me what she observed, without implying that there are glitches in one text or another. Guess what? Even she did find some of the discrepancies.

This book is extremely flawed, basically works only with copious handwaving, is imprecise, and both internal and external balance is all over the place. I’m sorry. My final verdict is 1.5 stars, rounded down – steer clear.

You can get this book here on OBS.