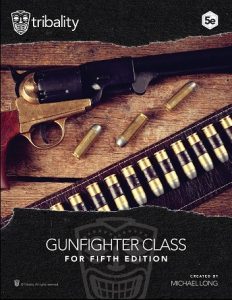 This pdf clocks in at 8 pages, 1 page front cover, 1 page SRD, leaving us with 6 pages of content, so let’s take a look!

This review was moved up in my review-queue as a prioritized review at the request of my patreons. The review is based on V.1 of the pdf.

We begin this class with a brief, concise introduction to the subject matter at hand, including advice on creating a gunfighter and quick-build information. Gunfighters begin play with the option to create ammo and the like, with a nice, suggested alternate rule based on Intelligence modifier. In a minor nitpick, the material cost and maintenance-section of the item mentions $1.00 of the item’s market value – a conversion rate of $1 = 5 gp is provided, but generally, considering the setting-agnostic nature of the class, this may be perceived as a needless complication by some. I won’t penalize the pdf for it, but it is something to keep in mind. If a PC is not using at least 1 hour in a long rest to clean the guns he owns, natural 1s and 2s result in the broken condition for the weapon. A gunfighter can keep a number of firearms in good repair like this equal to his Intelligence modifier. At 13th level, you may craft twice your Intelligence modifier bullets during a long rest.

Now, let’s take a look at the gun-rules required here: Ammo can’t be salvaged (check!), broken condition requires an Intelligence saving throw on critical misses to avoid (no auto-blow-up). Focus is important – these weapons require steadying – as an action, movement is reduced to 0 ft. and, on the next turn, the gun can be fired. Guns are loud and can be heard FAR away and reloading is an action. Firearms with spread deal AoE-damage, but allow for Dex-saves based on you Intelligence modifier and proficiency bonus to negate.

The pdf provides 4 such weapons: Single action revolvers, repeating rifles, shotguns and buffalo rifles, with the latter being the only one requiring focus – and it better should, considering 4d10 piercing base damage, as opposed to 2d6 for the revolver.

The class gets 1d10 HD, simple weapon and firearm proficiency, vehicle (land) ans smith’s tools as well as Dex- and Int-save proficiency and their choice of Animal Handling, Deception, Insight, Investigation (called “Investigate” here), Perception, Sleight of Hand and Stealth regarding skill proficiency. The starting equipment contains a revolver and a horse and includes notes on costs of animals in the Wild West. Gunfighters begin play with a gunfighting style that includes melee-shotgun-using sans disadvantage or double pistol fighting. The latter is somewhat awkwardly phrased “You can treat the weapons as light, and take advantage of two weapon fighting with them.” Does this mean the style grants advantage on attack rolls when dual-wielding? I *assume* no, but wording wise, the use of “advantage” isn’t too great. Duel specialists add Intelligence modifier to atk and damage when one-handing guns. Long-distance shooters don’t suffer disadvantage at long range and add Intelligence modifier to attack rolls. Fast draw specialists have advantage on their first attack each combat and can’t be surprised.

2nd level provides an action surge for +1 action, but only once per rest-interval as well as advantage on Dexterity saving throws versus effects you can see coming – like traps, spells, etc. Ability score improvements are gained at 3th, 8th, 12th, 14th, 16th and 19th level. 11th level allows you to attack twice instead of once.

At 5th level, you may reload one firearm as a bonus action and 6th level allows you to ranged disarm foes once per rest-interval.

Starting at 9th level, you may infuse cold, fire or acid damage into up to 12 of your bullets. 17th level nets you evasion and 20th level allows you to add Wisdom modifier either to attack or damage rolls…which feels a bit odd, considering that the base chassis of the class is otherwise themed around Intelligence and Dexterity.

As you may have figured, the gunfighter does gain the obligatory archetype-selection, this time around called gunfighter path. A total of 3 such paths are included and they net abilities at 3rd, 7th, 10th, 15th and 18th level. The first of these paths would be the bounty hunter, who can choose creatures as their mark, gaining advantage on Intelligence (Investigate[sic!] – should be Investigation) and Wisdom (Perception) checks, gaining +2 to attacks versus them…but they can only have Intelligence modifier marks a day, with long rests resetting the timer. They also deal bonus damage versus marks and at 10th level, heal minor wounds once per rest-interval. 15th level nets a potentially paralyzing shot. 18th level, allows for special double damage shots – oddly, the pdf refers to being affected by “Wing ’em” – which I suppose was a WIP-name for the mark. Still, slightly confusing.

Desperados gain cunning action at 3rd level, 7th level sneak attack (scaling up to +4d6 at 19th level), uncanny dodge at 10th level and vanish at 15th. 18th level lets NO attack roll against you have advantage….which is pretty OP, imho. Somewhat odd: “If you are hit, you may take a reaction to make an Attack against the attack that hit you” – I think, some text is missing here…or the wording’s a bit odd. You can target an attack, okay…what happens if you hit the attack? Do you shoot a missile out of the air? Do you sunder an axe? Or should that be attacker? No idea.

Finally, the Lone Ranger is the outdoorsman and gains advantage on Wisdom (Perception) and Wisdom (Survival) and 7th level nets crits on 19s and 20s. 10th level “Adds another fighting style” – which should probably refer to “gunfighting style” instead and 15th nets you a stunning shot, while 18th level allows you perform 1 level of exhaustion causing shots 1/day. Pretty cool.

Editing and formatting are generally good, though, oddly, the final pages seem to drop a bit regarding their precision. Rules-language similarly is mostly precise and well-crafted, with some minor hiccups. The pdf comes with great, thematically fitting photography-style artworks and the pdf has no bookmarks, but at 6 pages, that’s still okay. Layout adheres to Tribality’s two-column full-color standard and is clean and concise, though the upper and lower borders are pretty broad.

Michael Long’s gunfighter is per se a damn cool class – and for the most part, it is precise and well-crafted, with the first couple of pages only featuring very minor hiccups like “Investigate” instead of “Investigation” or the aforementioned unfortunate wording choice pertaining advantage being good examples. The gunfighter paths have somewhat more glitches and unfortunately, the pdf does have some glitches that influence the rules-language. While the gunfighter is functional and elegant and appropriate for new players due to the relatively easy to grasp rules and low complexity, it is the collection of these minor hiccups that makes it impossible for me to rate this as high as I’d like to. The gunfighter certainly is no funfighter; the gunfighter is a cool class for its low, and more than fair, price point. While not perfect, it certainly deserves a final verdict of 4 stars – if you expect no perfection, you’ll probably love this class as an easy to use, fun Western-class.