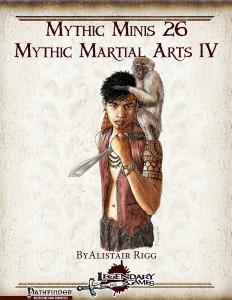 -Monkey Style: no penalties to AC while kneeling/sitting, standing up as swift action or as an immediate action via mythic power.

-Monkey Moves: Swift action or mythic power for 5-foot step even if you have moved; additionally, gain up to 1 min climb speed while in the style. Love this design – breadth instead of depth, adding flexibility – kudos!

-Panther Parry: If you damage the opponent with your retaliatory attack, use mythic power to negate the attack that caused it. I know what you expect. The EZG anti-counter-ramble. No. Why? Because it’s the best parrying take I’ve seen in quite a while. Alas, it also doesn’t work perfectly as written – it probably should be not only a swift action to trigger this, but an immediate action, seeing how the counter attack can also happens on an enemy’s turn… Also, this should probably have a time limit for when the retroactive retaliation no longer applies…

-Tiger Pounce: Spend mythic power as a swift action charge up to 1/2 speed against a target you have hit or maneuver’d since the beginning of your last turn. Nice to keep the pressure on!

-Tiger Claws: Expend your first two unarmed attacks as part of a full attack rather than as a full round action for the attack, leaving you free to utilize further unarmed strikes.

Alistair Rigg’s latest martial arts are pretty cool – the takes on the mythic 3 styles are rather original and increase tactical versatility available to martial artists. That being said, panther style’s wording does suffer from a slight lost in translation-glitch – the original panther style made an exception for the use of swift actions during a time when it’s not your turn, specifically for executing attacks versus foes moving through threatened squares. This caveat (which is an example of sloppy feat design in the first place – that usually would be an immediate action – after all, that’s the defining characteristic of an immediate action!) is not extended to the new benefits granted by the mythic versions, who promptly retain the wording and structure. Now this in no way makes the pdf bad; it’s only understandable. I still would have liked to see an immediate action caveat as well. Still, the parrying mechanic is solid and manages to somewhat alleviate this gripe. On the other hand, what constitutes a retaliatory strike and what doesn’t is not defined and can make this feat-tree confusing. Hence, my final verdict will clock in at 4 stars.