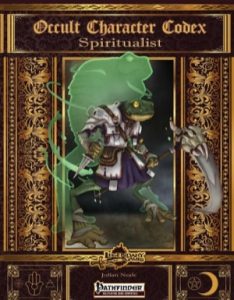 This installment of Legendary Games’ collection of Occult Adventures pre-built NPCs clocks in at 36 pages, 1 page front cover, 1 page editorial, 2 pages of how to use/introduction to the subject matter, 1 page ToC, 1/2 a page blank, 1 page SRD, 1 page advertisement, 1 page back cover, leaving us with 27 1/2 pages of content, so let’s take a look!

Okay, it has been a while since I covered one of these, so let’s recapitualte: The Occult Character Codex-series basically provides NPC-codex style entries for the respective class, utilizing automatic bonus progression as introduced in Pathfinder Unchained as well as buffing featured in the respective statblocks. The statblocks themselves feature a pre-buffing section where applicable and, for ease of reference, save DCs come with F, R, and W as shorthand for the saves in the respective spell etc. entries, allowing for an easy reference.

CR-wise, the NPCs herein range from CR 1/2 to CR 19, covering the whole breadth. The respective spiritualist builds, obviously, feature their respective phantom pet, rendering the overall statblock density of the book relatively high. The builds in the series do try to depict organically grown characters, i.e. the NPCs herein, while being efficient, also feature capabilities that ground them in the respective world, a decision I generally applaud.

As has become the tradition with the series, the NPCs featured herein diverge in their respective focus – while we do have some classic, CORE-races using spiritualists in the book, there also are samsarans and even grippli to be found among the builds. The onmyoji archetype is used in a few of the builds as well – so racial diversity’s here; archetype-wise, the book could sport a bit more diversity.

Regarding the emotional focus of the respective phantoms, the pdf does provide a sufficient array of diverse options, with the foci generally fitting well the theme of the respective phantoms. The same can’t be said about all of the spell-selections certain themes in spells can be readily identified – granted, there is diversity here, but it could have been a tad bit more pronounced. On the plus-side, while a similar observation can be made pertaining some feats, the overall breadth of strategies via builds is significantly broader. Kudos!

That being said, unlike the other OCC’s I’ve covered, there is something I need to mention – the phantoms have some glitches in central abilities; unfortunately, these glitches tend to be rather crucial ones – slam damage is incorrect in some cases, correct in some and does not progress properly, extending the issue to the respective damage caused; similarly, DR-scaling of the phantoms is not accurate. The frustrating component here is that there are quite a few of the entries that work out well, but still, those are pretty central components in the respective build.

Does this make the book unusable? No. But it does limit its appeal.

Editing and formatting, on a formal level, are very good, though this time around, the uncharacteristic glitches in he builds do somewhat limit the book’s appeal. Layout adheres to Legendary Games’ two-column full-color standard and the pdf comes fully bookmarked for your convenience. Artwork-wise, we get some classic LG-artworks as well as the cool cover artwork.

Julian Neale’s spiritualists are the weakest entry in the series and were a rather odd experience for me, reviewing-wise. Why? Because I happen to have the build-notes for them and while these also have hiccups here and there, they are other hiccups – while e.g. the DR in the build-notes for the level 20 NPC isn’t correct, the slam attack base damage actually is. My theory is that: Something went wrong in layout/dev. Some of the glitches obviously are cut-copy-paste hiccups. EDIT: The author has contacted me and taken full responsibility – that takes guts and backbone, so kudos!!

That being said, there is still value to be drawn from this pdf – the builds themselves are pretty complex and even with their glitches, the pdf still represents some seriously spared time. The glitches mentioned can be relatively easily purged and while the pdf thus can’t be considered to be the high-point of the series, neither does it deserve being dismissed. What’s here, generally, is cool and GMs willing to invest a bit of work to fix the glitches get some complex builds out of this one. Still, the pdf could also have employed more in the archetype discipline.

In the end, I will settle on a final verdict of 2.5 stars; if you’re in it for flawless statblocks, round down; if you want the majority of grunt work done for you, you’ll still find use for this. My official final verdict will round up due to in dubio pro reo.