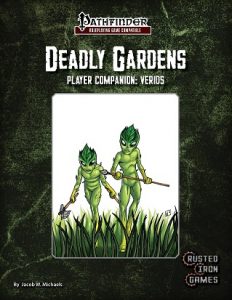 Verids are, as you may have surmised, a new plat-race intended for use as PCs – originally of extraterrestrial origin, they have several unique spins on the established tropes: Beyond looking a bit like plant-like versions of grey men, they seem to have a grudging respect for dwarves (!!!) for their mining prowess, but consider other races to be deviations from the natural order. While personally, I like this spin on the tropes and a GM could rationalize it by them having a somewhat odd or skewed perspective on “natural order”, the fact remains that dwarves, in most campaigns tend to hearken closer to the tropes of scions of civilization and industry, so that may be something to look out for.

Racial trait-wise, they get +2 Wis and Con, -2 Str, are Small, have a slow speed, get +2 natural AC, +2 to Stealth and Knowledge (nature) and require the sun as nourishment – failure to spend 4 hours in the sun results in decreased natural healing. 3/day, they can, as a swift action, extend their arms by 5 feet, increasing reach. Additionally, they replace animal companions with plant companions and can Con-mod times per day (minimum 1) release a 10-foot spore burst as a standard action. This burst sickens targets via a poison effect for 5 rounds on a failed save. Additionally, they get the full array of plant-traits.

Alternate trait-wise, there is an option to replace the photosynthetic drawback with the requirement to use a modified blood drain (that applies to HP instead) to consume blood. Such verids can replace natural armor with limited healing for drinking blood. Instead of the stretchy arms, they can have mildly toxic spores or spores that affect plants. A daily, limited fast healing while the feet are submerged in water can be traded in for the Stealth bonus and the arms. 1/day goodberry and plant growth as SPs are also there, though this one fails to specify which trait it replaces. The natural AC and temporary stretching arms can be replaced with 10 ft. permanent reach (OUCH!) and constant speak with plants can also be found. Finally, spores can be replaced with the ability to grow an object from wood 1/day. As a nitpick, this replaces “spore bur[sic!].”

Okay, so as a whole: Full-blown plant-immunities PLUS all the bonuses…looks like overkill to me. unless you’re already using several very powerful races, the verids end up a bit too strong. Similarly, permanent 10-foot reach is significantly better than the traits it replaces. The primary balance-issue, though, is simply the full array of plant-traits that is not offset by significant drawbacks. Compare that to Rite Publishing’s In the Company of Treants, where even the powerful iterations of the race do not get the full array…there’s a reason for that. Similarly, the skill bonuses are imho a bit bloaty and simply not required for the race.

The pdf also provides favored class options that vary in potency. Alchemists can add +1/2 to the DC of their spore cloud. You know, the Con-mod/day thingy. Ähm…nope. Okay, you can take a feat for +2 daily uses…but seriously, not more? That’s a wasted feat. And the FCO is similarly wasted – why not go for spore clouds in bombs?? Then again, there are some cool ones. Limited fast healing for cavalier mounts in sunlight? Mesmerist stares versus plants? Pretty cool. (Yes, this has Occult Adventures-support!)

The pdf also features the terraformer kineticist archetype: As a move action, these guys can transform plants and minerals in a 20-foot radius for 1 round; if he uses a full-round action, the transformation instead lasts for 1 round per level. While in this terrain, the terraformer reduces burn cost of blast wild talents by 1. If the terraformer does so, he can extend the duration of the terrain as a move action to 1 minute per level. However, as soon as he takes damage, he must succeed a concentration check or accept 1 point of burn as the terraforming area collapses. Okay, I’ll play…so how does this interact with the maximum burn accepted per round? Does the reduction apply before it’s counted against it? What if the duration elapses? Does the burn apply then as the terrain collapses or does it just fade? The question is: Is this robbing Peter for paying Paul with a gambit that you can rob Peter multiple times or not? I *really* like the idea here as a variant to gathering power, but the wording requires some serious clarification.

In particular since 3rd level and every 5 thereafter provide favored terrains, which FURTHER allow the character to reduce burn AND apply the bonus to the DC of blasts, infusions as well as CL-checks. The DC-increase seems overkill to me (kineticist blasts can already be pretty lethal!) – in favored terrain +4, that means reduction of burn by a whopping 4 points…so yeah, this is arguably MUCH better than gather power AND it does not require the crucial action economy expenditure that is one of the central balancing mechanisms of gather power. Ouch.

At 6th level, terraformers may increase the reach of terraform by 10 feet per level for “each point of burn it spends.” Okay, I don’t get what this is supposed to do. Usually, you “accept” burn and there is the burn cost of blasts etc…but “spending” it? Don’t get it. Is that meant to imply “for each point of burn accepted”? If so, before or after the reduction via terraforming? This is just a mess. It gets worse, since the 11th level ability is basically an “only in terraformed terrain” version of supercharge…which makes the whole burn management of the class even more of a clusterf***.

All in all, great concept, non-functional execution. On a more positive note, there are three different equipment pieces: The first would be an interstellar beacon that lets you use interplanetary teleport…and only costs 2,5 GP to create, which seems underpriced for such a cool, powerful option. Spore collectors allow verids to collect their spores as splash weapons…cool…but does e.g. the alchemist’s FCO-bonus apply to the collected spores? I assume so. Spore Launchers can propel these collected spore bombs at a longer range…but its format as a regular item as opposed to as a weapon seems odd to me: Why not codify the spore bombs and launcher as weapons?

I already mentioned one of the three new feats. The others let you add plant shape I – III to your spell list and the final one, Mi-Go Technologist, which allows you to create Mi-Go Technology based on two item creation feats whose minimum level prereq you fulfill, using Heal as the crafting skill and needing twice the GP to make the items. Very circumstantial, expensive…I don’t think we’ll see many PCs with that one.

The pdf also sports 4 new spells, with verdiform and mass verdiform being very precise buffs: They allow the targets to become somewhat plant-y, specifying the type of natural attacks they net, note deviations from the default damage-die sizes of these attacks, etc. Kudos! Corrupt Plants makes plants poisonous and bloated (neat idea!) and Alien Landscape affects an area, temporarily shaping it into a verid-friendly iteration of nature, which penalizes non-verid casters. That being said, the fact that the spell also renders the air impossible to breathe makes it VERY dangerous for the 5th level it is; suffocation rules are pretty nasty. Personally, I probably would have moved this spell up to 7th level.

The pdf also features 4 of the aforementioned plant companions: Living Topiary, Mushzoom[sic!] (yes, that’s intentional – 50 ft. base speed!), phantom fungus and shambler – these guys are powerful, but also pretty cool…so yeah. The pdf closes with a sample verid ranger 3. (It should also be noted that Deadly Garden 4’s Deadly Gardener-feat is reprinted for your convenience – a feat required to teach tricks to plant companions…which brings me to the final issue with this book: The racial trait of the verids that exchanges animal companions for plant companions does not specify that the verid gains the ability to teach tricks and Handle them…so do they have a semi-hidden feat-tax here…or should they gain this feat as a bonus feat?

Editing and formatting, on a formal level, are good – there are some typo-level glitches, but not too many. On a rules-level, though, the rules-language could have used some serious help. Layout adheres to Rusted Iron Games’ two-column full-color standard and the pdf sports awesome, original pieces of full-color artwork and is fully bookmarked for your convenience.

Jacob W. Michaels’ Verids are an intriguing race and I *really* like their premise, the way they stand apart from all the other plant-races. But oh boy, the pdf needs serious fixing. The race itself is VERY strong and not suitable for any but the more high-powered games, clocking in beyond aasimars and tieflings in potency. The crunch itself varies in quality – the ideas are awesome, but the value of the pieces of crunch is swingy: From the alternate racial traits to the FCOs and the undervalued feats (+2 uses of racial 1/day ability that is pretty weak for a feat?), the rules-language and balancing of options could have used a capable developer. The kineticist archetype, while cool in theme, is alas, non-functional. The spells are pretty much the best component apart from the fluff, but as a whole, they can’t save this pdf. With the glitches accumulating like that, I unfortunately can’t rate this higher than 2.5 stars, and though I’m very sorry for the cool concept, I can’t round this up in light of the other plant-race pdfs I’ve analyzed.

You can get this inexpensive, if not perfect pdf here on OBS and here on tabletoplibrary.com!