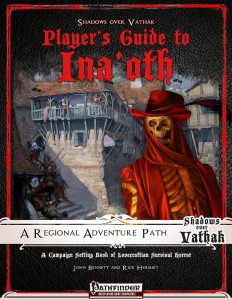 The second Player’s Guide to the disturbing regions of the Shadows over Vathak setting clocks in at 34 pages, 1 page front cover, 1 page editorial, 1 page ToC, 1 page SRD, 1 page advertisement, leaving us with 29 pages of content, so let’s take a look!

After an excerpt from the journal of Yarick Eastermann – which, as another, handout-style piece of parchment elucidates, is not in as happy a state as he should be. After a brief introduction for players, we get to know Ina’oth – situated at the southwestern corner of the continent, is protected by the Black Sky mountains…isolated, one could say. Before madness came upon the Bhriota, they settled, breeding with the romni stock – and, in fact, Ina’oth may almost seem like a paradise, compared to other regions of Vathak. The land has seen its fair share of death, though, and as the vindari enacted the genocidal “great cleansing” in the name of their One True God, the land took a breath; of particularly foul miasma, for the Plague of Shadows eliminated 2/3rds of the population, leaving plague villages and ghost towns behind, only to abate 13 years ago…though its specter remains, as bhriota once again rally and quarantine and xenophobia remain…after all, every stranger could bring a new strain of the horrific pestilence that almost ended these lands…

The pdf goes on to pose questions that help players with the character creation in the context of Vathak, while also explaining the mindset regarding death and disease in general. The pdf then goes on to explain the details of places of interest – the settlements of Ina’oth, for example – with notes on approximate population, but without SPOILERS. After all, Auld’s efficient death squads that hunt the diseased are a known fact there…Beyond these flecks of fragile civilization, the majestic landscape and its most commonly known legends are detailed next – from aforementioned mountains to the ruins that remain of Redfort. A total of 11 complex whispers and rumors you may have heard can also be found herein -and whether as red herrings, background knowledge or material for the GM to develop, they are great.

A total of 15 traits, correctly associated with their respective trait-subtypes (you’d be surprised how many files get them wrong…) can be found in the book…and they are awesome. Beyond the usual minor bonuses (with correct type!), always with some neat prose, they also have some very unique ones: 1/week acting in a surprise round as though you weren’t surprised,, since the spirits warned you? That may well be the difference between life and death, with the restriction helping to balance it and damn cool fluff as well. Better healing capacities for devotees of the One True God, lingering madness that increases the DC of your mind-affecting spells (but at what price in the future??), being the friend of a priest…the traits are flavorful, unique and actually for once do their originally intended job: Facilitate roleplaying from the get-go.

The book also features a total of 6 feats: One renders you immune to exactly one disease (more important in a horror context…at least if the GM doesn’t suck), temporarily granting bonuses to fort-saves to those affected by your channel energy, better social skills with the undead and a chance to live longer when reduced to negative hit points – all fitting, power-wise okay and flavorful as choices. The pdf also sports two metamagic feats: One allows you to add fear-based effects to spells and the other allows the undead you create to spread plagues – both are precisely crafted and solid, though, in an odd and purely aesthetic glitch, the second half of the latter feat seems to have slightly bolder letters – not fully bolded, though.

Now lineage feats have pretty much been one of the coolest things to come out of the new SoV-books from a mechanical point of view. Well, guess what? We get a new lineage, namely spirit. In case you didn’t know: These basically grant you the wonderful roleplaying gold (and damn cool character option) of having a bloodline of power…which also comes with a curse. When you embrace your lineage via these feats, your power increases…but you also pay a price. The spirit lineage here can be likened a bit to the ghost-haunted Godefroy of Ravenloft, with a stronger emphasis on becoming more ghost-like (including, at the end, incorporeal stints). Two thumbs up – great for the horror context!4 types of cool, mechanically viable incenses can also be found in this book…and yes, they are very cool: There is, for example, one that makes it much easier for the consumer to perceive invisible creatures…

The magic items introduced in the book feature a flair of talismans and resound with lesser folkloristic traditions and lore – necklaces from corpse hair supposedly keep the living dead at bay; consuming ghoul teeth may delay the frequency of ghoul fever, granting you precious time; murderer’s hands can continue to draw blood even after the demise of the killer (add bleed damage to attacks a limited number of times per day) and skin masks, a staple not only since Skinsaw murders, help you navigate the living dead…and animate them. Candles containing the toe and nail clippings of a hanged thief can help you outline secret doors and valuables…the items breathe a sense of the occult, of the twisted and make for perfect additions to horror and dark fantasy games. Two weapon special properties, maddening and penetrating are both aptly priced at +2 and welcome addition to the arsenal of PCs.

A total of 7 spells are next – with spectral hands attempting to drag targets to hell, the level 9 druid forest fire, the One True God’s Hoy Word (perhaps not perfectly named) causing sinners to bleed from their orifices, Fortitude-enhancers, permanent aging (appropriate for a horror game!) and snakes of water, the visuals of the spells are great and their position within the spell-levels well chosen. No complaints whatsoever. The pdf also provides the Ancestral Armaments incantation, a ritual that binds bloodthirsty spirits into spectral weapons that guard you or attack other creatures…but, as always, failure to perform the ritual properly comes at a price…

The pdf also sports a new archetype, the Hellfire Evangelist, who only gets one domain, but may also choose Fire. As a full-round action, these preachers may use channel energy to bolster their silver tongues, converting the unbelievers. The rules for this signature abilities for this roleplaying heavy archetype are rock solid and it can easily be combined with other archetypes. Two thumbs up!

The pdf has one final, meaty section: The Plague Mage PrC. The PrC needs to be able to cast 3rd level arcane spells, is pretty easy to qualify for, gets d6 HD, 1/2 BAB-progression, 1/2 Fort-progression (interesting choice!) and full spellcasting progression, but only 2 + Int-mod skills per level. At 1st level, these beings can sacrifice spell slots of 3rd level or higher to spontaneously convert the spell into remove disease and they may prepare that spell without a spell book…however, here’s the catch: The disease is cured as usual…and transferred to the plague mage. If he makes his save, the disease is stored within him and can be transferred to victims with a mere touch, ignoring onset time. 2nd and 7th level increase the DCs of such diseases (and spells et al. dealing in them) by +2/+4, respectively. Starting at 3rd level, the plague mage may lace carried diseases into his ranged touch spells. At 8th level, plague mages may expend spells to deal physical attribute damage to foes a ta mere touch. Finally, as a capstone, the plague mage may lace diseases into cone- and radius AOE-spells. Both PrC and archetype come with roleplaying tips.

Editing and formatting are top-notch. I noticed not a single relevant hiccup in either formal or rules-language. Layout adheres to Fat Goblin Games’ full-color two-column standard and the pdf features a lot of stunning artworks I haven’t seen before. This is a beautiful book. The pdf comes fully bookmarked for your convenience.

John Bennett’s Player’s Guide to Ina’oth is basically the perfect horror gaming player’s guide; the book offers flavorful options that marry a crunch functionality with a LOT of roleplaying potential. The focus here is not to engage in the min-max-mathfinder game; it’s to tell stories of unique and captivating characters in a rather disturbing land. This is a book for the roleplayers and horror-aficionados. Crunch is precise and well-priced for horror games and the quality of the prose is excellent. Beyond that, the book manages to paint a vivid picture of the region without spoiling crucial truths t the players – not even between its lines. Even more so than the colonies, this one is simply superbly written, fun and truly evocative.

The last time I have read a regional sourcebook I enjoyed reading this much was a long time ago. When even paltry little traits offer cool options and you can practically see the modules coming, the creativity blazing forth…well, then you certainly realize that you stumbled over something awesome. This book, in short, is absolutely excellent, evocative and inspiring. 5 stars + seal of approval, given sans any inkling of doubt or hesitation. Fans of horror and dark fantasy should consider this a must-have addition to their library. (Yes, my fellow Ravenloft-fans – that includes you; this is the best regional sourcebook for the genre I have read since the end of the Doomsday gazetteers.) Oh, and if you want a module that thematically fits with the more savage and less sophisticated components of Ina’oth – may I suggest adapting TPK Games’ “The Reaping Stone“? It hits the right notes and is sufficiently brutal…

You can get this awesome, flavorful player’s guide/sourcebook here on OBS!