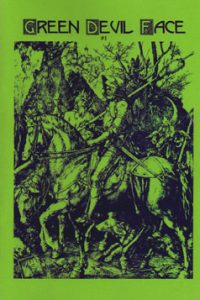 The first installment of the Green Devil Face magazine clocks in at 21 pages, 1 page editorial/introduction, leaving 20 pages of content – and in case you were wondering: The cover etc. is its own pdf contained in the folder.

So, what is this? As the author tells us, this was originally a project called “Fantasy Fucking Vietnam”; it is, unlike what most people will associate with Lamentations of the Flame Princess, obviously and very intentionally a satire…and it is a massive module…a dungeon, to be more precise. 59 rooms strong and ready to rock for OSR-games. There is no key-less, player-friendly version of the b/w-map, but considering the price-point, I am okay with that…oh, and considering the fact that this works rather well as a scavenging toolkit, considering the absence of monster stats within.

This being an adventure-review, the following contains SPOILERS. Potential players should jump to the conclusions, if only to not spoil the ideas rather than the plot.

Well, there’s not much lost in spoiling the plot. The village of Erephs-Ogolb used to worship the mad mage with the D’footians, a fellow tribe. Now the D’footians have claimed the shrine for themselves! PCs to the rescue, after all, backwater tribes should be able to worship any Mad Mage they want!

All right, story out of the way, there’s a 2d6 random encounter/trap table which features D’footians and traps standards like pits and wires. Things become weird from the get-go: To enter, you have to insert a gold coin in a turnstile, as a D’footian in a superhero costume looks…oh, and the turnstile can malfucntion and throttle you. How? No idea, but the imagery is downright bonkers in a good way. In an amphitheater, D’footians play “The Importance of Being Ernest”, which OBVIOUSLY is a dramatization of the Mad Mage’s life. Interesting, lethal and hilarious – if the players answer “I don’t know” to any of the befuddling questions potentially asked there, a green slime will be dropped on them. Yeah, Monty Python and Wilde reference in one encounter. Told you this was gonna be funny!

Teleportation via the vaguely creepy eponymous Green Devil’s Face is surprisingly non-lethal…but open the wrong hatch in the wrong funny-smelling tunnel and you may well create a roaring inferno. A studio that contains a paranoia-inducer (surely there must be a petrifying monster around!) and the friendly wererat physician Dr. Gerbil should further emphasize how bonkers this place is.

Players who haven’t learned that randomly drinking potions in alchemist’s labs may find out than 20 entries include gaining extra arms or sweat that is flammable may be just some of the effects (and gaining XP in exchange for needing to wear glasses should also be mentioned). Oh, and there is a huge treasure pile! Of copper coins. Painted platinum. Why? I don’t care…but it’s pretty funny. Similarly, the oracle’s den basically provides satirical comments on the history of RPGs rather than any succinct in-game help. There also is a scribe, obviously a self-insert that shows a nice bit of self-depreciating humor, which permanently slowed quill and a propensity to write rude things about adventurers. Doors labeled “3tards and “4ons” and weird prisoners can be found. And there is the empty room. You know THE empty room. Which actually can disintegrate anyone foolish enough to stay inside for too long…that’ll teach the players to camp in featureless, unimportant nondescript rooms…Ha!

Mirror halls with doppelgangers are pretty neat as well and the PCs can encounter pretty friendly illithids sunning in the glow of magma alongside weirdo, long-haired kids that frolic around near the magma fields. Troll lords, cursed books, the architect Spike Pearls (lol), killer bunnies, yellow liquid that heals, but has a urine-aftertaste, a freezer, a functional bar with an animated keg that provides a sadistic twist on the old “one lies, one tells the truth”-puzzle. Once a patron passes out, the PCs are basically transported to the Vietnam, as they are temporarily drawn into the drunken stupor of another patron…

Oh, have I mentioned the dressing screen that can suck you right in or the enchanted bunny slippers with a blinking nose that render you 100% silent, but unable to hide? The game room that lets you bowl, play pool or chess? The lethal game of questions to receive a wish from the Mad Mage? Or the existence of the semi-lich, just to drive home that you shouldn’t play with dead things?

Editing and formatting are pretty good. I noticed some minor hiccups, but nothing glaring. Layout adheres to a no-frills-one-column b/w-standard and the cartography similarly is functional, but sans frills. The pdf, surprisingly, comes fully bookmarked with bookmarks for each room, which is neat indeed. As a nice courtesy to European gamers, we get an A4-optimized version to come along with the letterpack-optimized version for the US market. Neat!

James Edward Raggi IV’s first green Devil Face is hilarious, if you like gaming meta-humor and have players that can take a joke. Where else can you walk out of an illusionary Vietnam scenario with rocket launchers (that evaporate once the illusion’s gone…but the damage is pretty real!) and enjoy a balls to the wall weird, funny and challenging module? Seriously, LotFP is known for the dark and horrific elements, but the people who overlook the satirical elements in quite a few of their books or talk them down should look no further than this: This is NOT subtle, but it can be a pretty funny experience to run PCs through this lethal dungeon, particularly if they know about the history of RPGs and *get* all the nods. This is not just a selection of random weirdness, though – there is a method to the madness here and the pdf works pretty well as a nice one-shot dungeon to laugh, game and see PCs die the most ridiculous deaths in – yes, it’s hard. But it is worth trying. And it is ridiculously inexpensive.

This may not be perfect by any stretch of the word, but it is worth checking out. Hence, my final verdict will clock in at 4 stars…fans of the odd, funny and weird (like e.g. Crimson Dragon Slayer) should most definitely take a look!

You can get this inexpensive, bonkers dungeon here on OBS!