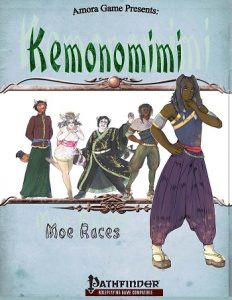 “When the kami placed their thumbprint unto the forehead of man, bretahing life into the husks of flesh, they wept tears of sorrow. Looking upon their children playing upon the ground, rolling in the fields of grass and running alone through lush tracks of wilderness, the Kami felt the hollowness of the human heartbeat, thumping alone.” This is the beginning of the legend that talks of the creation of the kemonomimi, and it is but the beginning of a rather flavorful origin-myth, which is subsequently enhanced via age, height and weight tables before diving into the respective races.

Each of the racial write-ups comes with information on physical descriptions of the races, their society, relations, alignment and religion and adventurers as well as with, obviously, racial traits. However, beyond these, neither favored class options nor racial feats or traits are provided, making the depiction in each case rather minimalistic. On an aesthetically positive note, each of the races does come with one or two original piece of full-color artwork (exceptions: Fox and Tanuki-based races…but then again, for the former, Everyman Gaming’s numerous Kitsune-artworks should do the trick). All of the races share the kemonomimi subtype and are humanoids, in case you were wondering.

The red panda-based Akaimimi get +2 Con and Wis, low-light vision, +2 racial bonus to Knowledge checks, +4 to Handle Animal and Wild Empathy-checks made to influence red pandas and similar creatures and 1/day augury as a SP (on a nitpicky aside: Not properly italicized). Interesting: The SP can be cast by akaimimi with ki pool (also not italicized, but then, italicizing ki never made sense to me) additional times by expending ki. At 10th level, they also unlock 1/week divination.

The raccoon-based Araiguma get +2 Con and Int, low-light vision, +2 to Disable Device and Sleight of Hand, the same Handle Animal/wild empathy-bonus to influence raccoon-ish creatures and they can use dowsing to lead them to fresh water; By washing food (but not water), they can purify it…which is pretty clever and cool as an idea!

Inumimi, based on dogs, gain +2 Str and Wis, low-light vision, Handle Animal/wild empathy affinity with canine creatures, +2 to Handle Animals and Survival and they are resilient against curses, gaining a +2 bonus to saves against them. This bonus extends to adjacent allies, though multiple such bonuses do not stack. Nice one!

Kitsunemimi, obviously based on foxes, get +2 Dex and Int, low-light vision, +2 to Perception and Sense Motive, fox affinity and a +1 bonus whenever they take 10, +2 when they take 20. Again, a unique racial ability. Basically, think of these guys as more down-to-earth fox folk that work well in campaigns where kitsune are a bit too much.

Nekomimi, based on cats, gain +2 Dex and Cha, low-light vision, +2 to Climb and Perception, cat affinity and may reroll a single die roll 1/day, thanks to their luck. Nice variant of the catfolk trope!

The tanukimimi, based on the tanuki, gain +2 Con and Cha, low-light vision, +2 to Survival and Stealth, tanuki affinity and can gain, 1/day as a swift action, temporary hit points equal to their character level + Constitution bonus (EDIT: The author has contacted me and told me that the pdf’s “bonus” is indeed intended here instead of the more common “modifier” – which is pretty rare, but not unknown. So, negative Con-mod is not applied here. Just fyi!) – these last for 1 hour. Neat one!

Finally, the Usagimimi, the harefolk, gain +2 Dex and Wis, low-light vision, +2 to Craft and Profession checks, hare affinity and they gain +1 to atk and skill checks (not rolls) with weapons, tools and vehicles they crafted as well as +1 CL when using scrolls and potions they made. They also reduce the armor check penalty of armors they crafted by 1 and increase the earnings of Perform and Profession by 10%.

Editing and formatting are very good. On a formal level, there is nothing grievous to complain, and while on the rules-level there are very minor deviations from the standard rules-language, these do, in no way compromise the integrity of the rules. Layout adheres to a full-color two-column standard with colored petal-like elements at the corners and, as mentioned before, a surprising amount of nice, full-color artwork. The pdf has no bookmarks, but does not need them at this length.

Wojciech Gruchala and Greg LaRose’s kemonomimi races were a surprise for me. You know, I’m not the biggest fan of anthro races and I’ve seen quite a lot of them. Most of the time, or at least often enough, they either are lopsided, studded with “OMG, look how KEWL my athro is11!!”-arrays of abilities or the like.

This book is not like that. There is the old design adage of KISS – and this pdf very much is the application of it. The fluff is neat; the races, however, manage an interesting feat: They aren’t boring. They are not jam-packed with skill-bonuses to x or z, instead, much like the fluff around them, exhibiting a Zen-like design-aesthetic. It simply does not take much to many abilities to make a unique race, just one good and unique one – and (almost) each of these has just that. Where many races I see are cobbled together from the pieces of the ARG, these guys all have their own, distinct trick that sets them apart and makes sense within the context of their respective fluff.

Suffice to say, I’d allow each of these races in any of my games; even in CORE-only games, these guys will not unhinge the game’s balance…and they still feel distinct as races. I really like this racial design philosophy. To make this abundantly clear – in spite of not being too into the subject matter, I found myself intrigued and wanted to know more about these folks. Which brings me to the one detriment of this book – its brevity. The lack of favored class options, race traits, alternate racial traits and the like is the one downside of this very economically-priced supplement. It should also be considered to be the only reason this does not score higher than it does. The races per se are neat indeed and warrant a final verdict of 4 stars.

You can get these races here on OBS!