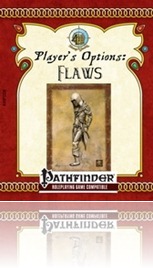 The basic idea behind flaws is both iconic and neat – characters in literature have long been defined by their flaws as well as by their strengths and this pdf focuses on offering the option of flaws for PCs. Essentially, you take them at first level and every character can take up to two flaws, either gaining 3 skill points or a bonus-feat per flaw taken. You may only gain one bonus feat via flaws, though.

Overcoming said flaws is also a trope of literature and thus, each flaw comes with a condition that lets the PC get rid of it – from investing attribute-gains in a certain way, taking specific feats and learning skills, the conditions vary and usually are easy to meet, if you so choose. However, you have to get rid of the flaw as soon as possible or keep it.

Which brings me to a central point – I consider flaws to be quite central to a character’s development, after all, no one is perfect and personally, I’d make getting rid of flaws more difficult, but that’s just me.

If I haven’t miscounted, we get 49 flaws for your perusal, which range from absent-mindedness and being an albino, to partial and total deafness and similar physical problems. While the latter can often be cured with magic, I’d house-rule that to be not an option – getting rid of a flaw should be more than paying the local priest a bunch of GP or turning to your cleric-buddy. I do understand, though, that as designers these options have to be taken into account and assumed as the default of dealing with handicaps like that.

Editing and formatting are top-notch, I didn’t notice any glitches. Layout adheres to the clear and easy to read two-column standard and the pdf has bookmarks, though not many. The sparse artwork is ok for the low price. I really like the concept of flaws and how they also define a character and the angle of gaining strength/overcoming one’s weaknesses, but in the end I felt like something was missing here – perhaps alternate criteria to get rid of flaws, some way to expand upon them (perhaps via feats that require flaws?) or similar material. Also, I do consider the flaws to be unbalanced among themselves, i.e. some flaws are much more severe and/or harder to get rid of – asthma being quite a difficult condition to adventure with, for example. A kind of magic inhaler as a little wondrous item would have made a great supplemental material, just to give an example.

I hope the concept will be expanded upon in a future release, but for now and on its own, I consider this cheap pdf to be a good buy if the concept even remotely intrigues you. My final verdict will be 4 stars.

Player’s Options: Flaws is available from: