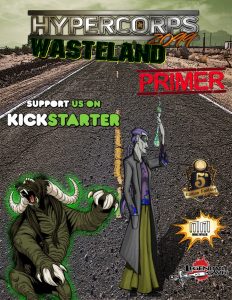 This free primer for the Hypercorps 2099 post-apocalyptic book clocks in at 13 pages, 1 page front cover, 1 page editorial, 1 page SRD, leaving us with 10 pages of content, so let’s take a look!

The pdf begins with a new primal path for the barbarian, the radraider: At 3rd level, these guys become immune to radiation while raging and 6th level nets immunity to the poisoned condition as well as resistance to poison damage. Additionally, it lets you suspend the charmed or frightened conditions for the duration of a rage entered. At 10th level, as long as you have an irradiation score of 7+, you can detonate as an action, inflicting 2d4 fire and radiant damage per point of proficiency bonus to all within 15 ft. As a minor nitpick, the ability does not specify its shape beyond “all within”, but that’s cosmetic. The powerful burst reduces your irradiation to 0 and nets exhaustion levels after finishing a rage, so just spamming this while irradiating yourself will kill you. 14th level allows for Constitution saves to potentially negate exhaustion thus incurred.

The next page provides 3 new backgrounds: Alien Abductee, Shlter Captain and Shelter Dweller -all generally are solid, though none feature the extenisve goals etc. tables…at least herein. Two of them btw. tie into the Luck and Reputation ability scores introduced in Hypercorps 2099 – and fyi: The author told me that all pertaining information will be in the finished book, so no, you do not need Hypercorps 2099 to make use of these.

3 items can be found here as well, from the iodine pill to geiger counter and lead-lined backpack. The system also introduces the Science and Technology skills, both of which are tied to Intelligence. The skills note which classes add them and which backgrounds may replace one they offer with these.

Radiation rules can also be found herein, with 11 levels of radiation provides, with progressively more volatile influences: And magic does not take well to magic. The table is pretty cool and useful and certainly warrants downloading the pdf as a nice piece of hazard material, even if you do not plan on using the totality of the book.

Speaking of radiation: The book does provide the cliff notes version of the irradiated attribute: This special attribute starts at 0 and is increased by exposure, decreased by staying away from radiation for 1 week. Radiation makes you more resilient to magic, but also has the damage (or perk) of potentially aligning you with a forced progression in a freak class (pretty interested to see that in play!) and cause all matter of unpleasantness.

The pdf also features new critters: Brain Slug and the slug-brained template will make fans of Futurama chuckle with glee; a sample wastelander afflicted is btw. also included. Similarly, the irradiated template and the sample bear included are interesting. The purple people eater plant is irradiated nightmare fodder…and yep, there’s a walker. Think of these as fast rage zombies. Ouch. These include racial traits, since exposure to a ton of radiation may cause you to become one, but, as a whole, they look VERY strong; I can’t judge on whether they work out in the context of the book or not balance-wise, but I’d strongly discourage non-Hypercrops 2099 Wasteland-rounds to allow this one: It has a ton of resistances and immunities.

Editing and formatting are pretty good. Layout adheres to a mix of one-column and 2-column full-color standards and the pdf sports a solid mixture of stock and original art. From an aesthetic point of view, layout is very busy – but whether you like that or not is a matter of taste. The pdf has no bookmarks, which constitutes a minor comfort detriment.

Mike Myler’s Wasteland Primer is better than that for the first Hypercorps book; while I cannot judge the balance of the components adequately until the final book is released, this one actually does have content to scavenge and entice; even without using the book, the radiation table makes for a cool hazard to implement. That and the critters make sure that you get your time’s worth for downloading the file, even if you don’t end up using it. This is a well-crafted teaser, considerate of the downloading gamer while showcasing several aspects that may cause you to take a closer look – and considering that it’s FREE, I will hence settle on a final verdict of 5 stars – download it, take a look and if you like what you see, support the KS.

You can get this teaser for FREE here on OBS!

You can check out the KS here!