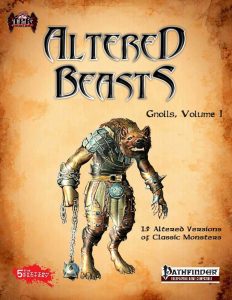 On a formal level, it should be noted that in 5e, features of critters are usually bolded and italicized – the pdf does not feature the italicization. A big plus as far as I’m concerned would be that the respective alternate gnolls featured herein do get signature abilities to set them apart. While this is one of the strong suits of the pdf, it also represents, unfortunately, one of the points where the pdf could have used a bit of refinement. Take the gnoll whelp’s cowardly retreat ability in 5e: When the gnoll is reduced to 0 hit points, it must make a Dexterity saving throw (“Dex save” herein) – if successful, the whelp “…instead has 1 hp and must move its full movement to exit combat.” Immediately? As a reaction? On its next turn? No idea.

In the PFRPG-statblocks, such instances can also be found: The CR 1 Crazed Gnoll Howler has the following ability: “Insane (Ex) Creature is psychotic.”[sic!] – Yeah, this is no rules-language I know of. On the plus-side: The 5e-version gets an ability quite akin to the one sported by the whelp done right – and it better should be, for it is an ability you can find in most of the statblocks. On the down-side: These critters come with a disease – which instantly kills the PC after 3 failed saves. OUCH!

Pygmy gnolls, also at CR 1, are ranged combatants; ravenous gnolls (CR 1) can regain hit points via bites in 5e. In PFRPG, they gain a bonus to damage and attack when fighting “potential prey” – whatever THAT’s supposed to mean. Lower HD? CR? Everything? No idea. The classic flind does NOT get any stats, just telling the GM to apply the Advanced Simple template. Which does not account for flind-bars etc. Oh, and 5e? No dice. No flind-stats either. Disappointing.

The pdf also contains a total of 4 different CR 2 gnoll variants: The winter gnoll is immune to cold and, in PFRPG, vulnerable to fire (oddly not in 5e). Speaking of 5e – these guys can throw basically bear traps – and these do NOT allow for a save to avoid them: If you walk into them, you’ll be hit. Problem: The ability doesn’t specify what type of action the gnoll needs to throw it: I assume a regular Action, but bonus action would make sense as well. Also problematic: No duration or rest-interval or recharge note. RAW, they can throw an infinite amount of traps. Cave gnolls suffer from light blindness, but are potent throwbacks. The 5e-version gets the Multiattack formatting wrong, making use of the attacks needlessly confusing.

Gnoll mercenaries are lame warriors 2 in PFRPG and not much more interesting in 5e. Mutant gnolls come with a wasting disease in PFRPG as well as DR 5/cold iron (and errors in the stats), while the 5e-version gains some cool defensive tricks.

There are 3 different CR 3 gnolls: The rageborn has the pack attack feat and some Barbarian tricks and raging 5e-versions are particularly defensive while in rage. Weird: Their rage has no duration. The CR 3 two-headed gnoll has this gem of an ability: “Improved Multiple Attacks: The two-headed gnoll never takes penalties from making multiple attacks.” – yeah, PFRPG rules-language this is not. Puzzling, since PFRPG des have well-threaded rules for the like. Speaking of which: In 5e, we get this: “The two-headed gnoll may roll two dice (keeping the best one) on all Perception checks and on saves versus blindness, charm, deafness, fear, stunning or becoming unconscious.” Spot the deviations from how that ability works. Hint: There is a concept called advantage and the wording for the conditions is weird as well…and the ability has already been cleanly codified. Plague bearers also sport some nonstandard verbiage and fail to specify in PFRPG, to which of their two plagues the DC applies – one save? Two saves? Do targets have to save once or twice? The 5e-version notes a disease cloud, but the disease-effects are weird.

At CR 4, we get the giant-blooded gnoll, who gains rock throwing in PFRPG – and displays an ignorance on how the damn universal monster ability works. The statblock’s wrong. This would be as well a place as any to note that the alignment/type formatting line is improperly formatted in all 5e-statblocks. Compared to this fellow’s massive damage output, the den mother at the same CR pales and falls behind quite seriously – she also lacks any unique tricks in PFRPG. In 5e, her spellcasting section deviates from standard presentation.

At CR 7 we get a demon-possessed gnoll, at CR 8 a gnoll warchief. As you can imagine, neither possession, nor other ability formatting specifics are 100% okay in either of them, making running them more complicated than it should be. The 5e-version of the demon-possessed one notes “negative energy damage”, which does not exist in 5e, and uses PFRPG-y summon mechanics. The summary of Jaguar Pounce manages to be incorrect.

The pdf also sports a significant array of monstrous feats, but only for PFRPG. They…suck. Okay, there is no way past that. There are minor number-boosts, boring benefits, wonky wordings, critical escalations…you get the idea. And no, the feats were not used in the builds, feeling like a weird afterthought.

Editing and formatting are okay on a formal level. On a rules-language level, the pdf fails both systems, big time. Neither PFRPG, nor 5e sport the level of precision either system deserves. Layout adheres to a solid two-column full-color standard and the pdf has no interior artworks. Annoying: The “o”s in the font seem to be larger than the other letters. Really looks odd. The pdf comes fully bookmarked for your convenience.

Brian Berg can do better. He has done better. Orlando Winters as an additional author hasn’t helped the pdf either, unfortunately. I hate to say this, as I do like this type of book – NPC codices are cool and while the dual-system format makes you pay for a system you don’t use, if the variant gnolls herein would live up to their ideas, it’d be a nice book. However, there s no way past it – everything herein feels sloppy and rushed. There are plenty of formatting issues, rules-language hiccups and deviations, statblock glitches etc. in this pdf – and in a crunchy monster book, that’s just not good. No matter the system you employ, you’ll get a deeply flawed book here, one that displays puzzling levels of ignorance regarding the mechanic aspects of both systems. I would have expected this from a novice, not a veteran. As a whole, I cannot recommend this pdf to anyone, but the most tolerant of GMs. Hence, my final verdict will clock in at 1.5 stars, rounded barely up for the purpose of this platform.

You can get it also as part of bundle that contains some gems here!