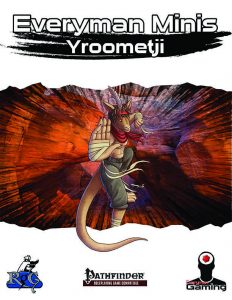 This revised installment of the Everyman Minis-series clocks in at 11 pages, 1 page front cover, 1 page editorial, 2 pages of SRD, 1 page advertisement, leaving us with 6 pages of content, so let’s take a look!

This review was moved up in my review-queue as a prioritized review. Furthermore, I received an advance copy in order to have the review done on release day.

So, what are the Yroometji? Kangaroo-folk. They gain +2 Con and Cha, -2 Int, are Medium, get low-light vision, +2 to Acrobatics made to jump (and are always treated as having a running start, +1 natural AC and a natural slam attack (cosmetic complaint – you need to resort to default – it does not specify being primary or secondary) at 1d4 bludgeoning and piercing damage and a crit-range of 19-20 when using their feet, or 1d6 bludgeoning damage with the tail. Readied attacks with the tail deal double damage versus charges, as though it had the brace quality. Additionally, they have a pouch that can hold up to 1 cubic foot volume or 10 pounds and if no armor or clothing restricts access to the pouch, transference of an item to or from it requires a swift or move action. Armor that grants pouch access costs slightly more and what constitutes restrictions to pouch access is concisely defined. All in all a solid race that should not provide any problems, regardless of campaign tone or power-level.

Now, as has become the tradition with Everyman Gaming’s take on races, this is not where we leave off – the yroometji depicted here are more than what you’d usually expect, with notes on physical descriptions, life cycles, cultures, religion, etc. all being depicted in surprising and neat depth for a pdf of this size. Favored class options for brawler, skald, shaman and druid have been included.

Speaking of brawler: The first of the racial archetypes within this pdf would be the Five-Strike Slugger for yroometji brawlers. These guys reduce their proficiency regarding weapons to simple weapons and may not use monk or close weapons as part of their flurries, but may use their slam attack in conjunction with it and also deliver abilities that require unarmed strike use with it. Nice: Instead of maneuver training, these guys can choose combat or psychological maneuvers from a list and add them to the effects of slam attacks, with 3rd level unlocking the first of these and every 4th level thereafter providing a new one. This ties in with the ability that replaces weapon mastery, namely to gain an unarmed strike or slam attack at full BAB minus 5 after affecting a target with a psychological or combat maneuver. And no, it can’t be abused in combination with flurries or the free maneuver added to slam attacks, thanks to an explicit piece of rules-language.

The second archetype would be the ancestral hunter for, bingo, the hunter class. Instead of animal focus, these hunters get to choose from a wide array of spirit foci, ranging from knowing the way to communication, blur, etc. – 8th and 15th level provide upgrades for the spirit choices. 3rd level yields the shaman shapeshift hey, with minutes of spirit aspect being usable to shapeshift, but nice vice versa. Additionally, the companion may be thus transformed into a Medium or Small humanoid while under the effects of spirit aspect. This replaces the bonus feat gained at 3rd level. Flavorful and interesting, rather cool tweak of the hunter class!

The race also comes with a 2-feat mini-feat tree based on Vital Strike: hop on the tail and execute a particularly potent feat slam, with Acrobatics acting as a means to increase damage – but thankfully capping via the weapon damage dice rolled. pretty interesting -while I’m usually not a big fan of this type of feats, it does work rather well here. The follow-up feat, Disembowling Kick, adds Con bleed to such assaults – ouch!

Really cool would be the 2 spells included: Handy pouch makes your pouch act as a variant handy haversack and pouch ally lets you shrink down allies and carry them in your pouch! Amazing!

Editing and formatting are top-notch on both a formal and rules-language level. Layout adheres to Everyman Gaming’s two-column b/w-standard and the pdf features a neat full-color artwork. The pre-release copy I have has no bookmarks, but needs none at this length.

Alexander Augunas’ yroometji are actually a mechanically interesting race that also comes with an interesting flavor and theme; I haven’t seen the kangaroo folk done well before and the visuals of the race are compelling, juggling complex concepts. The spells in particular are gold and I really like the race – in fact, I like it so much I hope it’ll get full Compendium treatment with details galore on these unique fellow and their culture.

The revised version of this pdf now also includes the vital statistics, catapulting this to 5 star + seal of approval territory!