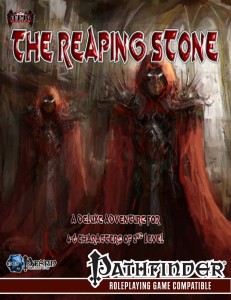 This massive mega-adventure clocks in at 206 pages, 1 page front cover, 1 page editorial, 2 pages of ToC, 1 page advertisement and 2/3 of a page SRD, which leaves one with a massive 201 1/3 pages of content, so let’s take a look, shall we?

All right, still here? Set in the metropolis of Maerh Varza (which comes detailed in a short appendix and with a full statblock), the PCs begin this module in a tavern of all places – and are dumped right into the action, as deadly adversaries enter the tavern and drop a vial – one, as it turns out, of many simultaneous strikes throughout the city, the contents spread a deadly magical plague that resists curing – the Reaping Sickness. Where did this come from? Well, once upon a time a good king got rid of a deadly cult of fertility and disease worshipping the dread queen of rot Maramaga – his men slew the cult’s members and all associates. Alas, they also slew the family and friends of one of the most powerful cultists (hey, evil cultists can have families as well, right?), who then turned towards an excessive plan for blood, death and vengeance.

Following the cultist’s trail through wererat-infested sewers (whether to find a cure due to being infected or to prevent a plague zombie apocalypse…), the PCs will find the operation place, from where the simultaneous strikes were  -launched: The burnt-out remnants of a haunted orphanage, burdened by dread tragedies of crimes past (including great terrain hazards and haunts) not only conceal some cultists, the PCs will also have a chance to lay the dread spirits of the place to rest and even save one particularly foolhardy child from certain demise/madness. From here on, the PCs will also encounter the first of the numerous skeletal champions spellcaster from a sisterhood of undead skeletal spellcasters aligned with Maramaga’s cult. Conveniently, the cultists have a map including a safe house noted down – at least for me, that hits a pet-peeve – any villain with an Int of >8 does not get such papers in my campaigns…

While the other plague strikes could be explored by the PCs, the module more or less linearly leads them to aforementioned safe-house, a mortuary now under the control of the cult – via magic etc., the explicit details are rather well explained, which also brings me to a point I will further elaborate in the conclusion – this is very concisely written. The mortuary, including crematorium etc. once again drips details galore and from the hints gleaned here, the lead brings the PCs to essentially a desecrated paladin-come-saint’s shrine, which doubles as a final resting place for the dread remains of the undead that spawned from the paladin’s betrayers. Fighting through the undead-ridden catacombs, the PCs dive into the underdark, where they explore a gigantic cavern (including ruined, cursed dwarven ruins and a tower ablaze in hellfire) and fight or negotiate with a deadly dwarven dullahan to finally reach the ultimate stronghold of Maramaga’s cult.

The final dungeon is complex and sports not only deadly cultists, undead and vampires, it also delivers two deadly artifacts and perhaps the hardest climax I’ve seen in just about every commercial module – for once, the final battle would not require me amping up the challenge – this is a finale your players will remember for years to come, as multiple phase encounters, with magical terrain and deadly adversaries conspire to push even well-crafted PCs to the limit – at least if a DM has enforced them not being able to easily retreat throughout the module.

Among the appendices, we get all new monsters, a short write-up of Maramaga etc. It should also be noted that the module contains information to scale the encounters down to work for less than 6 players – nice!

Editing and formatting are good, but by far not perfect – room’s headers tend to miss apostrophes when requiring them and I noticed multiple instances of line breaks in the middle of sentences and similar minor glitches. The bookmarks are okay, though nested bookmarks for the respective areas would have made navigation more comfortable. My print copy has an issue with the second half of the book, with white paper near the binding and the text closer to the borders – something seems to have gone wrong on the printer’s end, at least with my copy. This won’t influence my verdict, though, since I can’t ascertain whether this is a unique problem or extends to all copies. The cartography by Richard A. Hunt per se is AWESOME, though the maps of smaller locations (at least in my copy) tend to be slightly pixelated in both print and pdf, with the grids partially being superimposed on the walls instead of being below them – the big maps are high-res and do not have this issue, though. Artwork is generally solid, original b/w-artwork. One final complaint regarding the maps – in almost all examples when the pdf mentions that a foe is on a specific locale on the map – don’t bother looking for the “x” or similar letter – they have been mostly forgotten – a rather unpleasant detriment.

Soooo, this module is very linear and does not kick off particularly enticing – a tavern, followed up by a sewer-level does not blow Endzeitgeist away…. Nor does the very linear storyline and structure allow for much deviations or excitement, essentially putting crawl back to back with crawl – this is a slugfest if there was one – however, that derogatory moniker does NOT fit “The Reaping Stone”.

Why? Tom Phillips. The author *GETS* horror and dark fantasy and what makes it tick – each trap, each of the numerous haunts and treasures, from hidden caches to buried corpses – all has a meaning, a story to be unearthed, rewarding exploration and curious players with multiple tidbits that make experiencing the challenges herein actually very fulfilling – the logical, often very tragic storylines herein border on grimdark and paint a vision of bleak desperation against truly abominable foes. Speaking of which – another bonus herein is that this module is HARD. TPK Games is not known for easy modules, and inexperienced players will have their severed, undead, plague-ridden buttocks handed to them – apart from the handicap of the plague (which your PCs WILL contract in one of the numerous chances throughout the module), we get smart foes that, while adhering to certain themes (which enforce an identity via e.g. the skeletal champion sisterhood), offer enough diversity to keep things interesting. The respective dungeons/locales are creepy, spooky and will challenge and creep out your players – when moaning sundered ones, silver-tongued sociopaths and headless dwarven lords attack, your players will be challenged indeed.

My favorites among the adversaries would be the multi-phase battles – for once, we get multi-phase fights, e.g. preceded by haunts or traps; Particularly the boss battles, with unique terrain, multiple phases and often downright BRUTAL challenges are simply glorious to behold and made me chuckle my most sadistic DM-grin – also thanks to most NPCs actually feeling very organic and coming with at least short background stories. This also extends to the monsters – thanks to various mutations, variations and the like of established creatures, the fights have a lot cool, small tidbits to offer  -and no, they don’t stop at old, obese dire rats or 3-tentacled otyugh-mutants… So combat-wise, this is GLORIOUS. The vast plethora of small stories, the atmosphere of the respective locales is excellent as well.

But the module also has its weaknesses: The one puzzle of the book is rather simple – but hey, one easy puzzle is better than none. My other issue would be pacing and meta-storyline. So we have an outbreak of a zombie-plague in a metropolis – an incurable zombie-plague, nonetheless! AWESOME!! But the module does next to nothing with it – when compared to e.g. “Seven Days to the Grave” or Necromancer Games’ 3.X plague-saga “Shades of Gray” (stop giggling – that was before a fanfic turned phenomena gave BDSM a bad name…) better moments, the sense of urgency is somewhat lost as PCs hurry from superbly crafted creepy vignette to vignette. There is next to no investigation, almost no chance to meaningfully use diplomacy (though more often than in several crawls I’ve read) and the threat to the city remains an opaque one – don’t expect your players to experience mounting unrest, chaos, quarantine or the like in the city. No looters, no doom-speakers…and hence, the terror of the plague loses some of its gravitas.

Essentially, the PCs have a clear task and no timeline adds urgency to the plot. In fact, one of my issues is that, if you enjoy non-instantaneous level-up, this won’t work: Your PCs are assumed to level as they go – which wouldn’t be too bad, but in the combination with the lack of consequences for dawdling, that takes away from the threat of the adversaries and their vile plan- their plague-gambit essentially waits for the PCs to stop it. Maybe it’s just me, but I was thinking that a sense of constant urgency, with consequences for each retreat, each resting, could have made this module a truly nailbiting, legendary experience.

So how to rate this? Oh boy, this is HARD – one the one hand I absolutely LOVE each and every locale herein – they’re creepy, dark, logical and made me grin all the time – and then they’re over, suddenly, the meta-plot’s flimsy premise ripped me right out of it and towards the next location – where the whole game repeats itself. The pieces of fabric are among the most beautiful you’ll see, but the yarn that holds them together is frayed at best. Add to that the issues with the cartography and the slightly less expansive bookmarks than what the module would have warranted and you have a module that is more of a mixed bag than I would have liked. “The Reaping Stone” has some truly awesome, grim moments and iconic locales, but the meta-plot requires serious work on the side of the DM to keep from showing its weakness and thus ending the sense of urgency the players hopefully feel. In the end, my final verdict hence has to clock in at 3.5 stars, though I’ll round up to 4 for the purpose of this platform – just be aware of the rough edges in the production value department and the fact that the meta-plot needs serious work by the DM to produce the sense of gravitas it deserves and make the transitions from location to location more compelling.

You can get this module (or scavenge it apart for its contents…) here on OBS and here on d20pfsrd.com’s shop!