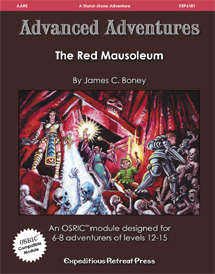 This review was requested by one of my patreons, who graciously bought the module and told me to finish it at my convenience.

Now, this is the second of the Advanced Adventures-modules released by Expeditious Retreat Press, and as such, it is not the latest offering of the author – James C. Boney moved on to create other adventures, which will be covered in due time. As with the first module and all in the series, the default rules system employed herein would be OSRIC. Also, like the first module, this chooses to deviate from formatting conventions, bolding magic items and spells, for example.This is not employed with 100% consistency, though.

The module introduces a new material, a kind of magical fabric that is as tough as metal, and it features three creatures: The illustrated Gehzin are basically telekinesis-using extraplanar frog folks with nasty diseases; harbingers are slain fallen paladins that have not atoned for their sins, revived by the forces of the abyss, and finally, shadowcaps are more of a hazard than a creature – the shrooms are my favorite critter here, as their spores render your incorporeal! Yeah, damn cool and something I’ll be using in games, regardless of system.

All right, this being an adventure review, the following contains SPOILERS. Potential players should jump ahead to the conclusion.

All right, only GMs around? Great! The premise of this adventure is rather simple: There have been undead excursions coming from the swamp and the PCs are sent in to fix this issue. After a trek through 15 miles of non-mapped swampland, the PCs arrive at the eponymous red mausoleum, ostensibly the source of the living dead roaming the land. The brief wilderness trek does come with a random encounter table, which is appreciated and feels “right”, in that it does not clutter the desolation of the swamp with humanoids, instead focusing on animals and vermin…including brain moles! This is smart, for it makes for a sharper contrast when the PCs actually find the complex.

They’ll notice that they’re in the right vicinity by redness oozing from the stones, coloring everything, which makes for some really neat visuals.

Now, the mausoleum was erected by a long gone civilization obsessed with blood and unlife, and as such, is not a nice place. A big plus here would be that the module doesn’t waste x pages depicting this civilization, instead opting for an indirect narration; the PCs get to piece together some aspects of how this society worked as they explore the complex. Provided they even get in.

You see, this very much is a module that not only is written for high level PCs, it also assumes appropriate player-capabilities, all without the GM having to constantly improvise. The complex does not hobble the PCs by artificially limiting their options, which is a huge plus. In fact, the module assumes that PCs and players have amassed a degree of competence during their adventures. So, if by any chance you managed to reach these lofty levels by just murder-hobo-ing your way through everything, you’ll suffer. What do I mean by this? Well, one of the best aspects of this adventure would be that, from the antechamber of the dungeon to a lot of bottlenecks of sorts, you’ll need to deal with puzzles. Not in the annoying way, mind you. The mausoleum has an array of defenses and these are often tied to obscure command words etc. – in short, you’ll finally get some use out of those divination spells. The module assumes that you’re using the like, and while there are ways for PCs to brute force these instances, we ultimately have a module here that asks the PCs to use their considerable resources. That’s a good thing and something high level modules often get wrong.

Better yet, the GM actually gets the command words spelled out, which may be a small thing, but it adds to the sense of the immersion when the players have to recite the pass phrase. The demands on well-rounded groups are also mirrored in the way in which dungeon progress is made: You see, the connections between levels are magical and require the understanding and use of some remnants of these days gone by; not true understanding, mind you, but rather a general concept – this is an altar, with this and that move, we can bypass it…

As a whole, this creates an interesting overall feeling that manages to evoke the sense of properly delving into an old complex. Anyways, these magical connections…they actually don’t last that long. If the PCs dawdle, they may well find themselves caught in the complex, forced to delve deeper. And yes, smart groups will have means to offset that, but I still considered it to be smart from a design-perspective.

Now, as far as random encounters go, the dungeon is very much a themed dungeon, in that the PCs will fight undead, undead, and, for a change, undead. In hordes. This is reflected both in the bosses and in the random encounters, which are btw. replenished pretty quickly…and there’s a reason for that built into the module as well, which is a big plus for me. The living dead don’t just pop up, after all. Anyways, the most remarkable non-undead encounter on the 3 dungeon levels that this adventure encompasses would be a tomb of honored knights, which, in a somewhat random move, houses a ton of creatures in stasis, which are consequently released in waves once the grave-robbers…her, I mean “adventurers” venture into the area. I am not a fan of the lay of stasis angle and the critters actually may end up fighting each other, which can make this a nice free-for-all. That being said, I wasn’t too keen on this encounter, as opposed to the exploration of the complex and the implicitly conveyed lore of the place. Which may also be a reason why I wasn’t too blown away by the presence of crypt things. The creature always seemed gimmicky to me and I have very rarely seen it used well. (TPK Games’ Caragthax the Reaver would be such an example.) Anyhow, these criticisms notwithstanding, the first dungeon level can be considered to be a success – it is flavorful and challenging.

Level 2, alas, is a slog/labyrinth. Level 2 is basically winding, claustrophobic catacombs with some spaces, where blocks react to the presence of good alignment creatures passing, sliding in place. Much to my surprise and in some form of minor inconsistency, the architects of the complex don’t use this feature to the full extent, imprisoning PCs etc. – instead of deadly, it just ends up as disorienting, which is probably the intent. The level is also crawling with undead and has precious few keyed encounters. It is, in essence, a level that exists solely as a war of attrition on PC-resources, which, per se, is a smart move for high level games. However, I really wished it had more going on. After the atmospheric first level, this one felt a bit more generic.

Level 3, then, would be the heart of the complex and a flooded passage may actually allow for escape, should the PCs find themselves in over their head. It is also here that we have the module’s most devious trap, which includes demons and a pocket dimension in a false crypt. And yes, potential for eternal imprisonment included. Combat-wise, this does sport the most memorable fight in the adventure: There is a ritualistic area, where a massive mandala on a raised pedestal channels negative energy, summoning hordes of the living dead to crawl from a pit, with a metal dome to keep its powers in check currently raised atop it. Lowering the dome can make the constant stream abate. This is very cool, and while harbingers and Gatheris, a level 21 cleric/level 19 magic-user lich have their abodes in the vicinity, I found myself wondering why they don’t join the fray here – it’d make more sense and be more climactic. Also, RAW, the lich may come with a buff-suite of sorts, but still deigns to fight the PCs more or less on his own, which, even in the lesser power-levels of OSR-gameplay, tends to be a bad idea for high level casters. Reliance on summoned aid doesn’t help as much and a caster in melee with a good fighter can be a pretty bad idea. Then again, perhaps this was intended, as resting in the complex is tough and the 2nd level’s war of attrition on the PCs can really drain their resources. Still, I think combat in the mandala-room would have been more remarkable and interesting.

Editing and formatting are good on a formal and rules-language level. I noticed no glaring issues. Layout adheres to an elegant, old-school two-column b/w-standard. The pdf sports a few solid pieces of b/w-artworks and comes fully bookmarked for your convenience. The complex comes with okay b/w-maps, but no player-friendly version is included, which constitutes a comfort detriment for GMs like yours truly who hate drawing maps and enjoy handing out cut-up map-segments to the PCs.

James C. Boney’s “The Red Mausoleum” does a lot right. It is obvious that the author knows the capabilities of high-level PCs first-hand and has experience handling such groups, which is a huge plus: The design of the complex doesn’t just nerf or hobble them, instead working WITH the vast options the PCs have. That is good indeed. From the antechamber throughout most of level 1, I was pretty hooked: The stark visuals of the red complex and the clever “archaeology” of sorts that is needed to progress managed to elicit a sense of wonder that I enjoyed very much. Alas, after level 1, the complex feels like the lack of wordcount left for the subsequent levels necessitated a less interesting take on the remainder of the mausoleum. A good GM can make level 2 feel really claustrophobic and dangerous and level 3’s mandala-room is amazing, but in contrast to how the first level felt, they are less of a unique complex, and feel more like a standard evil-necro-lair type of complex.

The unique tidbits take a back-seat to defeating undead, undead…and then, even more undead. I don’t object to that necessarily, but it is evident in the writing of level 1 and in the glimmers where these become more unique, that they could have been more. I really enjoyed how this module started, but not so much how it progresses. That being said, design-wise, the subsequent levels aren’t bad and work in the context of the complex, they just aren’t as remarkable. I do NOT want the civilization explained, mind you; but some effects for the seeping red, some global tricks, perhaps blood locks or the like…the visuals and theme of the complex imho deserved more in the lower levels. This has the makings of something remarkable, and then settles for a solid, if conservative complex. Hence, my final verdict will clock in at 3.5 stars, rounded down for the purpose of this platform. If you’re willing to tinker with the complex a bit, you’ll certainly find some cool ways to expand it.