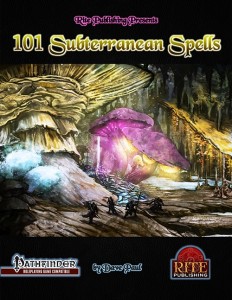 The third book of Dave Paul’s terrain-centric spell-supplements clocks in at a massive 49 pages, 1 page front cover, 1 page editorial, 1 page advertisement, 1 page SRD, leaving us with a massive 45 pages of content, so let’s take a look!

Okay, so subterranean spells, hmm? The theme itself is something near and dear to my heart – I still consider the lack of support for spells interacting with/requiring faerzress in the Forgotten Realms a criminally-negligent oversight, so let’s take a look at what type of spells we can find within these pages!

After the obligatory spell-list by class, we dive right into the new array of spells Dave Paul has crafted -and begin with a theme of aberrant magicks – and they do sport some rather nasty tricks: What about a 2nd level spell that grants you all-around vision via red-eyed tentacles growing from your neck and shoulders, ones that also show you the current emotional state of creatures of your subtype, albeit only within 5 ft.? Yes, this is pretty cool…and powerful. Indeed, it may be too powerful. Granted, the spell’s visuals render it less than subtle – but in the confines of the underdark and its weird creatures, it is powerful. The issue here would be that the spell allows for the detection of shapechangers and the like – you can’t detect the emotions of targets of other types, nor can you share thoughts with creatures you touch via this spell. This would be less of an issue, were the spell not transmutation, the emotion-detector a supernatural ability. There is next to no option to bypass/fool this one. No exchange, reliable detect. Worse, the spell can be expended via a touch attack that save-or-suck renders the recipient unconscious for 1d4+1 rounds. UNCONSCIOUS. Remember, this is a 2nd level spell. For me, this is one step too far.

On the plus-side, though, the spells also allow for some unique effects: Take the lvl 9 aberrant mind: Beyond the increase of Int/Cha-based skills and checks, this one allows you to act out that power-fantasy from editions long gone, using kind-of-psionic-y, devastating mental assaults. On the even more awesome side would be a kind of ritual: Know that undead thing you just defeated? Well, if you know a certain spell from this book, you can pulverize the skull of the undead and expend A LOT of gold to acquire a spell of up to 6th level usually unavailable to you. While this sounds pretty much like a textbook broken spell, the narrative ramifications are intriguing and the spell, at lvl 7, costly and limited enough to imho work pretty well.

We all know it – the trope of the ageless, ancient man who has sustained his life beyond the limitations of a usual life-span. Well, for only 3 skum tears, casters capable of 8th level sorcery may now prolong their life via ageless…to an extent, for the fragility such magic entails in the tropes is represented by negative levels, which you can’t cheat out of – you may delay the reaper, but you can’t cheat him. Variant summoning of ascomoids, an ability that lets you detect the blood of the living. Speaking of the living – there are rather intriguing spells herein that vary in their effects depending on the target: Casting burning bones on a living creature, for example, nets the target significant pain. Undead or constructs made of bones instead take damage and the spell can also be used to damage unattended bones. I particularly enjoyed options to cripple burrow speed (or breathing while burrowing), providing fixes to petty glaring logic holes that burrow speed to me always represented.

Adaptation to the hostile underground terrain is also a theme of this book – including thematically fitting components that prevent the undue spamming of such magics. Perhaps you’d rather assume the form of a cave troll or call a svartalfar assassin to take down your foes in a variant of planar ally? Jup, thematically, pretty cool, though the latter feels a bit like filler to me.

The same can thankfully not be said about the curse of claustrophobia or the collapsing tunnel trap… I am very weary of Crypt Sight, a cantrip-version of detect undead, which may not showcase auras, but it does render undead ambushes pretty hard – that spell is not gonna see use in my campaign. That being said, the spells also feature some mechanically innovative aspects – like doubled range when cast in the correct surroundings or the requirement of targeting commanded undead when cast as an arcane spell -it’s small nods and tricks like this that add significantly to the flair of the respective spells provided. The highly complex and well-crafted walls of crystal should be considered a star herein.

Balancing options via components are some of my favorites and an upgraded form of mnemonic enhancer could be considered an excellent example why this is great: The power the spell offers is significant, but it does so at the cost of a scroll and a rare component, allowing for sufficient GM-control, even in the case the spell falls into the hands of the players. There also are some intriguing double-edged swords herein – take Derro’s Madness. The spell is a curse that cripples your Wis and enhances your Cha – significantly. To the point, actually, where it may seem more like a buff than a curse. However, it also afflicts the target with a con-damage-causing weakness to sunlight and makes the target incessantly obsess over other creatures not being affected by sunlight thusly. From a mechanics point of view, the significant cha-boost demands to be cheesed by cha-based characters. However, the obsession and weakness are roleplaying potential galore…and should make PCs think thrice before casting this curse on an ally – especially considering the derro’s predilection for rather…unpleasant experimentation…

What about a variant of invisibility right between it and its improved brethren, which allows for tactical readied actions versus the adversary before he vanishes again? Indeed – this one is one of those “why has no one done this before???”-moments. Want to really piss off that vain dark elf? What about an otyugh-transformation-curse? Or a truly astounding spell: Ignore Metal. What you get is a highly complex, codified spell that gets a VAST array of corner-cases right. Granted, I would have liked it to explicitly spell out more distinctly the fact that e.g. spears still deal full bludgeoning damage, but the fact that e.g. molten lead, dragons with metal claw-supplements and the like are covered, still render this a spell that feels MAGICAL. Complex, versatile and awesome. And it can lead to hilarious PC-deaths. You’ll see when you read the spell… *cough* fall through the metal fortress…*/cough* Also downright brilliant: Fooling foes with tremorsense by imprinting tremors…absolutely glorious! Less versatile, but also pretty cool – selective silence that allows the dead to speak! Or what about FINALLY a spell-representation of the near-death-experience that is featured in so many initiation-rites of death-cults? Need some guarding spells versus those upper-worlders? Well, there is a means to supplement e.g. shriekers or the like via sonic damage. I also really like the low-level spell that allows you to conjure forth moisture from the walls… And yes, there are a lot of undead-related spells.

Editing and formatting are top-notch, I noticed no significant glitches. Layout adheres to a neat two-column full-color standard with beautiful full-color artworks and a dark, stone-like border. The pdf comes fully bookmarked for your convenience.

I feel like a colossal hypocrite as I’m writing this – why? Because, quite frankly, the above text does not properly sum up how inspiring and awesome the vast majority of the spells herein are. Dave Paul has a huge talent for the creation of thoroughly unique, glorious spells that feature a level of detail and complexity that hearkens back to a sense of realism often lost in current min-maxy circumstances. Via numerous design-choices, balance and versatility offer a diverse selection of unique tricks that dwarf almost every supplement of spells you can name in quality and ambition. You should be aware that my criticism voiced above must be understood in context with Dave Paul’s almost perfect forest and swamp spells, which single-handedly made me look forward to new spells again, which brought the sense of the magical and awesome back to my reception of spells. The two predecessor books are pretty much the pinnacle of what you can expect from any collection of spells.

Against these predecessors, this installment feels like it stumbles a bit – stumble, mind you – it doesn’t fall. This book still contains more excellent and mechanically sound, innovative high-caliber spells than 99.9% of spell books you can get for any iteration of d20-based gaming – but, at the same time, it does have a couple of spells that overshoot their power-level by a margin. Unlike the previous two books, there are some spells herein I’d advise against, some that will not find their way to my table.

This fact alone made me think for a while, I’d settle on a final verdict in the higher echelons, but not at the top of my rating scale…but then again, the issues are few and far in-between…and (mostly) are based on my own tastes and my admittedly insane expectations of the Dave Paul’s offerings by now. Quite frankly, it would be unfair to this book to only hold it to its direct predecessors, not to the standard of the collective of spell-books out there. And in the general, broad comparison, this still mops the floor with the vast majority of its competitors. Ultimately, any rating below 5 stars would be a disservice to the book – get this. It’s an awesome book and well worth the asking price. It may not be as flawlessly perfect in its balance as the predecessors, but it still transcends the basics of what one can expect and provides utterly unique, complex, options.

You can get this collection of inspired, complex spells here on OBS and here on d20pfsrd.com’s shop!